John Dillon posted as follows on the Medieval Religion discussion group; I have added occasional notes in [ ]

Quintinus of Vermand (Quintin, Quentin; d. late 3d cent., supposedly) is the martyr of today's Saint-Quentin (Aisne) in Picardy. His cult there is already recorded by St. Gregory of Tours in the sixth century.

The earliest of his many legendary Passiones (BHL 6999-7012) is commonly dated to the eighth century. According to this account, Quintinus, the son of a senator, was a Christian inhabitant of Rome who had traveled to northern Gaul as a missionary. During a persecution under Maximianus he was arrested on the orders of a Roman official named Rictiovarus or Rictius Varus (the villain of numerous Passiones from northern Francia) and was cruelly tortured in various ways: of these, the one most frequently depicted in the later Middle Ages was having iron nails and iron stakes driven into his body. Quintinus' sufferings ended when he was decapitated at Augusta Viromanduorum, a Roman-period predecessor of Saint-Quentin thought to underlie the modern city's outlying canton of Vermand. His body was then secretly deposited in the river Somme, where it remained incorrupt for about fifty-five years until its miraculous discovery by a Roman matron named Eusebia. Thus far BHL 6999.

Other accounts relate the translation of Quintinus' remains over a century later to a basilica where their location came in time to be forgotten and their subsequent rediscovery by St. Eligius in the seventh century. One may read about the latter finding in Jo Ann McNamara's English-language translation of Dado of Rouen's Life of St. Eligius (scroll down to II, 6):
http://www.fordham.edu/halsall/basis/eligius.html
Excursus: one thing that Dado does not tell us is how St. Eligius (Éloi) advised Dagobert I on matters pertaining to the king's wardrobe (or perhaps he did tell us but it's in one of the lacunae). For that, one has to go to the song "Le bon roi Dagobert":
http://en.wikipedia.org/wiki/Le_bon_roi_Dagobert_%28song%29
An illustrated, French-language summary of Quintinus' legend is here (better views of the illuminations are linked to in "images", below):
http://stqvillhist.free.fr/068Legende.htm


5) taken in chains to Augusta Viromanduorum, where he is brought before Rictiovarus (p. 38): d) as depicted (at left; at centre, St. Michael the Archangel; at right, St. Romanus of Rouen) in an earlier fourteenth-century glass window (w. 309; before 1325) in the cathédrale Saint-Pierre in Beauvais:

i) as depicted (martyrdom) in the earlier fifteenth-century Hours of Jacques Cauchon and Jeanne Bohais (c. 1440), one of the items in the Arcana Collection announced for sale at an auction at Christie's on 7. July 2010:

j) as depicted (at right, martyrdom; at left, St. Sebastian) by André Robin and workshop in a mid-fifteenth-century glass window (w. 115; 1450s) in the north transept of the cathédrale Saint-Maurice in Angers: 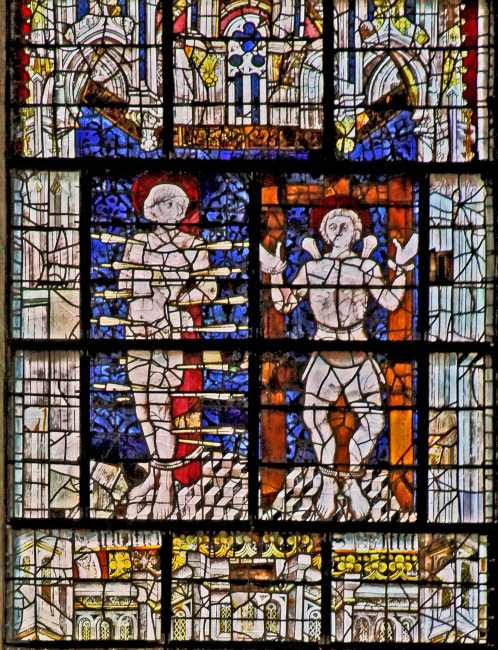 k) as depicted (at left, martyrdom; at right, his body discovered by Eusebia) in a later fifteenth-century copy from Bruges of the Legenda aurea in its French-language version by Jean de Vignay followed by the Festes nouvelles attributed to Jean Golein (c. 1460-1470; Mâcon, Médiathèque municipale, ms. 3, fol. 11v): 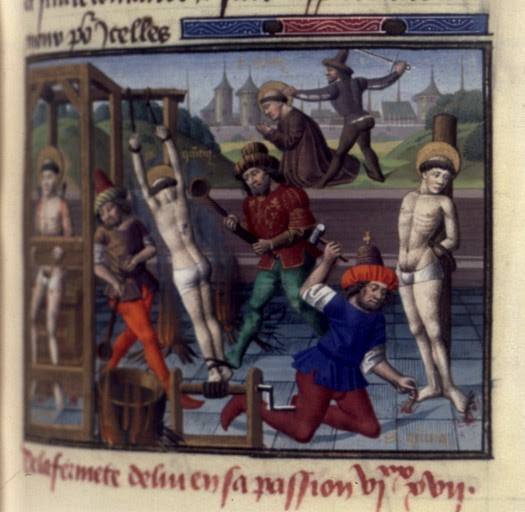 http://tarvos.imareal.oeaw.ac.at/server/images/7013376.JPG
2) being stripped and then flogged:

q) as depicted (martyrdom) by Jacopo Pontormo on an early sixteenth-century canvas processional banner (1517) in the Pinacoteca comunale of Sansepolcro (AR) in Tuscany: