John Dillon posted this piece on the Medieval Religion discussion group about another French saint whose feast falls today besides St Thérèse of Lisieux, St Remigius, whose baptism of King Clovis in 496 was the crucial event in the creation of a Christian Kingdom of France:

St Remigius of Reims (d. 532 or 533; in standard French, Rémi, Rémy; at Reims, usually but not always Remi or Remy), the "apostle of the Franks", is said in his Vita by "Fortunatus, bishop of Poiters" (BHL 7150; it is not by St. Venantius Fortunatus) to have been of noble birth and to have been elected bishop of Reims at the age of twenty-two. St. Gregory of Tours' Historia Francorum is our first narrative source for his having baptized the Frankish King Clovis. Gregory credits him with various miracles, one being the suppression of a fire threatening to consume his city. Remigius' originally ninth-century Vita by Hincmar of Reims (BHL 7152-7164) makes him a member of a prominent noble and ecclesiastical family and adds other miracles, including that of the ampule of chrism miraculously provided for Clovis' baptismal ceremony.

Florus of Lyon and Hincmar both give January 13th as Remigius' dies natalis; this is the date under which he is commemorated in the Roman Martyrology as revised in 2001. His traditional feast on October 1st, removed in 1969 from the general Roman Calendar but still observed in the diocese of Reims-Ardennes, commemorates his translation in 1099 from Reims' cathedral to the abbey church of Saint-Remi. Remigius' putative remains repose in the latter's largely eleventh to thirteenth-century successor, today's basilique Saint-Remi.

Some period-pertinent images of St. Remigius of Reims (the geographic suffix distinguishes him from a sainted archbishop of Rouen):

a) as portrayed (three miracles: restoring to life a girl from Toulouse; replenishing a wine barrel; the heavenly dove providing chrism for Clovis' baptism) on a later ninth-century ivory book cover in the Musée de Picardie, Amiens: 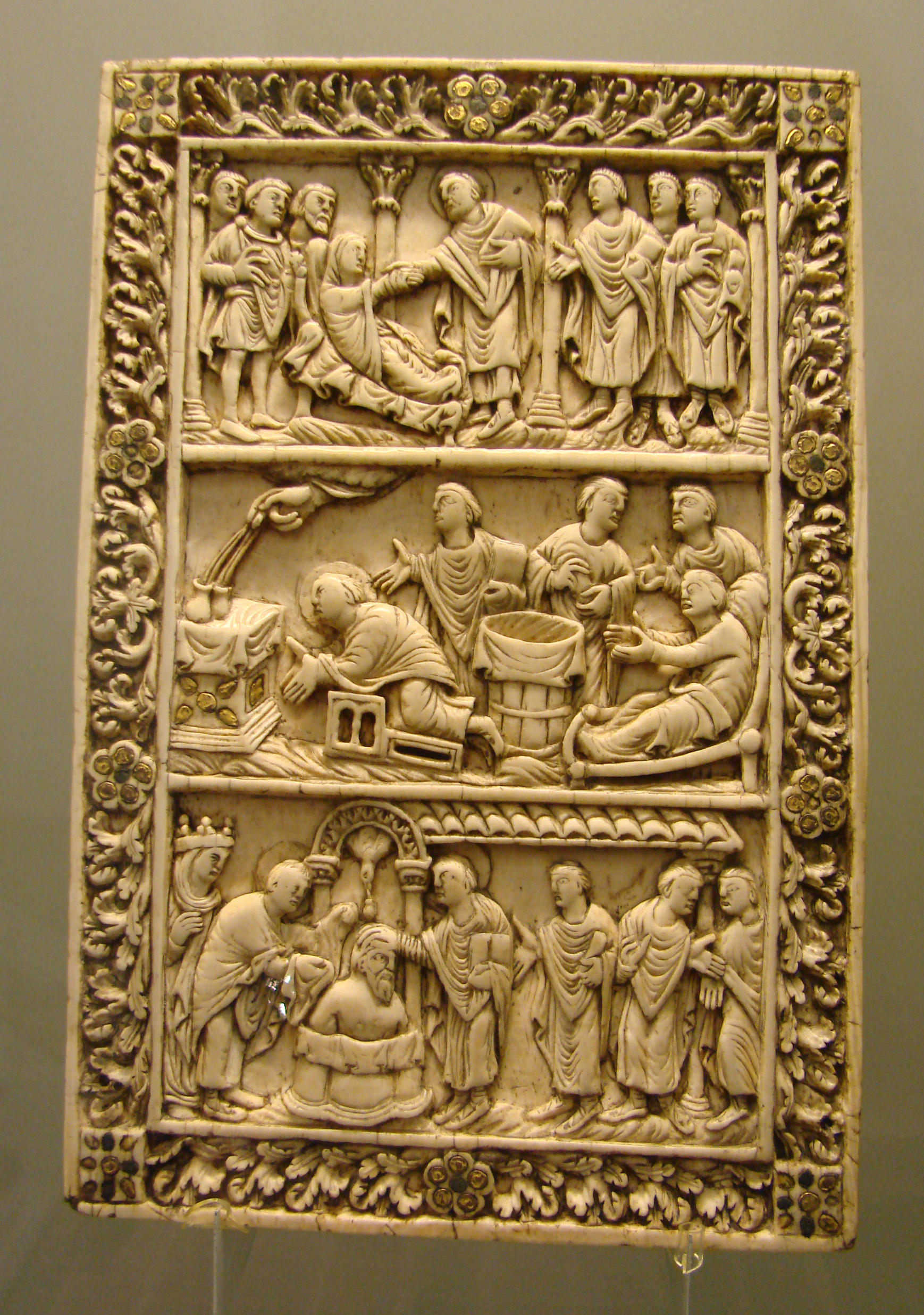 c) as portrayed on an early thirteenth-century great seal (in use in 1219) of the abbey of Saint-Remi in Reims (cast from the Archives Nationales, Paris):

e) as portrayed several times on the originally earlier thirteenth-century "Portail des Saints" (c. 1220-1230) of the north transept of Reims' cathédrale de Notre-Dame (NB: Many of the carvings on this building were reworked in the nineteenth and twentieth centuries):
1) Second register from top (operating miracles):

http://peregrinations.kenyon.edu/photobank/30.jpg
2) Just right of centre (at the baptism of Clovis):

f) as depicted in a panel of a later thirteenth-century glass window (c. 1270; w. 207) in Strasbourg's cathédrale Notre-Dame: 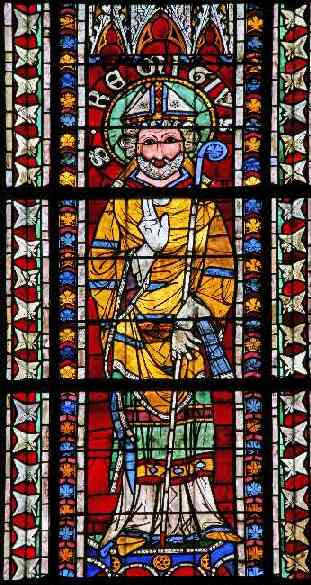 h) as portrayed (second from right in another scene of Clovis' baptism) in the "Galerie des Rois" on the originally fourteenth-century west front of Reims' cathédrale de Notre-Dame (NB: Many of the carvings on this building were reworked in the nineteenth and twentieth centuries):

i) as portrayed in high relief (exorcising the girl from Toulouse) in a fourteenth-century sculpture in the Musée Saint-Remi in Reims:

k) as depicted in a mid-fourteenth-century copy of a French-language version of Richer of Saint-Remi's tenth-century Vita of Remigius (Brussels, KB / BrB, ms. 5365, fol. 1r):

http://tinyurl.com/qhtnevt
For the locations in this now digitized ms. of other illuminations depicting Remigius see:
http://belgica.kbr.be/fr/coll/ms/ms5365_fr.html

l) as depicted (rear register, second from left) by Giottino in his later fourteenth-century Pietà of San Remigio (between 1360 and 1365) in the Galleria degli Uffizi, Florence: u) as depicted in a late fifteenth-century breviary according to the Use of Langres (after 1481; Chaumont, Mediathèque de Chaumont, ms. 33, fol. 447v):

w) as depicted (sixth from right, baptizing Clovis) by the Master of St. Giles in a late fifteenth or early sixteenth-century panel painting (ca. 1500) in the National Gallery of Art, Washington, DC:

x) as depicted (at centre, having miraculously replenished a wine barrel) in an early sixteenth-century panel painting of Swiss origin (c. 1500-1505) in the Metropolitan Museum of Art, New York: 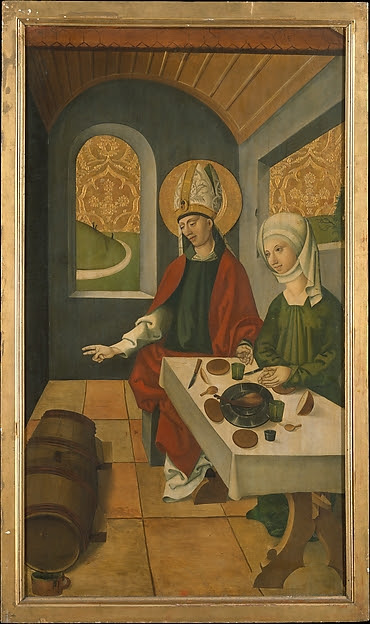 y) as depicted in two early sixteenth-century tapestries (completed by or in 1509) in the Musée Saint-Remi in Reims:
1) at bottom centrre and bottom right (infancy scenes):

http://tinyurl.com/p5rexao
2) at bottom right (miracle of the fire of Reims):