Today is the 590th anniversary of the death in 1425 of Ralph Neville, first Earl of Westmorland.

The Earl was a major figure in the politics of the country as well as of northern England. He is buried in Staindrop church, close to his family seat at Raby Castle in county Durham. His tomb, with effigies of him and his his two wives - who are buried at the church in Brancepeth and in Lincoln cathedral respectively - has been moved from its original place in the middle of the choir to the west end of the church where it is next to the monuments of the later lords of Raby and nineteenth century Dukes of Cleveland.

The head of the Earl's effigy 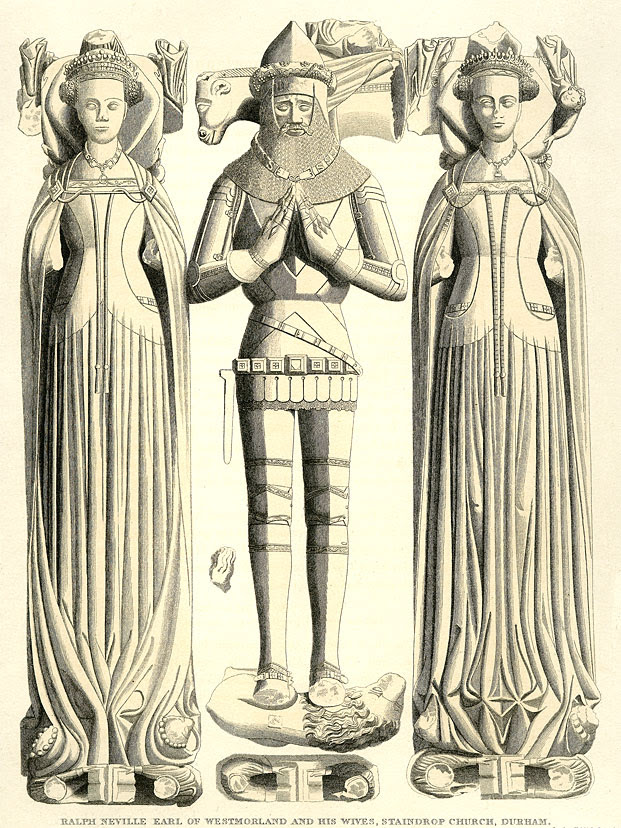 The anniversary of his death give me an opportunity to post images of him and his second wife and all his children at prayer - images of considerable charm and also not as well known as they should be. To understand them it will help if I also reproduce from the second link above a list of his numerous progeny - the Earl was clearly a dutiful husband:


Neville married firstly, Margaret Stafford (d. 9 June 1396), the eldest daughter of Hugh Stafford, 2nd Earl of Stafford, and Philippa Beauchamp, the daughter of Thomas Beauchamp, 11th Earl of Warwick, by Katherine Mortimer, the daughter of Roger Mortimer, 1st Earl of March. They had two sons and six daughters:
Neville married secondly, before 29 November 1396 Joan Beaufort, the widow of Robert Ferrers, 2nd Baron Ferrers. Joan was the legitimated daughter of John of Gaunt, 1st Duke of Lancaster, by his mistress and later third wife, Katherine Swynford. They had nine sons and five daughters:
A very well connected family indeed, with links to so many of the leading families of the time.


The collars of park palings, with a stag, are clearly a family livery badge; on his tomb the Earl wears the Lancastrian SS collar.

Unfortunately the reproductions on line of the other page are slightly less good, both having been cropped: Alas the adage that the family that prays together stays together was not true for the Nevilles - as the ODNB life shows the Earl all but disinherited the family he had with his first wife in favour of his second family, and in the later conflicts of Lancastrians and Yorkists the two branches were on seperate sides more often than not, with the elderWestmormnd branch remaining loyal to the Lancastrian dynasty, and the second family, despite their Beaufort ancestry, being Yorkist - including, of course, Duchess Cicely herself.