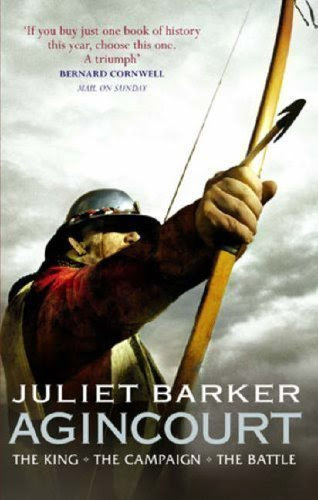 In my post some months ago on Prof. Anne Curry's book on the battle I described Juliet Barker's book as being more popular. That it perhaps is, but not in any slighting sense. It does perhaps set the battle and the society that existed at the time in a way that is perhaps a little more approachable to the non-specialist reader.

Although I would have some quibbles about points Juliet Barker makes, especially on church matters, her book is splendid - very readable and full of details, one that self-consciously looks at individuals and how they prepared for the campaign, such as the Earl Marshal equipping himself with armour, but not always from the same supplier, and it is a gripping read, which touches on those emotions Agincourt still evokes in the English, a point to which I referred in a recent post.

For anyone wanting to know about the battle or the wider campaign, or the military society of the time this is, perhaps, the book to read. When first published it was the fourth best selling history book of the year ( which also tells you something about the continuing fascination with the battle) and richly deserved its success.

It is quite a page turner, gives one plenty to think about - such as firing off ten arrows inside a minute to be able to qualify as an archer - and catches the sheer emotion of the success against the odds of King Henry V and his men in 1415.