Vestments and the Gunpowder Plot


From Supremacy and Survival - adapted: 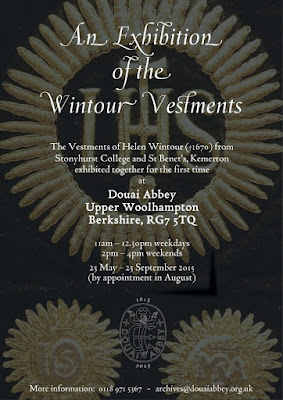 From Friday, October 16, 2015, through Monday, April 11, 2016, Auckland Castle will present an exhibition titled "Plots and Spangles":

The Guy Fawkes story comes to life through the resplendent embroidered vestments created by Helena Wintour, daughter of a Gunpowder Plot conspirator.

On the eve of the Gunpowder Plot's planned date 410 years ago, there will be a presentation at the castle:

Jan Graffius, Curator at Stonyhurst, will present an examination of Helena Wintour's embroidered vestments and their Catholic iconography. The talk will look at the religious and cultural resources available to recusant laity in the decades after the failed Plot of 1605, and Helena's close association with Jesuit spirituality. The complex iconography of her beautiful embroideries draws on many sources, from botanical prints to Counter-Reformation confraternities and English metaphysical poetry.

Helena's remarkable life story and that of the creation and survival of a unique set of 17th century embroideries is a compelling, romantic and tragic tale, which culminates in the triumphal re-uniting of her divided life's work at Auckland Castle, in the exhibition 'Plots and Spangles: The Embroidered Vestments of Helena Wintour’ that opens in October 2015.

Sophie Holroyd presented a paper at 2002 conference on Helena Wintour's vestments titled "Rich Embroidered Churchstuff" that was subsequently published in Catholic Culture in Early Modern England from the University of Notre Dame Press. Holroyd had written her PhD thesis at the University of Warwick on Embroidered rhetoric: the social, religious and political functions of elite women's needlework, c.1560-1630, also in 2002.

According to its website, Auckland Castle:
is one of the UK’s most important historical buildings. Since the days of the Norman Conquest in the 11th Century, Auckland Castle has been a seat of power. For almost 900 years, it has been the palace of the Prince Bishops of Durham and although the site where Auckland Castle now stands has seen numerous changes, few will have been as far reaching and visionary as those which are set to take place in the 21st Century.

In May this year a similar exhibit was held in the library at Douai. St. John's College, Oxford posted this notice:

This year sees the exhibition at Douai Abbey of another collection of English vestments from the early modern period. The Wintour Vestments date from around 1650 and were embroidered by Lady Helen Wintour, daughter of Robert Wintour, one of the Gunpowder Plot conspirators. The set of vestments was split in about 1670 and will be exhibited together for the first time at Douai (near Newbury) from 23 May until September. The opening hours for the exhibition will be 11 a.m. - 12.30 p.m. from Monday to Friday and 2 p.m. to 4 p.m. at weekends.
Posted by Once I Was A Clever Boy at 14:00