John Dillon posted about him on the Medieval Religion discussion group as follows:

Callistus was elected Bishop of Rome in 217, succeeding pope St. Zephyrinus. Our chief sources for him are the tendentious Philosophoumena or Refutatio omnium haeresium of an Hippolytus who tends be called Hippolytus of Rome [ for whom see Hippolytus-of-Rome] and the not altogether reliable Liber pontificalis. According to Hippolytus, Callistus had been born into servile status and had twice been punished for crimes. In the second instance he had been sentenced to the mines in Sardinia and probably at that time ceased to be the property of his former master, a Christian of the imperial household. Some nine or ten years after Callistus' release from the mines Zephyrinus put him in charge of the Christian cemetery at Rome that still bears Callistus' name. Herewith an illustrated, Italian-language page on the cemetery of Callistus:
http://it.wikipedia.org/wiki/Catacombe_di_San_Callisto

In his brief pontificate Callistus condemned the theologian Sabellius for heresy and had to endure accusations of similar purport from the aforementioned Hippolytus, who set himself up as a rival bishop of Rome. Callistus died under Alexander Severus, who is not reliably known to have persecuted Christians, his activity in that regard being transmitted solely in Passiones of legendary character.

Kevin Jones of the Dome of Home website also posted about St Callistus as follows:

Most of what we know of Callistus comes from attacks by his contemporaries, notably Tertullian and the antipope Hippolytus.

As a young slave Callistus was put in charge of a bank by his master Carpophorus, in which the brethren and widows lodged money. Callistus lost it all, and fled. When his master caught up with his ship Callistus jumped overboard to escape capture but was saved from drowning. He was given the punishment reserved for slaves, that of turning the pistrinum or hand-mill. His creditors got him released in the hope that he could retrieve some of their money, but when he tried to get back some of the money he had lent to Jews the result was a fight for which he was re-arrested. He was denounced as a Christian and was condemned to work in the mines of Sardinia (thus, incidentally, ceasing to be the slave of Carpophorus). Marcia, a mistress of the Emperor Commodus, obtained the release of the Christians including Callistus. His health was so weakened that he was sent to Antium to recuperate and was given a pension by Pope Victor I.

Somehow, from a weakened ex-slave in receipt of a invalidity pension, Callistus rose to be archdeacon, had charge of the Roman catacomb which now bears his name, and ended up as Pope. The oppressed Church of the early third century had more important things to do than keep detailed archives of its decision-making processes, but we can be sure that Tertullian’s story that Callistus obtained influence over the ignorant, illiterate and grasping Pope Zephyrinus through bribes is just polemical fiction.

What so irritated Tertullian and Hippolytus and made them so keen to vilify Callistus is what made him such an important figure in the history of the Church. The question of what to do about repentant sinners was a matter of intense debate and dissension, and many of the violent splits in the Church of the early centuries hinged on this very point. What were you to do if someone committed a serious sin? The rigorists – we might call them the “slip once and you’re damned” school – held that once you had done such evil acts you were for ever separated from the true, the pure Church, and there was no way back. Callistus decreed that sinners – for example, fornicators and adulterers – could be readmitted to communion if they repented and did penance for their sin. Callistus based the theology of his decree on the power that Christ gave to Peter and his successors, both to bind and to loose. Tertullian and Hippolytus argued that this power had been given to Peter personally and could not be passed on, so that Callistus’ decree was an innovation, and invalid. They similarly accused him of reprehensible laxity in other matters of Church discipline.

Callistus’ gift to the Church was crucial in the arguments of the fourth century, where the Donatist schism in Africa arose precisely over the question of what should be done about those who, during the persecutions of Domitian, had given up the sacred Scriptures to the authorities – or, conversely, about those who had flaunted their Christianity so as to attract prosecution, imprisonment, and consequently notoriety and admiration among the Christians. The calm good sense shown by orthodox bishops (sometimes patchily but ultimately successfully) has its roots in this manifestation of charity and mercy by Callistus.

Not much is known about how Callistus died. He is the earliest pope found in a fourth-century martyrology, but details are scarce. Since he lived in a time of peace under the Emperor Alexander Severus, whose mother was a Christian, he may have been killed in a riot.

Catholic Online has an article about him at St. Callistus I

John Dillon had this to say about the development of the cult of St Callistus and the distribution of his relics:

By the earlier fourth century he had come to be considered a martyr. The Depositio martyrum of the Chronographer of 354 enters under today Callistus' laying to rest at a milestone that accords with the location of the cemetery of Calepodius. The latter is given as the site of Callistus' burial by both the Liber pontificalis_ and Callistus' legendary Passio (BHL 1523; oldest witness is of the ninth century; a condensed version in hexameters is in the earlier to mid-tenth-century De triumphis Christi in Italia of Flodoard of Reims). Callistus' remains are said to have been translated, perhaps by Pope Gregory III (731-741), to Rome's church of Santa Maria in Trastevere where later Pope Gregory IV (827-844) gave him the honor of a re-burial in the church's apse.

In 854 relics believed to be those of Callistus were translated by Count St. Evrardus (Everardus) of Friuli to the monastery he had founded at today's Cysoing (Nord) in French Hainaut. The monastery, which took Callistus' name and which lasted until 1792, became a dependency of the church of Reims in 892. Callistus' relics, teste Flodoard in his Historia ecclesiae Remensis, were translated thither in the same year and were laid to rest in the then cathedral next to those of St. Nicasius of Reims.

Since the early fifteenth century a head thought by some to be that of Pope St. Callistus I has been in St. George's Chapel of Český Krumlov Castle, Český Krumlov (in German: Böhmisch Krumau) in what's now the Czech Republic:
http://tinyurl.com/3935dbt

Some period-pertinent images of Pope St. Callistus I:

a) as portrayed in an earlier thirteenth-century statue on the trumeau of the central portal of the north transept of the cathédrale Notre-Dame in Reims:

The scene over the door on the right is the Baptism of Clovis, which I wrote about in my recent post about St Remigius - Clever Boy

The Clever Boy thinks this is a very interesting figure, showing how an earlier thirteenth century Pope in full vestments would appear. The Papal tiara has only one circlet and rises as a cone to its finial. On his breast the figure is wearing a rationale, an episcopal ornament deriving. I think I am right to say, from OT High Priests, and now worn by only four diocesans, including the Archbishop of Cracow. If he is wearing the distinctive Papal fanon that is not visible, and presumably would have been worn under the chasuble.

c) as depicted (third from left) in the late thirteenth-century apse mosaic (c. 1290; attributed to Pietro Cavallini) of Rome's Santa Maria in Trastevere: 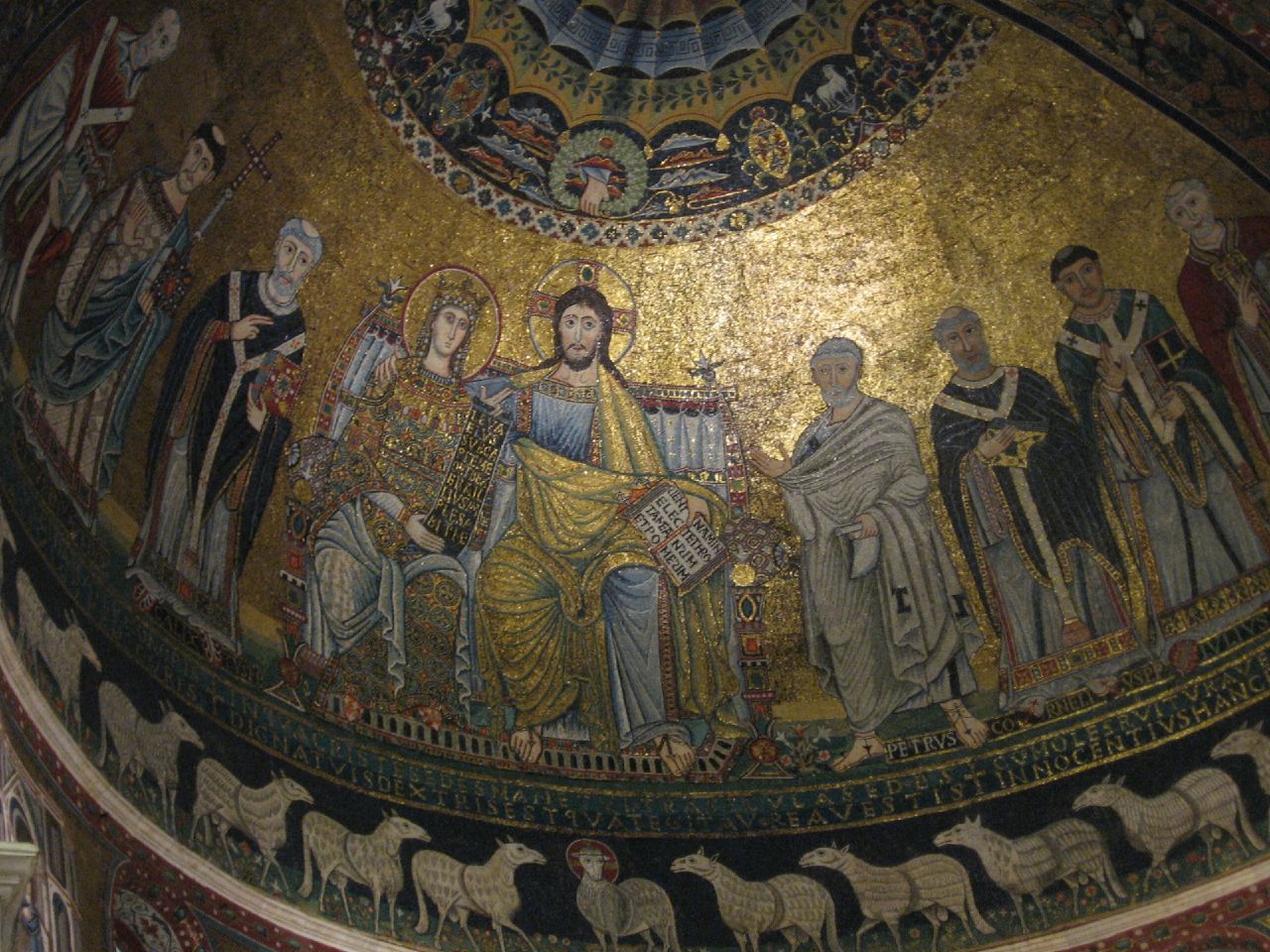 d) as depicted (promulgating his supposed decree mandating fasting in all four seasons [a spurious text transmitted in the False Decretals]) in an earlier fourteenth-century copy of the Legenda aurea in its French-language version by Jean de Vignay (c. 1326-1350; Paris, BnF, ms. Français 185, fol. 201r): 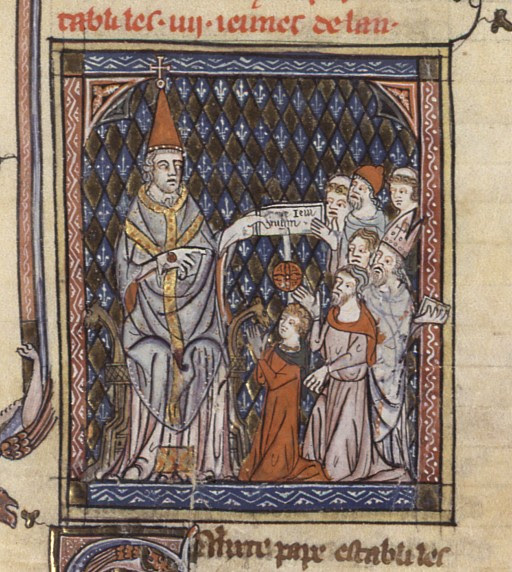 e) as depicted (at right, promulgating his supposed decree on fasting in all four seasons) in an earlier fourteenth-century copy, from the workshop of Richard and Jeanne de Montbaston, of the Legenda aurea in its French-language version by Jean de Vignay (1348; Paris, BnF, ms. Français 241, fol. 60r):
http://tinyurl.com/2dc984p 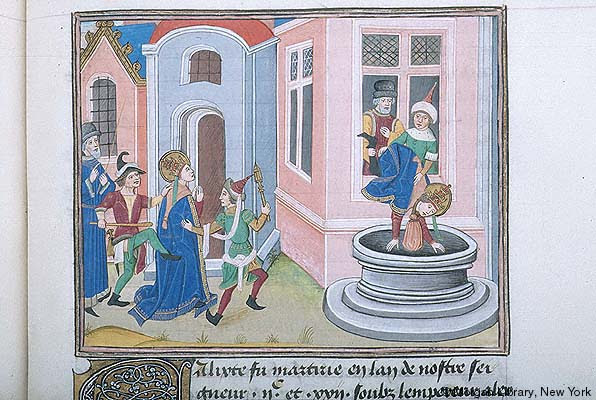 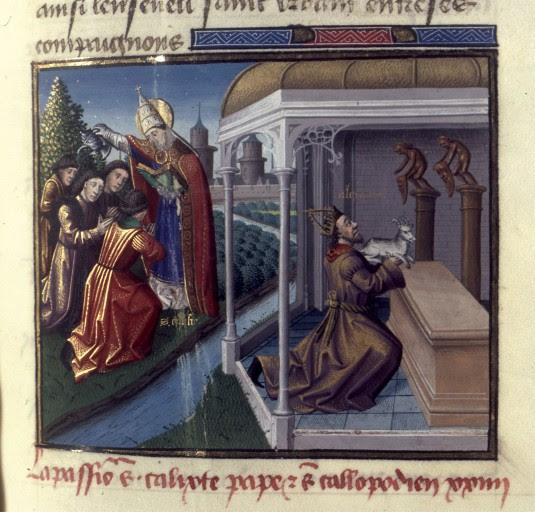 The Clever Boy will add that In the east window of the chapel of St Calixtus in the south transept of Wells cathedral is a handsome early twentieth century figure of the saint complete with Papal tiara. The dedication of the chapel may well reflect the presence at the nearby abbey at Glastonbury of relics of St Callistus in the middle ages.