I have lifted this from John Dillon's post on the Medieval Religion discussion group, with a few minor alterations and additions:


Today, October 10th, is the feast day of St. Gereon and companions, legendarily members of the Theban Legion who were not at Agaunus with St. Maurice but who voluntarily submitted to the Emperor Maximian in Köln (Cologne) and were executed there.

Some views of their church in Köln, the Basilika Sankt Gereon:

View from the west

View from the east
http://www.romanische-kirchen-koeln.de/index.php?id=29
http://www.sacred-destinations.com/germany/cologne-st-gereon
https://de.wikipedia.org/wiki/St._Gereon
A virtual tour (use the links below the plan [at bottom of the page]):
http://www.stgereon.de/st-gereon-72.html

According to the late-eleventh or very early twelfth-century Vita sancti Annonis archiepiscopi Coloniensis, St. Helena had founded this church. Here is a view of an uncovered fresco from 1190/1191 over the entrance to the Confessio with Gereon at left and Helen at right (holding the earliest known representation of the church's polygonal nave, the Dekagon, completed in 1227): 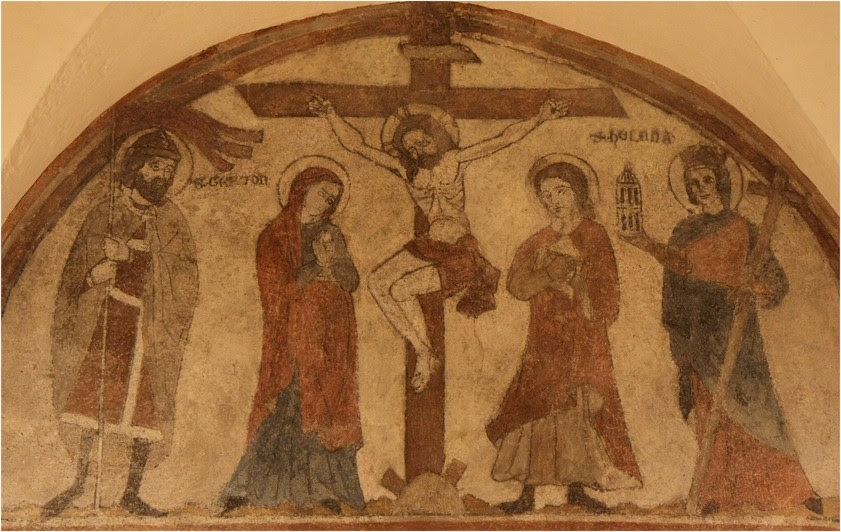 http://tinyurl.com/ncppoo4
Context within the church (the sarcophagi contain skeletal remains unearthed in an Inventio in 1121 and proclaimed to be those of Gereon and some of his companions):
c8.alamy.com/comp/DTAC4A/kln-st-gereon-krypta-DTAC4A.jpg

a) Gereon (at left?) and another martyr of the Theban Legion (Maurice? Gregory Maurus?) as depicted in a mid-thirteenth-century fresco in the baptismal chapel of Köln's Basilika Sankt Gereon: 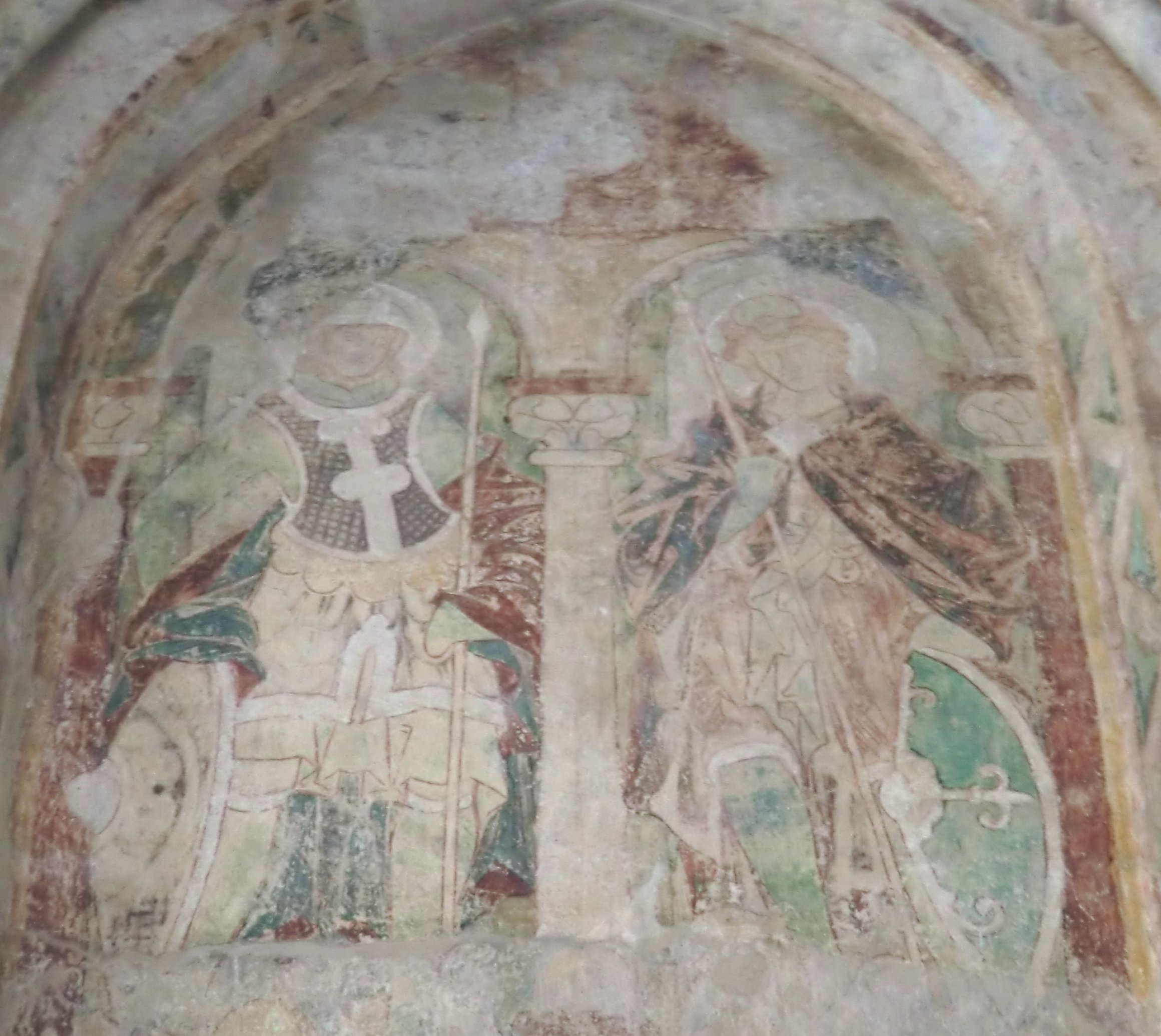 https://www.heiligenlexikon.de/Fotos/Gereon_von_Koeln6.jpg
The fresco in an early twentieth-century grayscale drawing:

http://koelner-dom.de/index.php?id=17386&L=1
c) Gereon (second from left in central panel; at far left in the same panel, St. Gregory Maurus) as depicted in an earlier fifteenth-century altar of the BVM and saints of Köln (between 1410 and 1430) in the Gemäldegalerie, Berlin: 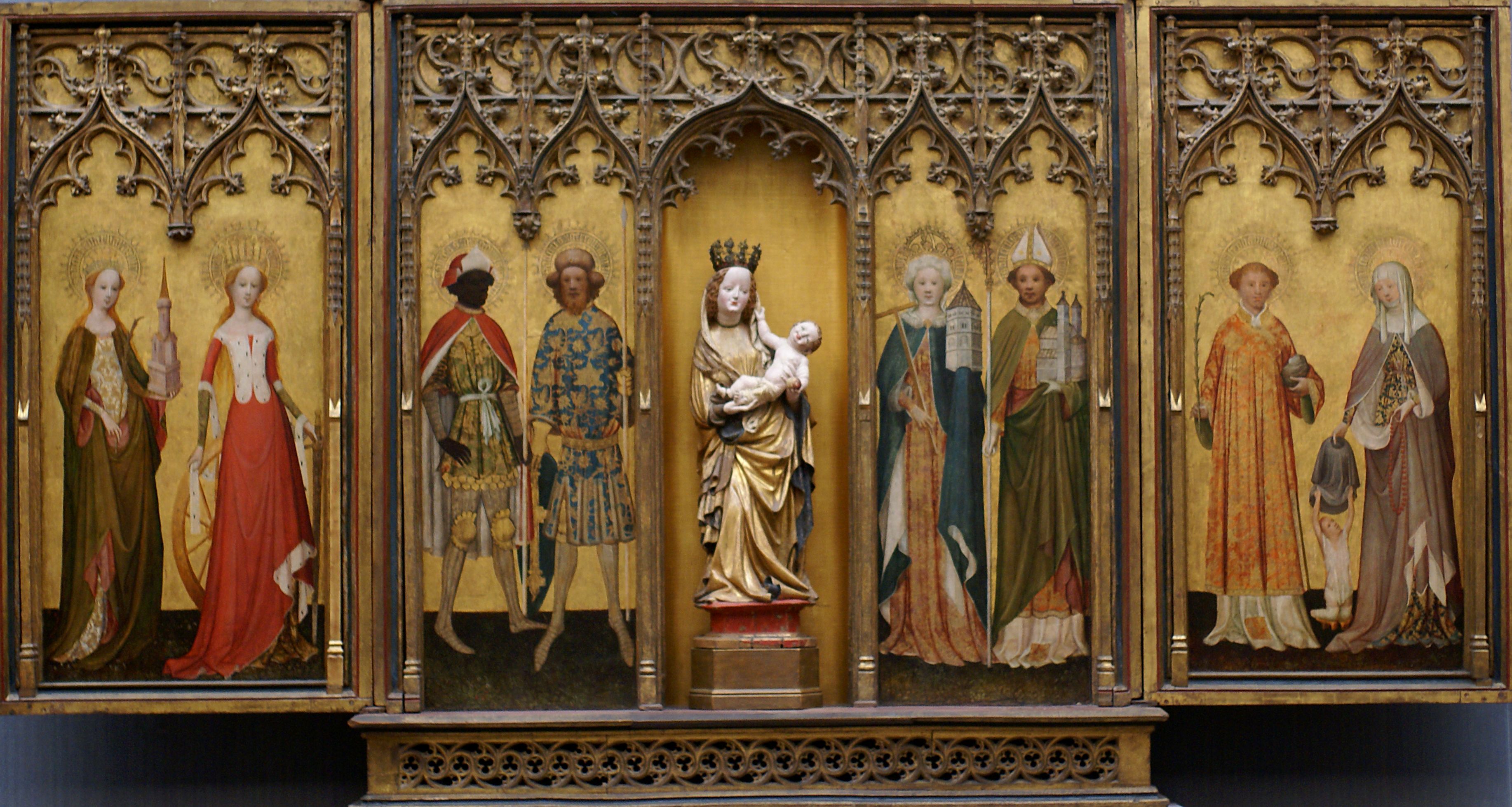 The Clever Boy wonders if the figure of St Gereon is a tribute to king/Emperor Sigismund in that the face and beard are nor dissimilar to images of Sigismund and the hat like that shown in virtually all images of the Luxembourg king and later Emperor.

d) Gereon and companions as depicted by Stefan Lochner in an earlier fifteenth-century panel painting (c. 1440) on his Dreikönigsaltar in the cathedral of Köln: 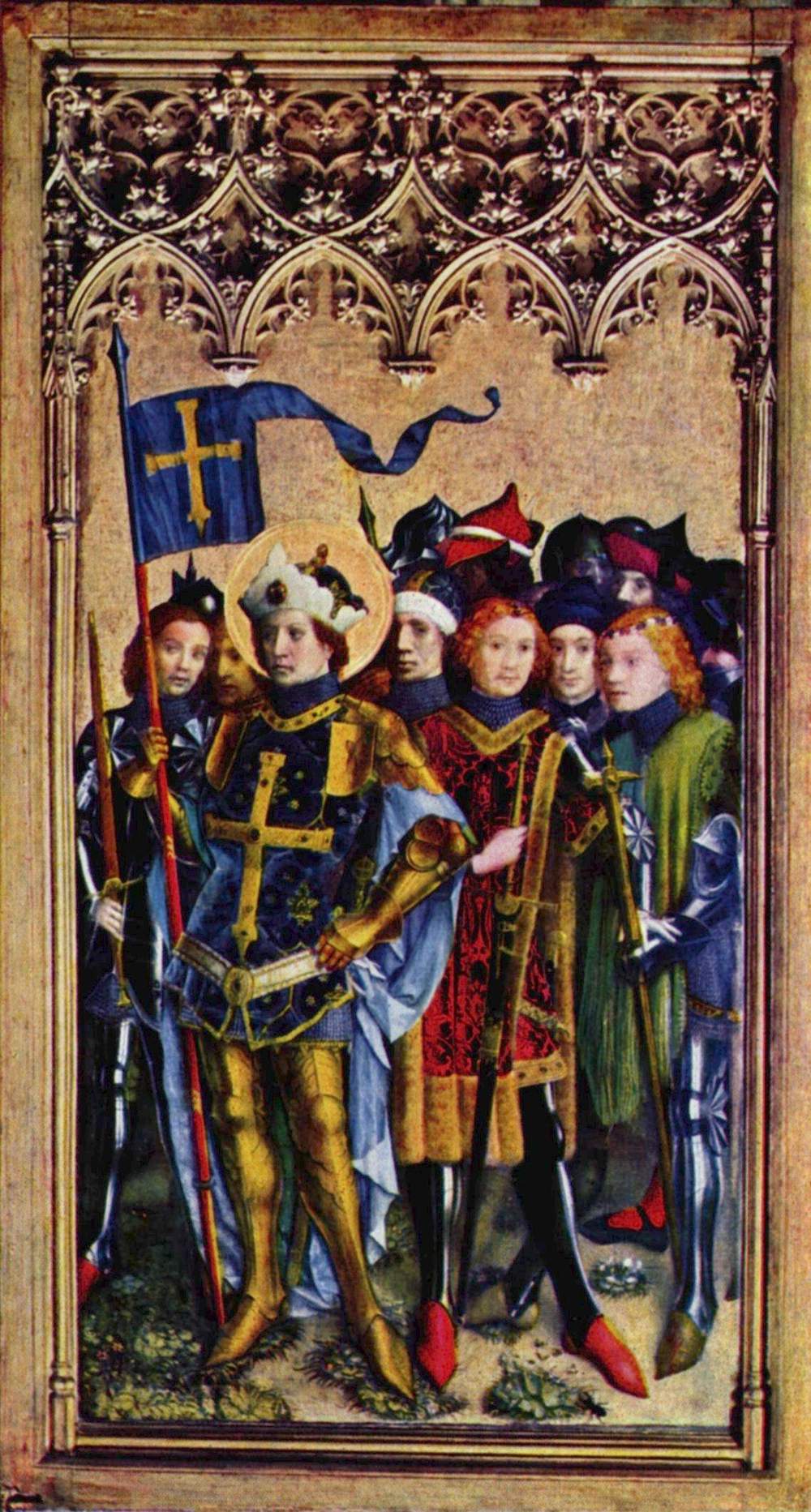 http://tinyurl.com/3jlxqx
The altarpiece as a whole: http://www.wga.hu/art/l/lochner/adorat.jpg
e) Gereon (second from left) and companions as depicted by the Master of the Assumption (Meister der Verherrlichung Mariae) in a later fifteenth-century panel painting (c. 1460) in the Germanisches Nationalmuseum, Nürnberg:
https://www.flickr.com/photos/roelipilami/14931956501/
https://www.flickr.com/photos/roelipilami/14935025195/

f) Gereon as depicted (second from left -- counting Christopher and his charge as one) by the Master of the Assumption (Meister der Verherrlichung Mariae) in a later fifteenth-century panel painting (c. 1480) in the Wallraf-Richartz Museum, Köln: http://www.wga.hu/art/m/master/zunk_ge/zunk_ge2/14anne.jpg
The other figures are St Peter vested as Pope and the Virgin Mary with St Anne and the Christ Child - added by the Clever Boy.

g) Gereon as portrayed (at right; at left St. Ursula; at centre, the martyrdom of St. Barbara) in a wing of an early sixteenth-century pendant (1504) in the form of a silver gilt and enamel triptych in the Museum of Fine Arts, Boston:

h) Gereon as depicted in a panel of the early sixteenth-century Typological Window of the Nativity (Typologisches Geburt Christi-Fenster; c. 1508) in Köln's Hohe Domkirche Sankt Peter und Maria:
1) according to the cathedral's website (German-language) - St Maurice:

https://www.heiligenlexikon.de/Fotos/Mauritius9.jpg
2) according to heligenlexikon.de and to the cathedral's website (English-language) - St Gereon:

https://www.heiligenlexikon.de/Fotos/Gereon9.jpg
Neither site indicates the source for its identifications of the four saints in this register.

i) Gereon as depicted (at right; at left, St. Helena; at centre, St. Maternus of Köln) in an earlier sixteenth-century glass window panel (c. 1520-1530) in the church of St. Maria Lyskirchen in Köln: 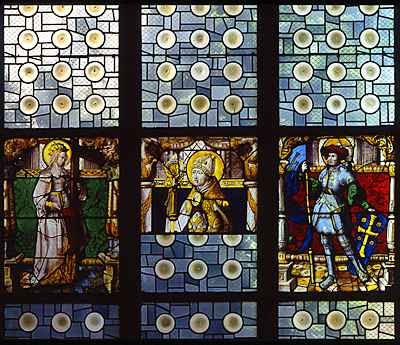 http://www.romanische-kirchen-koeln.de/index.php?id=689
Posted by Once I Was A Clever Boy at 16:54