St Luke painting a portrait of the Virgin


John Dillon has followed up his selection of images of St Luke on the Medieval Religion discussion group with another series of depictions of the Evangelist painting Our Lady. They all appear as a late- medieval theme,and may reflect a changing or developing awareness of the place of the painter in society. Not only are they pleasing in themselves but they are also an insight into how artists worked - or saw themselves as working - in the period.

a) as depicted in an early fifteenth-century Russian icon in the Ikonen-Museum Recklinghausen: d) as depicted in one of the earlier fifteenth-century paintings added to the Malet-Lannoy Hours probably at the time of an early owner's wedding (1430s; Baltimore, The Walters Art Gallery and Museum, Ms. W.281, fol. 17r):
http://tinyurl.com/oyxxxd3

e) as depicted by Rogier van der Weyden in an earlier fifteenth-century panel painting (c. 1435-1470) in the Museum of Fine Arts, Boston: 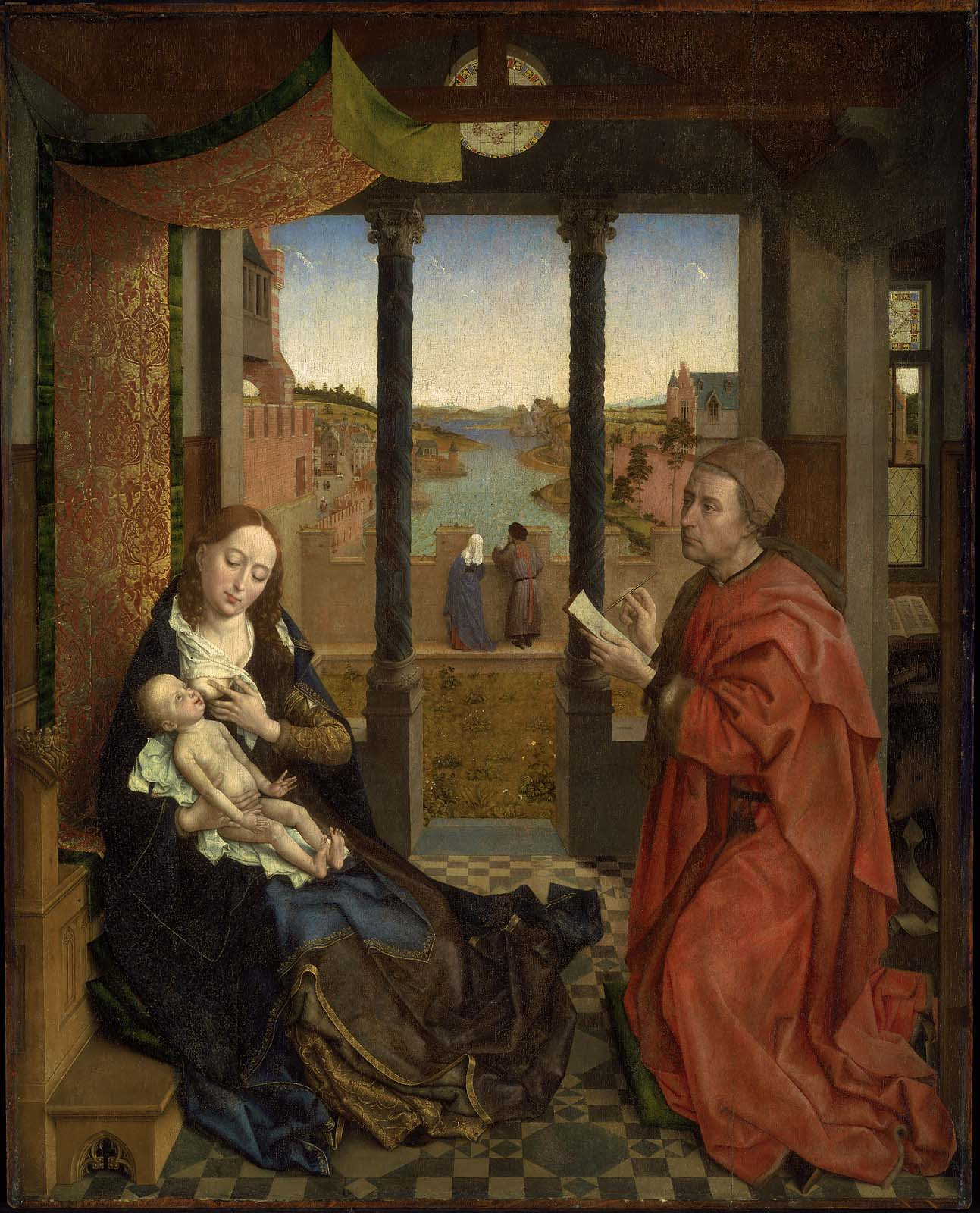 Other versions of this painting exist. Three are shown here:
http://tinyurl.com/6czabs 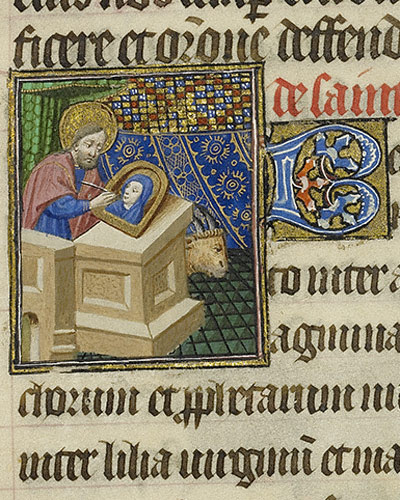 g) as depicted by Dieric Bouts the Elder in a mid- or later fifteenth-century panel painting (c. 1440-1475; transferred to canvas) in Penrhyn Castle, Bangor, North Wales: 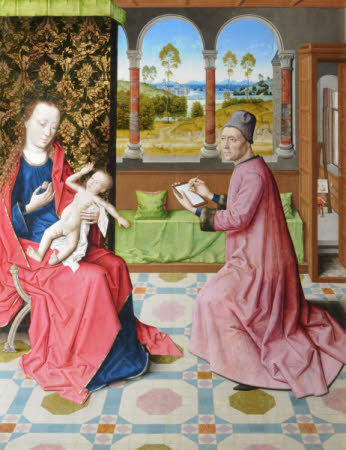 j) as depicted in a later fifteenth-century glass window in the cathédrale Notre-Dame in Évreux (c. 1467-1469; w. 4);
http://tinyurl.com/nvadcjt
Detail view:

k) as depicted in a later fifteenth-century Gospels for the Use of the Parlement de Bourgogne (c. 1470; Besançon, Bibliothèques municipales, ms. 93, fol. 018):
http://www.enluminures.culture.fr/Wave/savimage/enlumine/irht5/IRHT_083574-p.jpg

m) as depicted by Gabriel Mälesskircher in a later fifteenth-century panel painting (1478) in the Museo Thyssen-Bornemisza, Madrid:
http://www.museothyssen.org/en/thyssen/ficha_obra/330

p) as portrayed in two places on the late fifteenth-century Lukasaltar in the Evangelisch-lutherische Hauptkirche St. Jakobi in Hamburg (1499):
1) in a carving in high relief in the central panel of the opened altar (lower register at right; at left, Anna Selbdritt):

2) in a panel painting on an outer wing:

q) as portrayed in high relief by Jacob Beinhart in an early sixteenth-century wood sculpture (1506) in the National Museum in Warsaw: 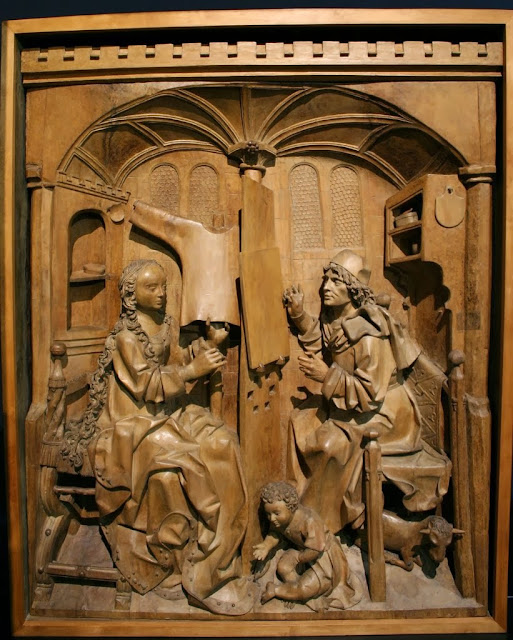 r) as depicted by Niklaus Manuel in an early sixteenth-century panel painting (1515; from a dismembered altar of St. Anne) in the Kustmuseum Bern: 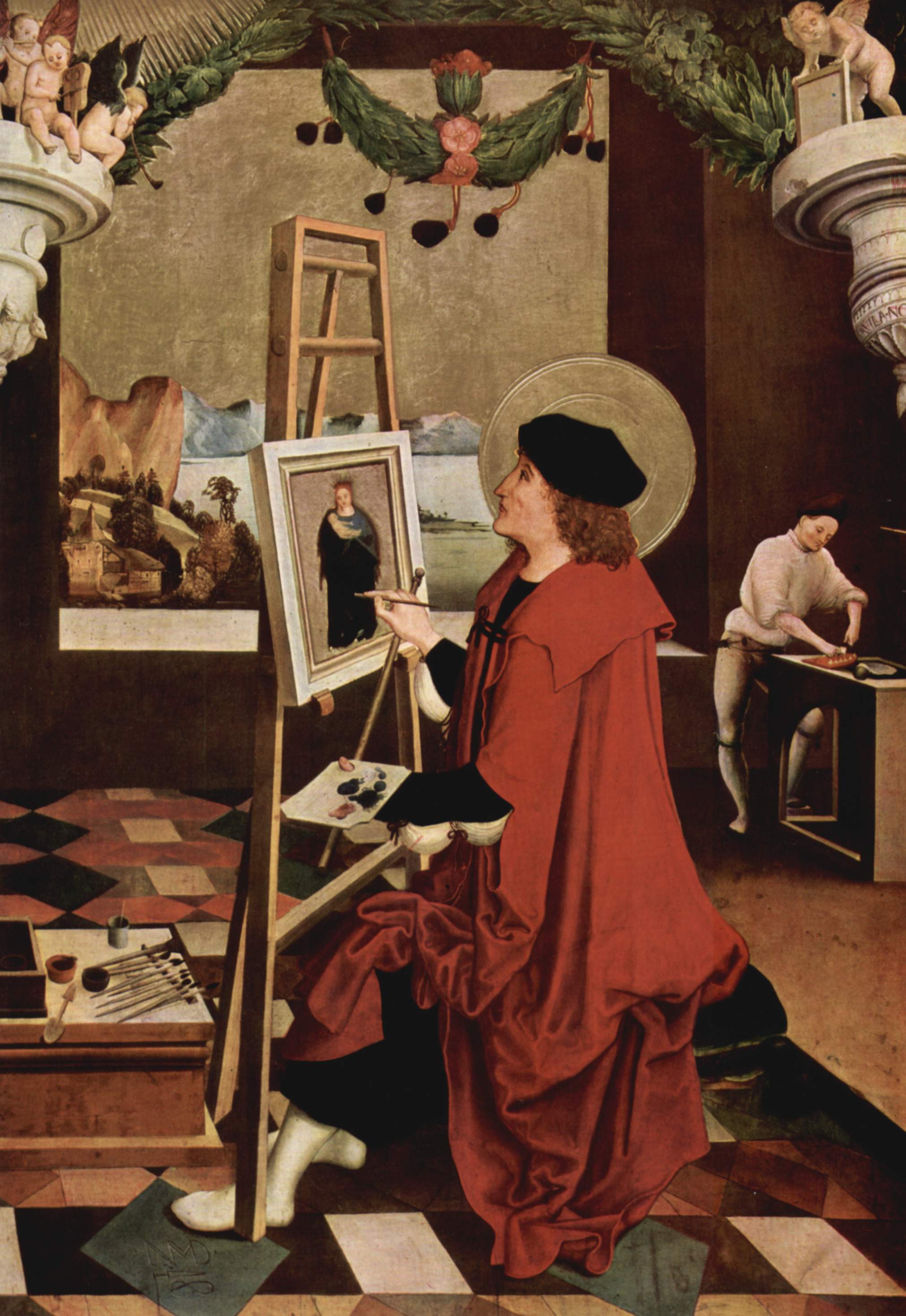 s) as depicted by a follower of Quentin Matsys (Massys, Metsys) in an earlier sixteenth-century panel painting (c. 1520) in the Fogg Art Museum, Harvard University: 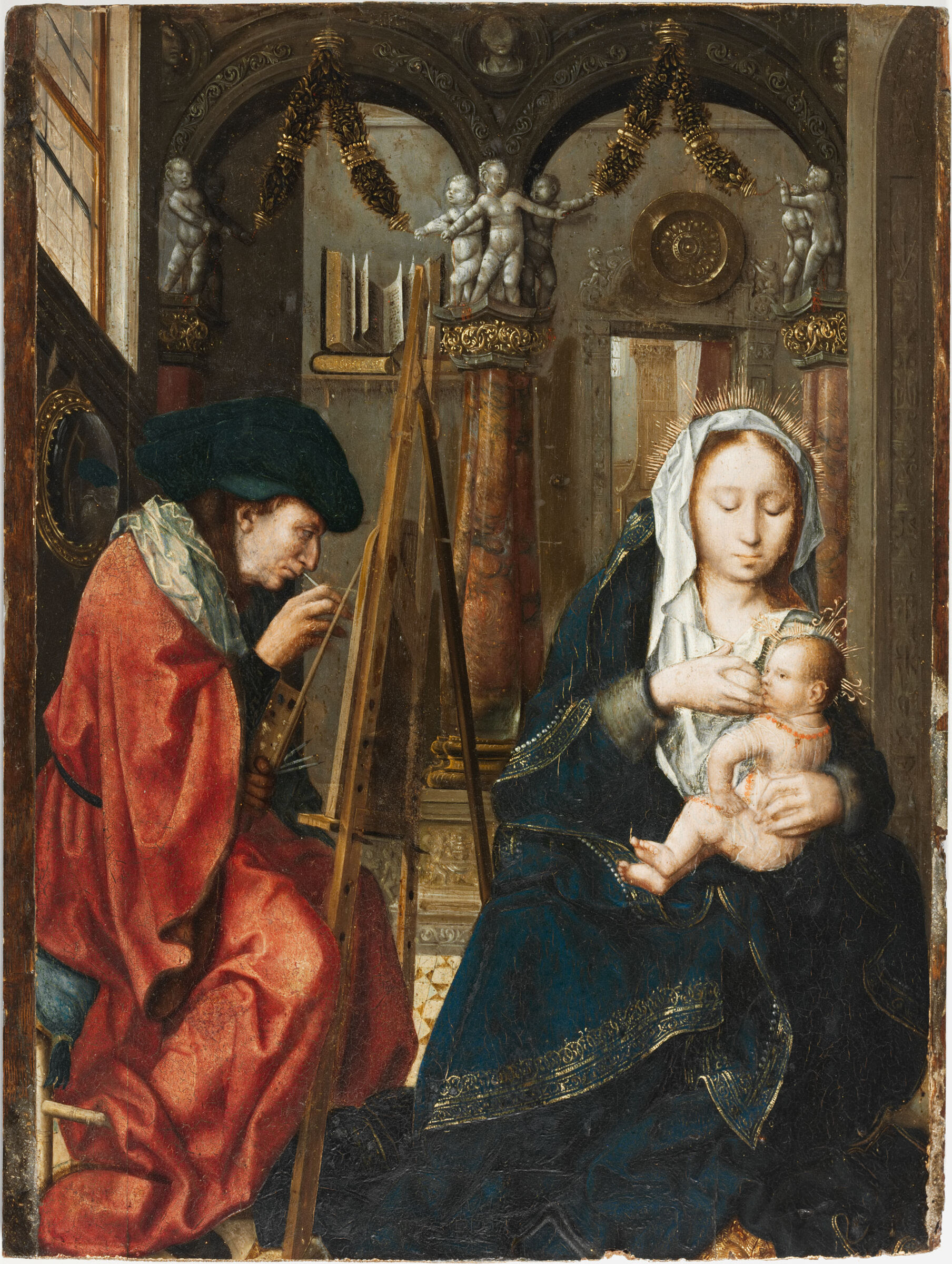 
And a few period-pertinent images of St. Luke displaying a painted portrait of the BVM:

aa) as depicted in a late fifteenth-century book of hours according to the Use of Tours (Tours, Bibliothèque municipale, ms. 2042, fol. 8r):