The skull of King Richard II

February 14th is often given as the approximate date for the death of King Richard II at Pontefract Castle in 1400.

This is based on rather cryptic letters from the Council in London enquiring as to whether the ex-King was still alive or if he was dead, and if he was, that his body should be sent put on display. Assuming that the real Richard had not escaped to Scotland as some claimed his embalmed body was sent to London, displayed at St Pauls and then buried, first at King's Langley and then moved to its original intended burial place in Westminster Abbey by King Henry V.

With all the recent interest in the bones of King Richard III I thought this drawing, made in 1871, of the skull of King Richard II might be of interest. There is more about the drawing here. It was made during restoration work at Westminster when the tomb was opened. One thing this nineteenth century examination showed was that death was not caused by a blow to the back of the head, as in Shakespeares's King Richard II. The fact of their being no known historical figure of Sir Piers Exton, who slays the ex-monarch in the play, has led to historians looking to Sir Peter Buckton as the possible assassin but there remains a range of possibilities as to the nature of King Richard's death. 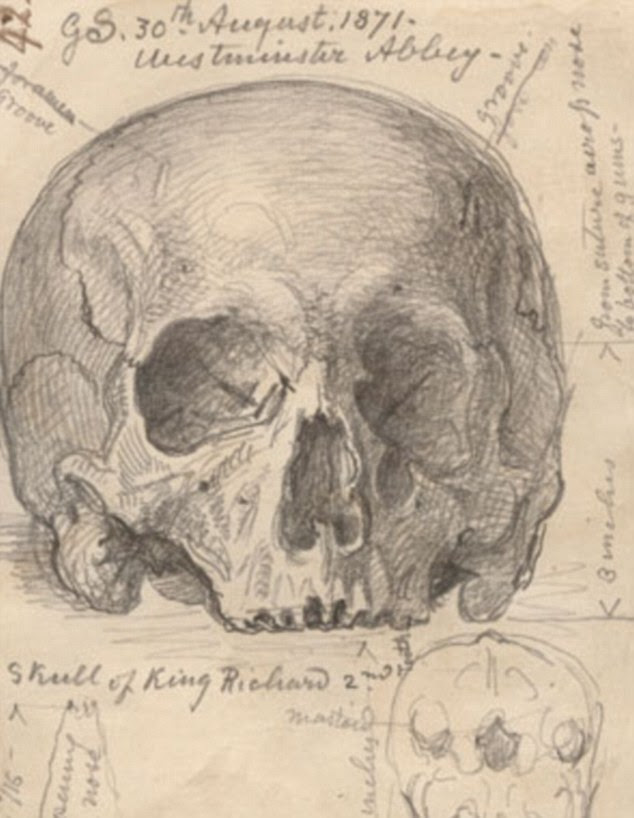