Born Giuliano della Rovere in 1443 he was elevated to the cardinalate by his uncle Pope Sixtus IV and was himself elected to the Papacy late in 1503.

There is an illustrated online life of Pope Julius here and another, from the Catholic Encyclopaedia, here. 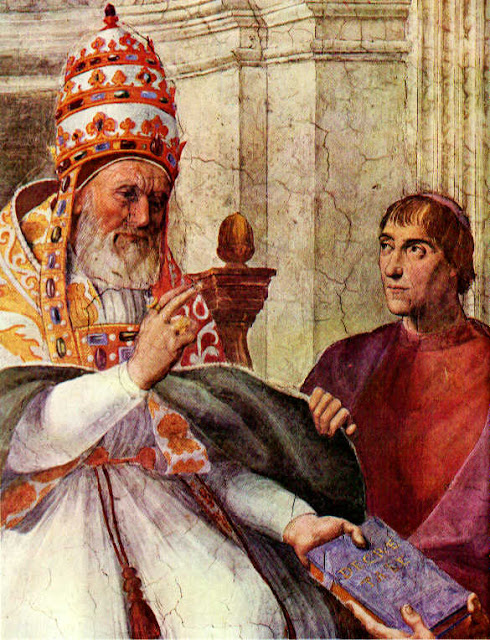 The Pope is depicted as Pope Gregory IX issuing the Decretals.
He is wearing the Papal tiara on top of the camauro.

As Pope he is famous for his military campaigns, which may today seem somewhat unsuitable for the Vicar of Christ, but which were part of the maintenance of the independence of the Papal States - a vital issue for the Popes from the Donations of Pepin and Charlemagne to the Lateran Treaty of 1929 and the creation of the modern sovereign Vatican City state.

His other, and more enduring, legacy for the Holy See and the Church was the rebuilding of St Peter's Basilica, which he began with the laying of the foundation stone in 1506 and, of course, his commission to Michelangelo to paint the ceiling of the Sistine Chapel. Both of these buildings are going to be more than usually in the thoughts of Catholics and the wider world in coming weeks, so it is by no means inappropriate to give thanks for Pope Julius as a patron of truly great and spectacular art.