The King under the car park

Last week I was posting about the King over the water, this week it is the King under the car park.

Yesterday came the announcement of the results of the DNA testing on the skeleton found on the site of the Leicester Greyfrioars and generally assumed to be those of King Richard III which confirmed that the remains are indeed those of the King. There are reports from the BBC here and from the Daily Telegraph here. 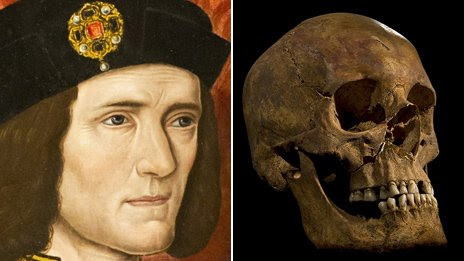 Today there is much more, including this piece, again from the BBC, about the facial reconstruction of the skull which can be read here. This has a whole series of links to other pieces about the King's death and the excavations which revealed his remains.

There is a detailed and very well illustrated account of the remains and of the facial reconstruction on the Daily Mail website which can be seen here.There is also another article, again from the Daily Telegraph, with links to others on the topic, which can be read here.

I too have been following this story and was certain that you would be too. I was going to e-mail you with some questions but thought it might be better to put them on here that others might benefit from our discourse.

First, do you agree with the suggestions of many commentators, that King Richard should now receive a State Funeral? Is this necessary given that he did (I assume) receive an actual funeral at the time of his death, ableit without the usual pomp that accompanies a King's send-off.

If your answer to the above is 'yes' then that raises the question of where he should be interred. Should he be given a place in Westminster Abbey like so many English monarchs, and where he could be reunited with his Queen - Anne Neville, or would somehwere else be appropriate? I have heard it said that the King, during his lifetime, had expressed a desire to be buried in York so wouldn't York Minster be the better choice?