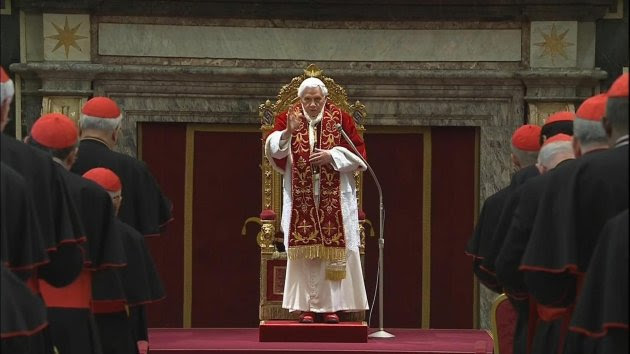 In these last hours of his pontificate I would wish to put on record my gratitude to the Holy Father for his time as Pope, and indeed for all his lifetime of service as pastor, administrator, theologian and writer to the life of the Church. His withdrawal from the public scene is not after just eight years at the centre, but far longer - for over thirty years he has been a leading figure, and ultimately the leading figure, in the administration of the Church. It is not easy to imagine the Church without him. We must trust that his legacy endures.

I shall miss that quiet, calm, authoritative scholarly voice whether when speaking or in his writings which has characterised his pontificate. These one can, and will, still refer to and use - Jesus of Nazareth and the other books based on his addresses are no mean achievement in themselves  in addition to his existing previous books, and produced whilst he had the responsibility of the Papacy.  He possesses  a remarkable clarity and beauty of thought and expression.

He has shown himself to be a  true pastor, a task he has exercised with dignity leavened by quiet humour and gentleness.

To my mind his pontificate may well come to be seen as the steadying hand on the tiller of the barque of the Church, reestablishing a more certain passage through the troubled waters of this world - but for that judgement of history we shall have to wait.

Together with many friends I have been the beneficiary of what he gave in Summorum Pontificum and in Anglicanorum Coetibus - very significant moves indeed in the spheres of liturgy and ecumenical dialogue.

His emphasis on liturgical restoration is one of the most obvious features of his pontificate. This has been clear in the dignity of ceremonial and attire  at Papal Masses and ceremonies since  2005. The dignity of the Papal office has been signified, and venerable practices re-established. I hope very much that continues and is maintained by his successors. These things are not, or should not, be matters of personal preference but rather the indicators of what the Papacy is - in preceding decades it seemed to become prone to too great a dependency on the personality of the individual Pope rather than the inherent authority of the office. The present Pope's personal humility of manner has counterbalanced this with dignity and discretion.

I saw him twice during his memorable visit to this country in 2010 - at Westminster and at the beatification of John Henry Newman in Birmingham -  both of them remarkable things to experience.

Thank you, Holy Father, and God bless you.