In a comment on my post The King under the car park a friend asked me my views as to where the newly identified bones of King Richard III should be buried, and whether, as some want, he should have a state funeral.

Given that his bones have been in Leicester since 1485 it seems reasonable to leave him there, and, as the proposal stands, to bury him in the city's Anglican cathedral. The cathedral already has a modern ledger stone in memory of him, and the Greyfriars site is in the parish. 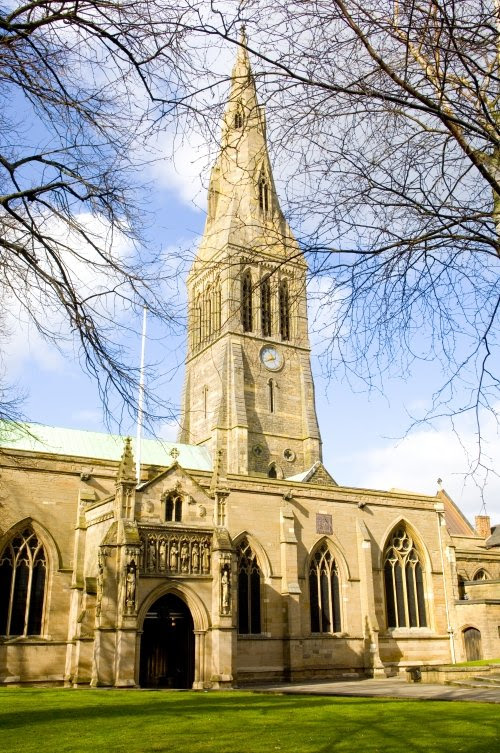 Leicester Cathedral
The building is medieval, but much restored, and the tower and spire date from 1862

I am not sure where the idea that he wanted to be buried at York comes from - I doubt if it is at all accurate. Queen Anne was buried at Westminster, but where King Richard himself thought he might be buried is unclear. Westminster is likely, but both his brother King Edward IV and King Henry VI are at Windsor - though for differing reasons he might not have wanted to be with them. 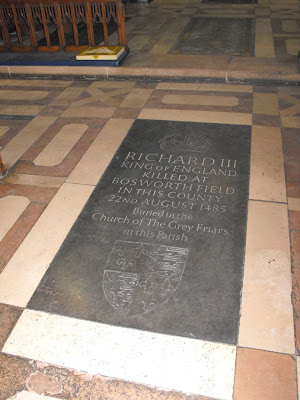 
Whatever was done with his interment in 1485 - he rather looks to have been bundled into his grave - King Richard has had a funeral already.

A State Funeral has, I gather been ruled out by the Queen, and to hold such an event would, frankly smack of  a stunt, though some peopel writing in the press, such as Andrew Roberts, appear to favour such a thing. As others have pointed out there remain unresolved issues as to how King Richard came to the Crown, and of various of his actions in respect of relatives, erstwhile friends and opponants. You do not have to go from not doubting the version of his career presented by Shakespeare in a play a century later than the King's death to believe the more extravagant claims of his modern partisans, who manage, at times, to present him as a virtual candidate for canonisation.

The proposed form of service at the reburial in the cathedral next year is an ecumenical one. Now this does raise issues. Ecumenism was not a big issue for King Richard III or his contemporaries. Leicester cathedral is part of the established national church, but Richard was a Catholic - and he would expect Catholic Rites. Given Leicester's Lollard tradition in the preceding century he might have been very cool towards "ecumenical" services with their successors.

Given that the cathedral is part of the national body established by his great-nephew in the 1530s I imagine some sort of compromise liturgy is inevitable. The unknown sailor from the Mary Rose received a Sarum Requiem in the Anglican cathedral in Portsmoth, but in 1545 the country was not in communion with Rome.  A deceased fifteenth century King does deserve the liturgies and practices he would have known. That would mean a Requiem - and as Desmond Seward points out in his book  Richard III; England's Black Legend, this was a man with a strong penchent for establishing requiems for the departed, including those for whom he might well be held accountable for their deaths.

Despite what Cranmer says in the BCP there does not appear, acording to the latest thinking, to have been a seperate Lincoln Use, but rather a local varient on Sarum in the diocese in which both Bosworth and Leicester lay. So a Sarum Requiem celebrated by a Catholic seems to be called for, or at least a modern OF or EF Requiem. I have heard that Bishop Macmahon of Nottingham has expressed his willingness to celebrate a Requiem for King Richard III. As the Bishop is a Dominican maybe a traditional Requiem in the Dominican Rite would be suitable.

On a different point, it is noteworthy how much interest has been raised by the discovery of the King's skeleton. That must be good for encouraging awareness of the fifteenth century in the wider public.