It was not until late afternoon yesterday that I learned of the Pope's announcement of his intention to abdicate as of the evening of February 28th. His announcement appears to have caught virtually everyone by surprise, though I recall that he had said in an interview with Peter Seewald that he would consider abdication if he thought he was no longer physically able to exercise the Papal office as he thought it should be done. He has been a Pope of surprises, and in this final announcement has continued that way of operating. 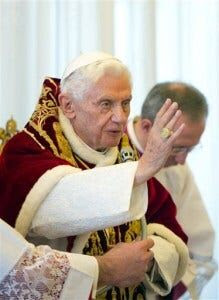 The Pope gives his benediction after his announcement

This is clearly the Holy Father's free personal choice, after prayer and reflection, as he said. It should be accepted with respect, and without the wilder theories that will doubtless go the rounds of the internet. He clearly wishes not only to avoid personal distress through infirmity, but to spare the Church another period of leadership by an ailing Pope. That is something he himself will well understand from the latter years of Pope John Paul II. From yesterday's pictures he appears more aged than hitherto, though the emotion of the choice and occasion must have taken its toll.

I am saddened by this news for two reasons. Firstly I am very sorry that someone for whom I have enormous, boundless, respect and admiration considers that they are too frail to continue in office. I have real human sympathy for the Pope, and wish him well in his retirement, the chance to relax and to spend time with his brother, and with God in prayer.

Secondly I am sorry that he will not continue to lead the Church along the lines he has led it since his election - despite his age I looked forward to new initiatives and genuine renovation coming from him.

I also feel great gratitude for all that the Pope has achieved in his pontificate and all that he has given to the life of the Church over so many years. This will be, I am sure, an enduring legacy of writings, formation, liturgical renewal - not just Summorum Pontificum but the new English translation and a real concern for the dignity and tradition of worship in and around the Papacy itself - the initiation and establishment of the Ordinariates, and the intellectual confrontation with secularism.

As someone who was received into full peace and communion two days before Pope John Paul II died I have been so far,  ipso facto, a Pope Benedict XVI Catholic, and consider myself very fortunate indeed to have had him as the visible head of the Church as I have grown into its life and practice.

The precedents for Papal abdication are few. He will apparently return to the status of being a Cardinal again, as did Popes Gregory XII and Pope John XXIII in the early fifteenth century. Will a life of cloistered prayer within the Vatican be possible for him without having the real opportunity to publish or speak again for fear of it being seen as a criticism of his successor? Will he be left in peace to do what he wishes?

Pope benedict XVI in 2009 visiting the reliquary of Pope Celestine V - St Peter of Morrone - who abdicated in 1294, the last Pope of an undivided Western Church to abdicate.

As loyal Catholics we must continue to pray for the Pope, and for the Cardinals who will elect his successor, for that successor and for the Church.

Certainly one of the better posts on this subject to have appeared in the blogosphere, and such wonderful photographs.