Earlier today I went on the Latin Mass Society's Pilgrimage to the Shrine of Our Lady of Caversham.  I am very fond of this beautiful shrine, and there is an article from the local historical journal Oxoniensia about its history in the middle ages by Christopher Haigh and David Loades which can be viewed here.

Our Lady of Caversham
The present statue is late medieval Flemish, with a crown blessed by Pope John Paul II in 1996

Image: ourladyandstanne.org.uk
The present shrine chapel was added in 1958 in an extraordinarily skillful design to the church of Our Lady and St Anne, which itself dates from 1896. The new chapel really does feel as though it were twelfth century - although I imagine if it were it would have been more colourful with wall paintings in the style of the period. It is both splendid and restrained - noble simplicity perhaps? The screen in particular reminds me of the decoration of the King Edward I chantry in the Anglican Shrine at Walsingham. There is more about the church and shrine at the parish website which can be viewed here. If you get the chance to go to the shrine at Caversham do go, it is quite delightful. 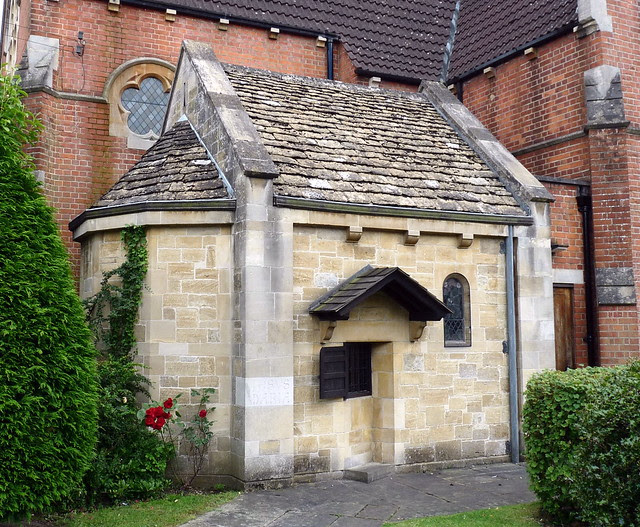 The exterior of the Shrine chapel

Image:karenblakeman on Flickr
It was also my first opportunity to attend the Extraordinary Form Mass for this Ember Saturday. I had been asked to act as thurifer, so it was a fairly early start to get the bus with a friend from outside Christ Church and travel on a cold day with snow flakes blowing in the wind down to Caversham. We arrived in good time and were able to join a good number of parishioners in Eucharistic Adoration before setting up for the Mass. This was a beautiful liturgy with its distinctive sequence of Old Testament prophetic readings, each of them sung by members of the schola in front of the altar. In his sermon the celebrant, Fr Daniel Lloyd, drew out the harvest imagery in respect of the tradition of holding ordinations at the Ember Days as a sign of the fruitfulness of the Church in producing vocations to ministry and the fruits of Grace. I must admit that my rheumatics were playing up rather as I genuflected (or attempted to) at the usual places as well as the repeated Flectamus genua during the prophecies - I must remember to dose myself more heavily with anti-inflamatories next time...The music was provided by the Scholas Abelis from the Latin Mass Society and by the Newman Consort, and we concluded by singing the Ave Regina Caelorum at the Shrine. Afterwards there was the usual lighting of individual candles there and pilgrims seeking the intercession of Our Lady of Caversham as they have for centuries in the vicinity - the original shrine was in a chapel upwards of amile to the east. I think that the site has now been quarried away for gravel.

I came back with the MC and the other friend I had travelled with by car, stopping in Wallingford for a late lunch, and made a mental note to myself to go back when the weather is less cold and explore further this very historic Thameside town - what I have seen of it on a previous visit makes me realise its interest. The site of what once was a very impressive castle, virtually all of it reduced to earthworks, and the similar remains of the town defences indicate how important it once was. After that we came back to Oxford and went to join the Pro-Life Witness I posted about earlier in the week. Having now come back to the city centre I am starting this post before going off to the Ordinariate Mass to round off a cold but eminently Catholic day. Update: The Chairman of the Latin Mass Society has very kindly send me the link to his set of photographs of the Mass at Caversham - they can be viewed here  and if clicked upon will enlarge. I hesitate to point out that I feature in several of the photographs, but don't mind me, appreciate the liturgy.

It is in the 1981 volume. There is another article in a later volume - not sure which at the moment - which deals with the site of the shrine. It apparently lay east of the village on a site now largely quarried away for gravel if I recall the details. I will try to find the reference and post it.