Today is the 535th anniversary of the execution at the age of twenty eight in the Tower of London of George Duke of Clarence following his conviction for treason in a court presided over by his brother King Edward IV. Such appears to have been the stage management of this trial that it was deemed necessary to destroy the official record of it, and we are dependent upon reports from the Croyland chronicler for what we know of it. The Duke was buried with his wife, who had died in 1476, at Tewkesbury abbey. Clarence's downfall may well be seen as the begining of the implosion of the House of York that culminated in Bosworth and the destruction of the family.

Michael Hicks, who has written a typically balanced and well researched biography of the Duke in False Fleeting Perjur'd: George Duke of  Clarence 1449-1478, also wrote the Oxford DNB life of Duke George which can be read here.There is another online life of Clarence here which contains other biographical links. There is an online piece about the Duke's downfall, written from a Ricardian standpoint, here, which contains additional interesting information. 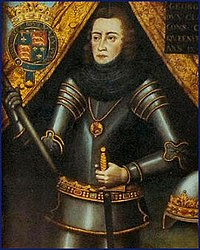 A detail from a late sixteenth or early seventeenth century painting from a series of the Constables of Queenborough Castle in Kent. It may derive from a lost contemporary portrait of the Duke.

The story of Clarence being drowned in a butt of malmsey is nearly contemporary with his death, and his daughter, Bl.Margaret Pole, wore a small barrel on a bracelet, presumably as a reminder of her father's fate. The best explanation I have seen is that he was drowned in a bath tub made out of a vat which had held malmsey - perhaps King Edward recoiled from literally spilling his brother's blood, and opted for drowning as a means of execution.

The Duchy of Clarence is one of the oldest royal Dukedoms, first bestowed in 1362, and deriving its name from the lands of the Clare inheritance - a point brought out at the town of Clare in Suffolk. It is not a particularly auspicious title - of the five Dukes none has left a male heir who has been able to inherit the title.