The Temptation of Christ


I was particularly struck by the second reading in today's Office of Readings - it provides considerable food for thought, an ideal piece to reflect upon in doing lectio divina, and so I thought I would post it for others to reflect upon if they are so inclined. 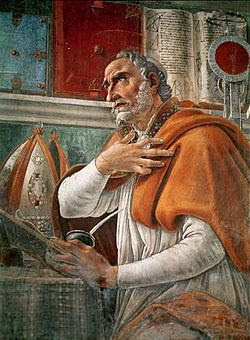 St Augustine
Sandro Botticelli, 1480
Image: wikipedia
The lection is taken from a commentary on the psalms by Saint Augustine of Hippo, and is about Ps 60, vv2,3:

Why did I make this cry? While my heart was in anguish. The speaker shows that he is present among all the nations of the earth in a condition, not of exalted glory but of severe trial.

Our pilgrimage on earth cannot be exempt from trial. We progress by means of trial. No one knows himself except through trial, or receives a crown except after victory, or strives except against an enemy or temptations.

The one who cries from the ends of the earth is in anguish, but is not left on his own. Christ chose to foreshadow us, who are his body, by means of his body, in which he has died, risen and ascended into heaven, so that the members of his body may hope to follow where their head has gone before.

If in Christ we have been tempted, in him we overcome the devil. Do you think only of Christ’s temptations and fail to think of his victory? See yourself as tempted in him, and see yourself as victorious in him. He could have kept the devil from himself; but if he were not tempted he could not teach you how to triumph over temptation.
Note: I have copied the text from the Universalis website, and I have the impression that this is a slightly shortened version from that contained in the printed Divine Office, but I may be wrong on that point.