An early morning meeting at Christ Church last Friday took me on a slightly different route into the centre of Oxford and through the site of the medieval Oxford Greyfriars.

The buildings had been largely demolished by the time Ralph Agas drew his pictorial map of the city in 1578, but excavations in 1971 and 1972 revealed the plan of the church and some of the conventual buildings - the foundations had been largely robbed out. The church had a very unusual extended north transept to accommodate more altars, and was cut into the city wall. Part of the site of the choir is still visible as a grass plot in Old Greyfriars Street, whilst the multi-storey car to the south covers the site of the domestic ranges.

The founding Prior, Bl. Agnellus of Pisa, is buried there. The house, along with the whole Franciscan mission in England, attracted the support of the diocesan bishop, Robert Grosseteste, who held the see of Lincoln from 1235 until his death in 1253. The Oxford friary had his library and relics such as his sanctuary slippers until the dissolution. I strongly suspect that "my bishop" Richard Fleming used the library in his own time as a student and Regent Master in Oxford. Grosseteste's close friend Adam Marsh was trained and lectured at the friary. 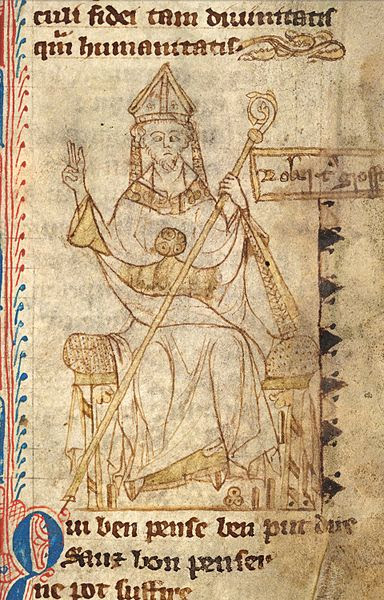 Image: Wikipedia
Other notable Franciscan s who lived and studied there were Roger Bacon, who is now commemorated by a plaque on the wall adjacent to the site of the choir and by the nearby Roger Bacon Lane, John Duns Scotus, William of Ockham and Peter Phillages, who from 1409-10 reigned as the conciliar Pope Alexander V. 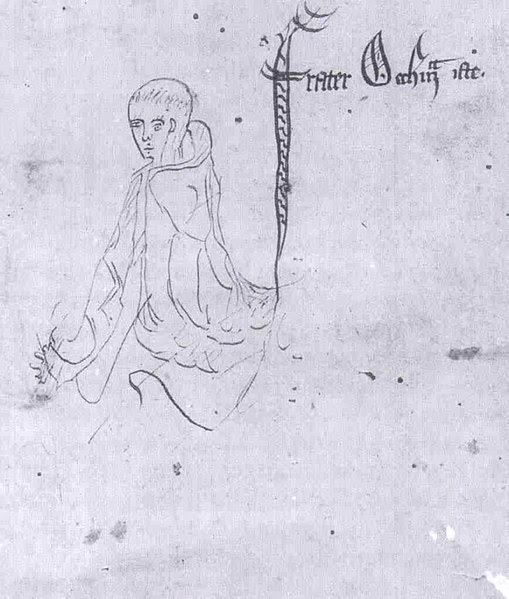 The sketch is labelled "frater Occham iste", from a manuscript of Ockham's Summa Logicae, 1341.

I understand that just as Ockham's former home in Oxford is now covered by a supermarket car park, so to is his presumed grave in Munich. 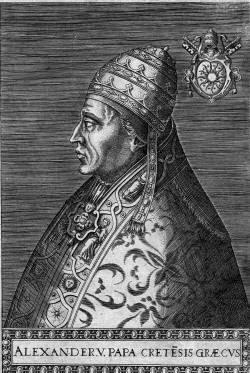 The church was also the site of the burial of the heart of Richard of Cornwall, the younger brother of King Henry III and the elected (on a split vote of the Seven Imperial Electors) King of the Romans from 1257 until his death in 1272. With his death and the abdication of his claim by his rival, King Alfonso X of Castille, the way opened up for the election of Emperor Rudolph I, the first Habsburg ruler of Germany. King Richard's body was buried with that of his second wife, Sanchia of Provence, at Hailes Abbey in Gloucestershire which he had founded and had given to it the great relic of the Holy Blood, but his heart went to the Franciscans in Oxford. Five years later, in 1277, his third wife, Queen Beatrix of Falkenburg, was buried in the Oxford friary.

There is an illustrated website about Richard of Cornwall here, and there are biographies by N.Denholm-Young Richard of Cornwall and by T.W.E. Roche The King of Almayne, which includes a photograph of a stained glass panel depicting Queen Beatrix, which does not appear to be available on the internet.

And all that within a few yards of Oxford city centre.