Today is the commemoration of one of the great figures of the tenth century English church, St Oswald, Benedictine monk, Bishop of Worcester, who in his later years held in addition the Archbishopric of York, and the founder of the great Benedictine abbey at Ramsey in Huntingdonshire as well as the cathedral priory at Worcester, who died 1020 years ago on February 29 992.

The biography of him by N. P. Brooks in the Oxford DNB can be read here and there is another, illustrated, account of his life here.

His main cult centres were at Worcester where his shrine and that of St Wul(f) stan flanked the high altar in the middle ages and at Ramsey. At York he was perhpas less venerated than other episcopal saints of the see, but he is depicted in the early fourteenth century glass of the great west window of the Minster: 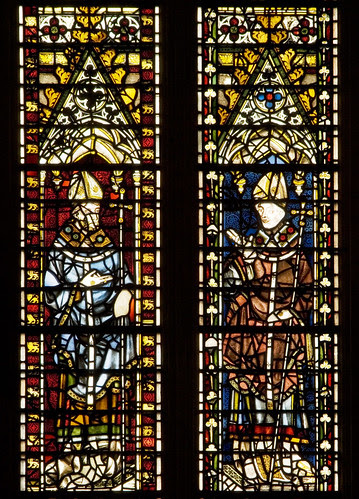