It was on the night of February 20th - 21st 1437, 575 years ago, that a band of assassins entered Blackfriars, the Dominican friary in Perth and murdered King James I of Scots. The reasons appear to be partly dynastic but also a reaction to his tough centralising policies. The story of that night is enlivened with bizarre details - the Queen's lady-in-waiting thrusting her arm through the staples of the door to try to prevent the murderers entering the royal apartment and of the King tearing up the flooring seeking to escape through a drain beneath - only to find that it had been blocked off the day beforehand on his own orders tp prevent his tennis balls disappearing into it. There the fatal blows were struck by Sir Robert Graham, grandson of the King's uncle Walter Earl of Atholl, the leader of the conspiracy.
Following the murder the King's body was buried on February 21st in the Charterhouse at Perth - the House of the Valley of Virtue - he had founded in Perth. Prompt action by his widow, the English born Beaufort Queen Joan, who had been injured in the assault, secured the safety and succession of their son King James II, and Graham, Atholl, and the other conspirators, were executed later that year in ways unusually gruesome and prolonged even by fifteenth century standards.
The move of the government to Edinburgh after 1437 meant that Perth lost its position as the de facto capital of Scotland. With King James I the Stewart monarchs had begun in earnest that process, fraught and difficult was it was to prove that led to the extension and consolidation of their authority over the realm and which would eventually lead King James VI to the English throne as King James I.

The Oxford DNB life of James I by M.H.Brown can be read here , and has a useful discussion of the various interpretations of the reign. There is another online account here. The modern comprehensive life James I by Michael Brown, published in 1994, is very well worth reading and argues that as King James modelled himself on King Henry V, whose successful brand of energetic and authoritative kingship he had witnessed as a detainee in English hands between 1406 and 1424. The ODNB biography of Queen Joan, also by M.H. Brown, can be read here and there is another online account of her life here.
There appears to be no good surviving contemporary portrait of the King other than standard images on his coins, and the usual image we have is from a series of seventeenth century historical portraits of Scottish monarchs. It may derive from a lost original, but I would wonder if he wore a beard when they were certainly no longer the fashion amongst men of his generation and status, or whether he would have worn his hair as long as in this picture. Contemporary descriptions suggest King James was a short energetic man, a keen jouster, archer and wrestler as well as tennis player who was increasingly running to fat as the years progressed. 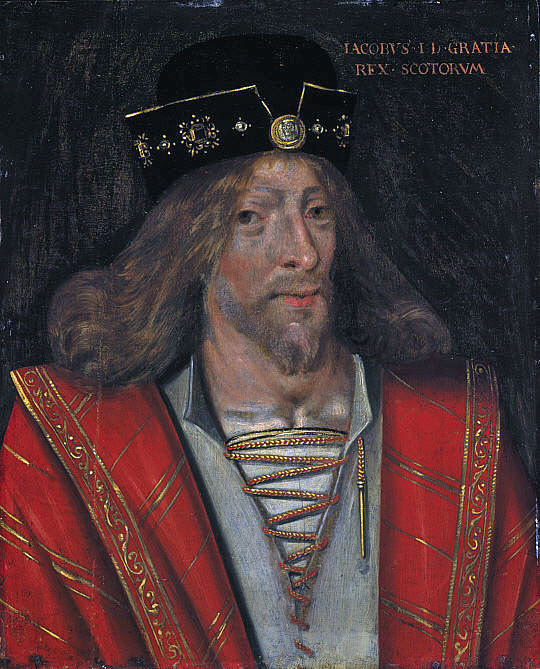 King James I of Scots

It is claimed in older accounts that after the destruction of the Charterhouse the graveslab of the King and Queen was moved to the parish church of St John - but I have not found a modern reference to its presence there today. It may be that the partition of the building into several separate churches, which continued until the 1920s, was not conducive to it survival. Some years ago it appears that some excavations took place on the site of the Charterhouse, which was also the burial place of Queen Margaret the widow of King James IV and daughter of King Henry VII.

I have a research connection to the life of King James - part of his captivity as a teenager and young man in England was spent at Pontefract or in its neighbourhood and he was at those times partly in the care of Robert Waterton, the brother-in-law of Bishop Richard Fleming.
Posted by Once I Was A Clever Boy at 10:04

Wasn't King James I a homosexual?

No evidence for that - he had quite a large family (if that is an indicator). King James VI and I, who also had a sizeable family and seems to have been happily married to Queen Anne of Denmark, may well have had same-sex inclinations. In any case the notion of the exclusively "homosexual" appears to be a late nineteenth century construct - in previous centuries certainly there were people with sane-sex attracyion and practice, but a considerable number of people may well have, shall we say, experimented - the modern self- definition appears less precise. The mral teaching of the Church and society was, of course, consistent in its attitude to pre- or extra-marital physical relations.