Thanks to Yahoo News and the Doncaster Free Press here is a curious bit of history that is something of a non-story in my view, but still quite entertaining in its own way. Doncaster, my father's home town, and very much a Yorkshire town, may be, it seems, actually in Scotland...

Purged of contemporary local journalese the story is as follows:

Doncaster local historians Peter Robinson and Charles Kelham have unearthed evidence that Doncaster was under Scottish rule for 21 years from 1136 to 1157. But while the town was officially signed over between the kings of England and Scotland, it seems it was never formally handed back.

Tourism manager Colin Joy said: “I love it - it is so quirky and has amused and intrigued everyone I have mentioned it to. What really intrigued me was that a formal handing back seems to be lacking.”

The pair found that during the reign of King Stephen of England, King David I of Scotland, of whom there is an online biography here, conquered parts of northern England.

A peace treaty - The Treaty of Durham - was concluded in 1136 and, as well as the county of Northumberland, Doncaster - but nowhere else in Yorkshire - was handed over to Scotland.

A second treaty three years later confirmed Scottish ownership, but in 1157, King Henry II of England simply took back the areas lost to the Scots - but without any official paperwork to seal the deal. 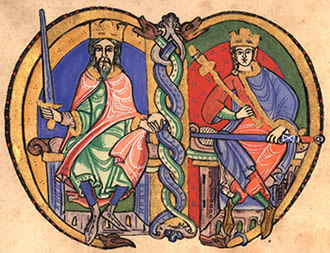 Peter Robinson, the Doncaster Museum officer, said : “We have King David coins dating from that time found in Doncaster so the links are certainly there. But it is unlikely Doncaster would have been noticably affected under Scottish rule.” 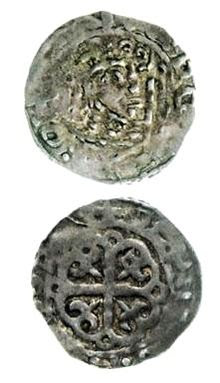 ‎Silver penny of King David I

Image: Wikipedia
To this I would add that I suspect Doncaster was given over as a staging post for King David on his journeys into England - his son held the Earldom of Huntingdon - and King David was the local lord rather than exercising sovereignty. Of course had his grandson not lost whatever possession he had in 1157 Doncaster might have been a potential source of continuing conflict, but it is difficult to see it surviving as a separate entity for long given the inherent power of the English monarchy.

For the young King Henry II it was no doubt a matter of taking back waht had been ceded by his less capable predecessor in the stress of civil war. The fact that the new King waited until King David I was dead may reflect gratitude for the Scottish king's support of Henry's mother, his neice, and who indeed had knighted Henry as a teeneager, in the conflict with King Stephen. Equally it may mean that this was just the first opportunity to get the border back to where it had been under King Henry I in 1135.

Of course Doncaster might have ended up with a history like Berwick on Tweed, which of course is on the border between the two realms, and which is sometimes claimed, due to its anomalous status still to be at war with Russa from the Crimean War...

It is perhaps worth pointing out that in more recent times many Scots came down to Doncaster to work in the mining industry. They mainly settled in Bentley, which is a small town bordering Doncaster and a town that is within the metropolitan borough of Doncaster. The people there still look Scottish and different to people of Conisborough, for example, who are more so the blond haired blue eyed Scandinavian type who migrated from the Durham mining areas.