The Adoration of the Lamb


Paul Chandler O.Carm. sent a post to the Medieval Religion discussion group drawing attention to a new website about the Ghent altarpiece painted by Hubert and Jan van Eyck. The Ghent Altarpiece on display 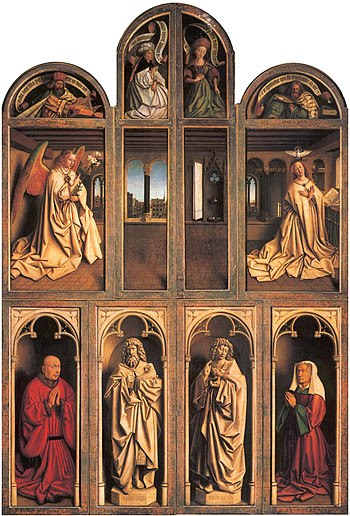 The altarpiece with the wings closed

This new website on the Ghent Altarpiece is truly astonishing: ttp://closertovaneyck.kikirpa.be/

"It is now possible to zoom into the intricate, breathtaking details of one of the most important works of art from the medieval world, thanks to a newly completed website focused on the Ghent Altarpiece.

A stunning and highly complex painting composed of separate oak panels, The Mystic Lamb of 1432 by Hubert and Jan van Eyck, known as the Ghent Altarpiece, recently underwent much-needed emergency conservation within the Villa Chapel in St. Bavo Cathedral in Ghent. As part of this work, the altarpiece was removed from its glass enclosure and temporarily dismantled—a rare event which also made it possible to undertake a comprehensive examination and documentation, supported by the Getty Foundation in Los Angeles.

Each centimetre of the altarpiece was scrutinized and professionally photographed at extremely high resolution in both regular and infrared light. The photographs were then digitally “stitched” together to create highly detailed images which allow for study of the painting at unprecedented microscopic levels. The website itself contains 100 billion pixels."

There is a complete illustrated online catalogue of Jan van Eyck's work here.