Coronation of Emperor Otto I in 962


Today, Candlemas, is the 1050th anniversary of the coronation in St Peter's in Rome of the Emperor Otto I (d.973) as Roman Emperor by the apparently spectacularly unsuitable Pope John XII (955-964).

The Imperial dignity had not been held since 924, and, as in 800 with the coronation of Charlemagne, it was a means whereby the Pope secured help from beyond the Alps in return for the bestowal of the Imperial title and status. This came ten days later with the concession of the Diploma Ottonianum which was a guarantee for the Papacy and mutual recognition of rights and claims.

The coronation effected the Translatio imperii to the German monarchs following on from that to the Franks in 800. As such, in all its variant forms, it was to remains in place until 1806, and continued thereafter as part of the cultural and constitutional inheritance of the Austrian Empire, and, after 1871, of the new German empire, as well as inviting the emulation of Peter the Great of Russia from the early eighteenth century. There is an introductory article on the history of what became from 1157 to be known as the Holy Roman Empire here.

One link with the Emperor Otto I is the Imperial Crown, now in Vienna. The crown is generally thought to have been made for him, perhaps at the abbey of Reichenau, and originally to have consisted of the eight linked panels. To this a pectoral cross belonging to the Emperor St Henry II who died in 1024 was added presumably at the same time as the arch which bears the name of the Emperor Conrad II 1027-39 . This separated the horns of the mitre worn under the crown, but not used at coronations from the seventeenth century, although it survived in the crown made for Emperor Rudolph II which later became the Imperial Crown of Austria after 1806. The front panel with its twelve stones derives from the breast plate of the High Priest of the Mosaic dispensation.

There is an illustrated and informative article about the crown here.

The Imperial Crown of the Holy Roman Empire

Image: farm4.staticflickr.com
The last person to wear the crown was the Emperor Francis II at his coronation in 1792 and who died, as the Emperor Francis I of Austria in 1835. His last illness distressed his five year old grandson who himself died as Emperor Francis Joseph in 1916, and who was photographed with and whose funeral was attended by the Archduke Otto who died last year. Thus are the generations linked. 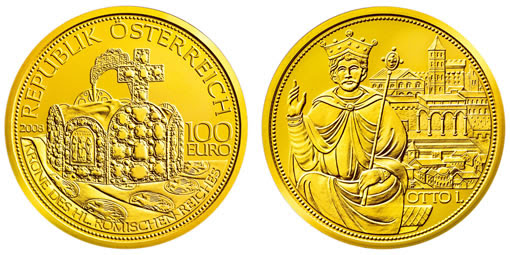 A modern Austrian coin depicting the Imperial Crown and the Emperor Otto from a manuscript of c.1200 seated in front of Old St Peters