One of the regular contributors to the Medieval Religion discussion group is the Rev. Gordon Plumb, who provides superb photographs of medieval stained glass, some of which I have reproduced in other posts. Amongst the images he posted on her feast day of St Agatha was this panel, now in St Mary's Shrewsbury, but originally from the Trier region. 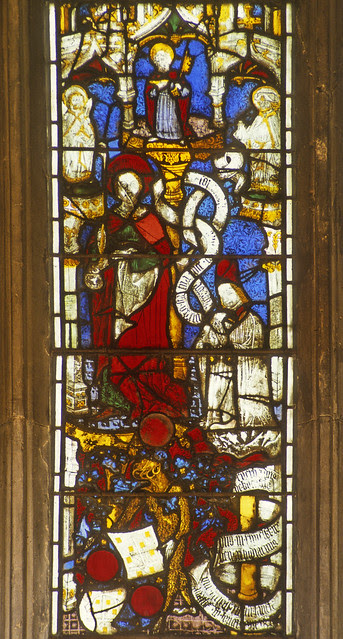 
What really caught my eye was the donor, identified by Gordon Plumb as Everard von Hohenfels, who held various positions in the cathedral at Trier from 1470 until his death in 1515 - or more particularly his headgear. He appears to be wearing, in addition to his surplice and cassock, a rather splendid red pileus.

Last year when I posted about the St Vincent Panels in Lisbon, which date from the 1460s, a friend asked me in the comments box about the red pileus he is shown wearing with his dalmatic. 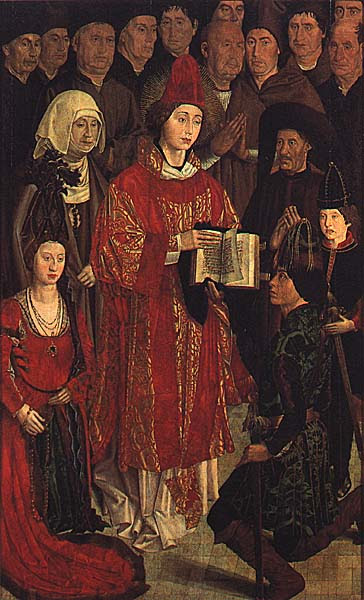 I could offer no certain explanation, but wonder if it is a fifteenth century equivalent of a modern monsiegnorial or canon's biretta - St Vincent as the immediate deacon of his bishop, Everhard von Hohenfels as a senior figure in the cathedral at Trier. Some of the lay figures in the St Vincent panels are wearing similar head coverings. Given the location of Trier and the possible Burgundian influence on the St Vincent paintings it may reflect Netherlandish practice in the later fifteenth century.

Given that together with aother friend we once upon a time spent may happy hours considering whether medieval bishops actually wore green galeros (as in their heraldic form) maybe I should keep my eyes open for instances of the red pileus. It is a rather natty item.

I want to recommend you two very complete webs about the legend , art and history of Saint Vincent of Saragossa as a very important saint in Spain in fourth century, developed by Via Vicentius . These webs are written in Spanish by Via Vicentius but it can be easily translated to english or any other language with the translator tool that the web includes. It would be great if you visit the web for public knowledge of our work .


Very complete web about pilgrim way from Huesca to Valencia for walkers and cyclists of Saint Vincent of Saragossa as a very important saint in Spain in fourth century, developed by Via Vicentius . It includes maps , history , images and many interesting informations concerning to the martyr saint.