Last night I was in Brighton for the Solemn High Mass of the Holy Spirit to celebrate the 150th anniversary of the opening of the completed church of St Mary Magdalen in 1862.

In February 1862 Pope Pius IX still exercised temporal rule over Rome and a reduced Papal State, Cardinal Wiseman was Archbishop of Westminster, Newman yet to write the Apologia, let alone get his Cardinal's hat, and the First Vatican Council had yet to be summoned. Queen Victoria was still in the immediate aftermath of the death of the Prince Consort the previous December, her Prime Minister was Lord Palmerston, whilst across the sea that laps the southern boundary of the parish Napoleon III ruled France and Bismarck had not yet been appointed Minister-President of Prussia.

As Fr Ray Blake pointed out in his notes in the service booklet the Catholics of Brighton showed great confidence in building a church that looked like a church and which was designed to promote an awareness of the Church by the beauty of the building and the worship offered within.

It proved to be a splendid evening - liturgically, musically and parish bun-fightwise - and the church was packed. Being Fr Blake's parish there was a high blogger count in both sanctuary and nave. The reception was a good occasion to meet up with freinds and acquaintances from the parish, and to sample a fine selection of Lenten celebratory fare that bore witness to the diverse and generous nature of the parishioners. The occasion was also a good one to see that further progress had indeed been made in the restoration of the church interior, which is very gratifying to see. 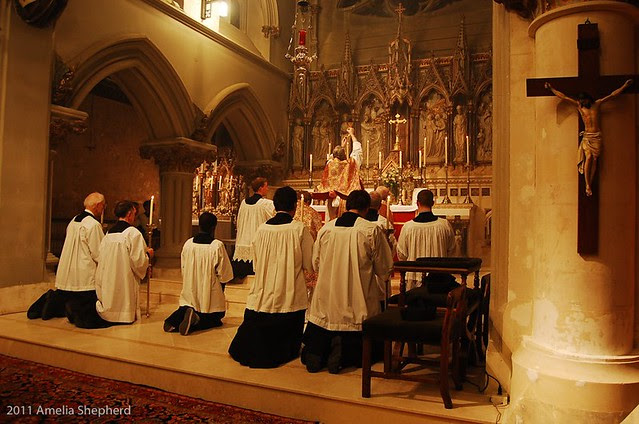 Fr Blake's initial account is at Processing the 150th, and he has now followed that up with two more posts Our 150th Pictures and Tom Bennett's Tu Es Petrus

Fr Tim Finigan was Deacon and preacher and he has posted his sermon at The Holy Spirit, soul of the Church and another post about the Mass at Evangelisation at Brighton.

The choir blog from the church about the Mass is here, and Mulier Fortis gives her impressions and pictures in At St. Mary Magdalen's..., A Closer Look At The High Altar... and Just Back... I would endorse all their comments about what a good occasion the evening was, but it was more than just a historic commemoration, it was a spiritual and holy event.

St Mary Magdalen's is a really splendid church in all senses - architectural, liturgical, musical, but also in those intangibles which are what the Catholic faith is about - and to be commended to anyone at all interested.

There are details of the rich variety of events the parish is putting on to mark the anniversary by clicking on the image below: 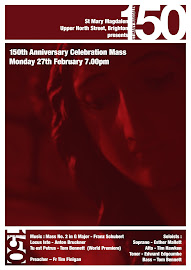 Many thanks for the post. It was a delight to see you here. I must say, I really enjoyed the evening, and my pleasure is increased by the thrill that you and so many others got out of Monday.