Last night I attended the Ordinariate Solemn Evensong in Blackfriars here in Oxford. As Mgr Burnham pointed out this was the first specifically Ordinariate liturgy to be celebrated anywhere, as opposed to the Roman Rite which they use for the celebration of Mass.

There was a sizeable congregation drawn from the Oxford and Reading Ordinariate groups, from local Catholic parishes and from Anglicans who were clearly very interested to see what was going on within the Ordinariate. There were also Catholic clergy in choir and the congregation as well as two Knights of Malta. Also present - well it is his current base - was the indefatigable Fr Lawrence Lew O.P. with his camera, and you can see his fine set of pictures here from his Flickr photostream. His article for the New Liturgical Movement with some of the photographs can be read at Solemn Evensong & Benediction in Oxford. On one picture the unwary can indeed catch a glimpse of myself in the congregation. Apart from that the set gives an excellent impression of a service with fine singing and music and with splendid ceremonial.

The liturgy was according to the Book of Divine Worship, as the legitimate approved text, although that will undergo revision. As a result the suffrages sounded a little unfamiliar, but otherwise this was Anglican patrimony in terms of language and form, but with Anglo-Catholic patrimony in terms of ceremonial and vesture ("choreography by Fortescue, but libretto by Cranmer") indicating how the traditions have intersected.

Reflecting the Anglican heritage was the decision to have a votive Evensong of the Holy Spirit, celebrated in red, and evoking the old Pentecost Octave, rather than the green of Week 11 of Ordinary Time. The Incensation of the High Altar during the Magnificat.

This point could be seen further in Benediction, which is not provided for by the BCP, but did become part of the Anglo-Catholic heritage. 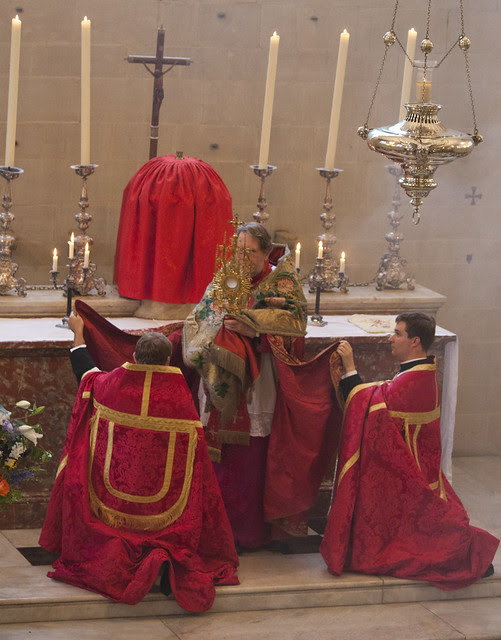 Afterwards at the reception there was a sense of bridges being built and new links forged, and a sense that the Ordinariate had taken a significant step forward both in numbers and in asserting its identity, as well as demonstrating its liturgical heritage and skills.

The hospitality of the Prior and community of Blackfriars was greatly appreciated as well as the loan of the celebrant's cope, as well as that of other vestments from the Oxford Oratory.
Posted by Once I Was A Clever Boy at 16:35