A quiet weekend of piety


Having celebrated Corpus Christi in the Extraordinary Form on its traditional day last Thursday the Clever Boy was able to continue celebrating in the Ordinary Form over the weekend, even if in extraordinary ways.

On Saturday evening he betook himself to the Oxford Ordinariate group Mass at Holy Rood in Abingdon Road. This is the new place of worship for the group's Saturday Vigil Mass, and despite its rather austere exterior has an interior that is prayerful and spacious.

Holy Rood
The homily was given by Daniel Lloyd, now a deacon in the Ordinariate, and concentrate don his participation in the conference last week in Rome on Eucharistic adoration - something with which the Mass had been prefaced and which it is planned to establish as normal practice.

Following the Mass there were refreshments provided by Fr Paul Berrett and his wife to celebrate his recent ordination to the priesthood within the Ordinariate, followed by a visit with some of the younger members of the group to a local hostelry for drinks and discussion (i.e. church gossip). During this it the Clever Boy was asked if he could lend a white bow tie to wear as part of sub fusc for the next day's Corpus Christi procession, as the wearing of academic or professional dress is encouraged on this occasion. Yes, if I can find it, and if you 're wearing sub fusc I will as well, said the Clever Boy. So after a visit to the Oxford Union with part of the party (more drinks and gossip), he went off home to find and wash a white shirt and bow ties for the morrow. Other went off to prepare at SS Gregory and Augustine (vide infra)

Sunday morning and up in good time to dress in sub fusc ( dark suit, white shirt and bow tie, black shoes and socks) worn under the appropriate academic gown, say the office and off to get the 9.15 bus to St Gregory and St Augustine Oxford where the Clever Boy had been recruited to help as an additional server (one of the seven acolytes) for the visit by the Archbishop of Birmingham to bless the restored reredos and crucifix and celebrate Pontifical Mass. 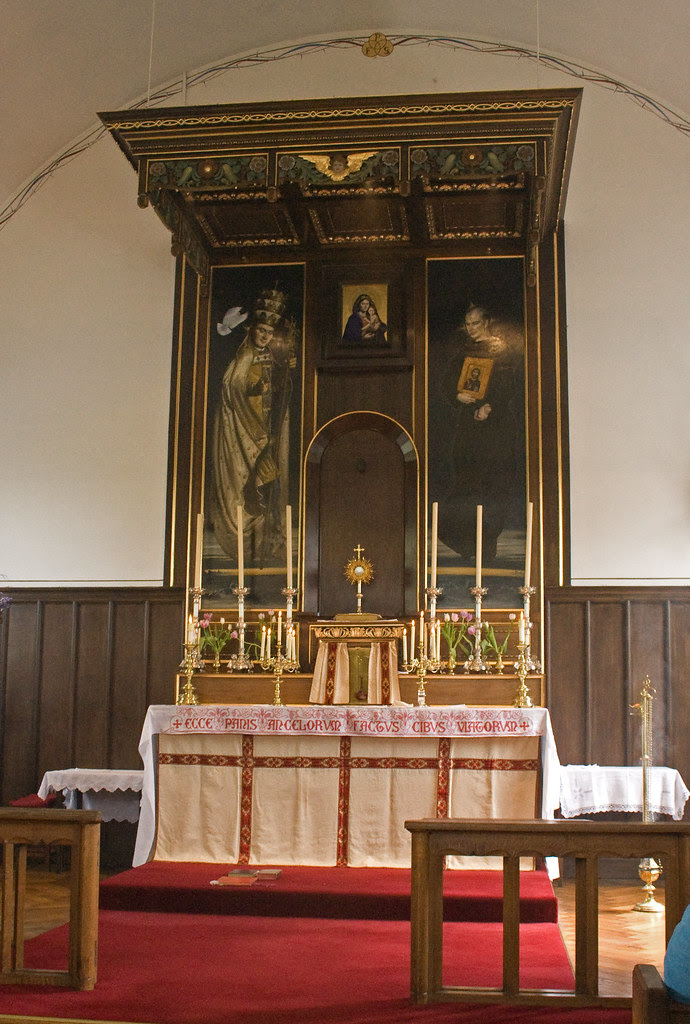 The altar and reredos during Exposition of the Blessed Sacrament at SS Gregory and Augustine.

Great effort had been put into decorating the church with flowers and polishing and tidying. One server had 'borrowed' from his landlady (who, thankfully, was quite happy when she found out why her carpets had disappeared during the night) various Turkey rugs to enhance the sanctuary.

The Archbishop, having checked as to when he had met the Clever Boy before, assured him that he has a doppelganger - Cardinal Walter Kasper. Cardinalatial red would complete the effect. A recourse to the internet has yielded this photograph - I think I can see a resemblance, but who knows there own face?: The liturgy went smoothly, starting with the formal reception of the Archbishop at the entrance to the church with a crucifix at the kneeling desk, and a series of dedicatory prayers for the altar crucifix and new images of the saints. When pictures are available they will be posted.

Following Mass there was an excellent barbeque on what was becoming a very hot day ( not ideal in winter-weight suit and gown) before departing back by bus to the city centre for the deanery Corpus Christi procession which started at the Oxford Oratory at 2.30. By now it was the hottest day so far of the year. The following pictures are from the Oxford Oratory website of what was once again a well attended and impressive witness of devotion to the Blessed Sacrament.

As in previous years the CleverBoy was acting as a steward, so over the suit and gown went one of those tasteful luminous yellow waistcoat worn by roadmenders and the like, as the procession set off.

Diocesan clergy and religious in the procession with Bishop William at the right.

The Sacrament borne by the Prior of Blackfriars Fr John O'Connor.

The canopy bearers are pupils from the Oratory School at Woodcote near Reading, which was originally founded by Bl. John Henry Newman.

The Provost of the Oxford Oratory, Fr Daniel Seward, in his 'Mafia priest' look.

The Clever Boy can be seen in the background as one of the stewards flanking the Blessed Sacrament - vanity, O vanity.

The procession paused for a homily from Bishop William Kenny, the area auxiliary, at Blackfriars and then passed through part of the city centre, past the site of the birthplace of St Nicholas Owen and past the sites of the medieval Greyfriars and Blackfriars to the University Catholic Chaplaincy.

Those in the procession are encouraged to wear their academic dress.

Bishop William Kenny bestows the Benediction of the Blessed Sacrament.

After Benediction at the chaplaincy there was just time for some glasses of water to counteract the seeming risk of dehydration before shedding the luminous yellow waistcoat and setting off with others at 4.40 to walk back up to St Giles for 5 to share a taxi out to Dorchester on Thames. There at the exquisite church of St Birinus, Dorchester Fr David Elliott, who was ordained the previous day in Portsmouth Cathedral, and was formerly Vicar of Holy Trinity Reading, was to celebrate his first Sung Mass at 7. The Clever Boy was not serving, but was asked to act as photographer (he is not sure how the photographs came out, particularly as he sought to be unobtrusive). The Mass was elegant and there was an excellent homily from the parish priest of St Birinus, Fr John Osman. As well as Fr Elliott's Reading Ordinariate group there were members and supporters of the Oxford group as well as regular members of St Birinus' congregation.

Mass concluded with a procession of the Blessed Sacrament around the extensive grounds of the presbytery and Benediction in the church. To celebrate there were drinks and refreshments on what was a warm summer evening in the presbytery garden, and a chance to meet up with old friends and make new ones. At 10.30, in the fading light, the taxi conveyed the Oxford party back to the city. and the Clever Boy made his fairly weary, but very happy, way home, still in full academic dress. The Clever Boy slept well that night - the fruit of simple piety.

Thank you for such an excellent report of a wonderful. God has blessed you so very well!