The reception of Newman in Germany


Last Wednesday evening I was at the lecture I advertised the other week by Professor Claus Arnold of the Johann Wolfgang Goethe-Universität, Frankfurt am Main on " Newman’s reception in Germany: From Dollinger to Ratzinger" which was the 2011 Newman Lecture in Oriel. 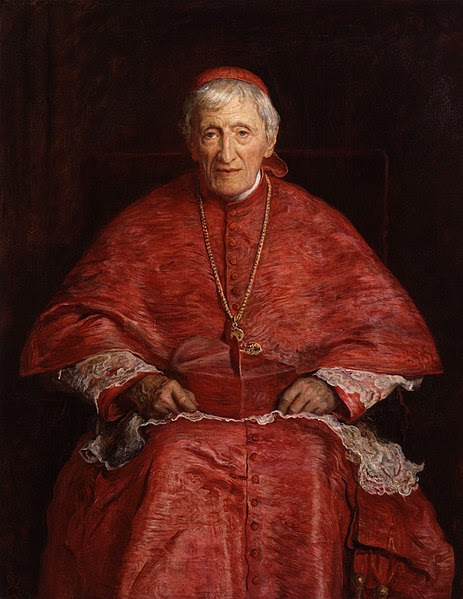 John Henry Newman
by Sir John Everett Millais
The lecture was a masterly exposition of its subject, and indicated how from the time of his reception into the Church Newman was and has continued to be of interest to, and influenrtial of, German Catholic opinion.

For this group, represented by the writer Joseph Gorres ( 1776-1848) and Ignatz von Dollinger (1799-1890) the Munich church historian Newman was of interest because they saw the Oxford Movement as the most significant movement of its time in its resistence to state control of the Church, exemplified for them by the imprisonment by the Prussian government of the Archbishop of Cologne in 1835 for his opposition to mixed marraiges.

They also appreciated The Idea of a University - dreaming of such a Catholic foundation in Germany - and the Apologia, translated in 1864, the year of its first publication and seen as a defining work. After Vatican I Newman and Dollinger were, of course, to take divergent paths over the definition of Papal Infallibility.

1870-1918: The Model for a Culturally Acceptable 'Reform Catholicism'

In the age of the Kulturkampf for some Newman was neither neo-scholastic enough nor ultramontane enough. However Franz Xavier Kraus (1840-1901), the Freiburg church historian, saw in Newman, Dante and Rosmini the sources for a religious rather than a political Catholicism. He had links to Lady Blennerhassett (born Countess von Leyden) (1843-1917) who in 1904 published the most important German biography of Newman. Reviewers at the time were more impressed by Newman's ethical work than his historical aspect, and they regretted his inability to speak German which would have opened up to him research from German academics. Others began to contast Manning's brand of 'Ultramontane Catholicism' with Newman's 'Reform Catholicism.' Protestants such as Ferdinand Kattenbusch (1851-1935) the Halle theologian were ambivalent in their attitude.

For those who in Wilhelmine Germany sought to define a place for Reform Catholicism the English anti-Protestant Newman was a model to study, especially when Pope Pius X had endorsed Newman's orthodoxy.These ideas were articulated by Carl Muth (1867-1944) , editor of the influential journal "Hochland" and by Matthias Laros (1882-1965) the priest and writer who studied Newman's Anglican sermons and produced between 1922-40 a 10 volume translation of Newman's works.

The First World War saw no decline in interest in the work of the English Cardinal and it was Romolo Guardini who drew attention to the idea of Church as Community in Newman's work. Laros stressed the idea of organic growth and the anti-Liberal in Newman. He and
Erich Przywara SJ (1889-1972) philosopher and theologian, whilst offering differing emphases in their interpretation maintained interest in Newman, the "Pius X of the Oxford Movement", and stressed that the issue was not Aquinas or Newman, but Aquinas and Newman. Theodor Haecker (1879-1945) was a writer and translator with an interest in Newman, translating The Grammar of Assent and like Edith Stein a convert influenced by Husserl's phenomenolgy. Haecker was an influence on and contact with Sophie Scholl (1921-1943) and members of the White Rose resistance group, whose indebtedness to Newman's teaching on conscience has been demonstrated by research in recent years.

1945-1962: The Model for a Re-Christianisation of Germany in an Ecumenical and European spirit.

Interest in Newman was apparent from the end of the Second World War. Thus in October 1945 there was a Newman Conference in Cologne, and awareness of him came through the influence of Birmingham Oratorian and students, including one who taught prisoners of war who were planning to enter the priesthood on their return to Germany. In 1946 there was the publication of an article by Paul Simon on Newman and German Catholicism in The Dublin Review , and from 1956 the Luxemburg Conferences on Newman.

Amongst those influenced by these developments were Heinrich Fries (1911-1998) the Tubingen and Munich theologian, who taught the young Joseph Ratzinger,Gunter Biemer (b.1929) the Freiburg theologian, who studied at Oscott and Joseph Ratzinger himself (b.1927) who in the late 1940s became aware of Newman. For him the Augustinian tradition, the relation of Church and country an not subjecting one to the other, and the understanding of the development of doctrine were to be of great importance.

In conclusion Prof. Arnold said that it should be no surprise that the Pope has shown such appreciation of the work and thought of Newman given the range of German interest in Bl.John Henry over more than a century and a half.

Thank you for such an excellent summary of what sounds like a fascinating lecture!