Last Saturday I went on an excusion with the Brothers of the External Oratory in Oxford and organised by our prefect Fr Jerome Bertram to Coughton Court in Warwickshire. This was my first visit to this great recusant house ansd the whole day was both very enjoyable and informative.

CoughtonCourt (pronounced Coaton) has been the home of the Throckmorton family since 1409, although since 1946 the house has been vested in the National Trust. The Throckmortons and their house have survived the Wars of the Roses, the various stages of the English reformation, the Throckmorton plot involving a cadet member of the family, the Gunpowder Plot, the Civil War, the revolution of 1688 when the chapel was sacked by the mob, the civil disabilities laid on Catholics post-1688, and, following Catholic emancipation (the family produced the first Catholic MP after that legislation, winning one of the Berkshire seats in 1832), the agricultural depression of the nineteenth century, death duties, two world wars and everything else the twentieth or any other centory could throw up, and are able to boast of a continuity of occupancy and faith for over six centuries.

In particular the family are famous for their links to other notable Midland recusant families, such as the Catesbys and the Treshams, as well as Sir Walter Raleigh, and the family and the house feature in the story of the Gunpowder Plot. There is an article about some of its historyhere.

The oldest part of the presnt house is the gatehouse built by Sir George Throckmorton in the second decade of the sixteenth century . Successive rebuildings and repairs have produced a house with features of a wide range of styles right down to the saloon from just before the Great War. 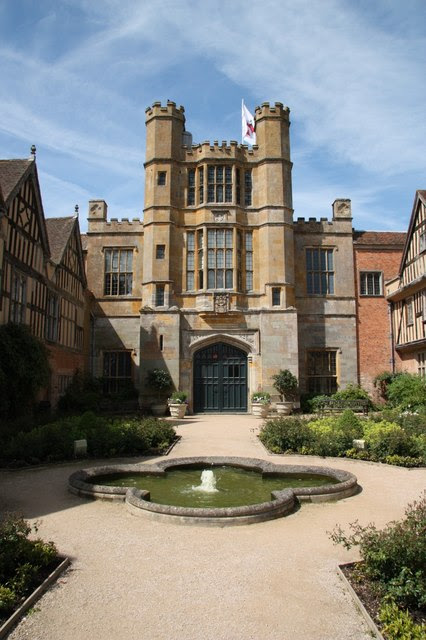 The gatehouse from the courtyard

Amongst the many interesting relics in the house there is the remarkable Tabula Elienis, a painted cloth dating from 1596. So called from its picture of Ely cathedral and similarity to another example there, it depicts English kings and monnks, as well as the arms of recusant families, and appears to be a depiction of recusant heritage and identity. It is displayed in the tower room where the wives of some of those involved in the Gunpowder Plot awaited news of their husbands in 1605. 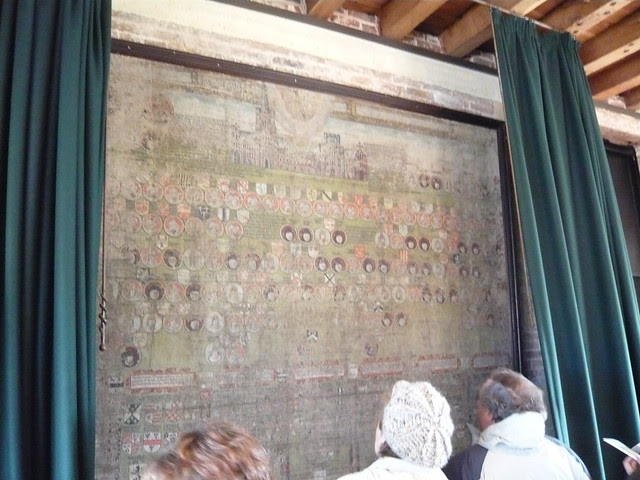 The Tabula Eliensis
Image:Keybuk photostream
Another room had a fascinating display of treasures including what is believed to be the chesmise worn by mary Queen of Scots at here execution in 1587. Apparently it bore blood stains until relativelty recently. One thing which struck me as being in support of the tradition is that its length would fit with the fact that Queen Mary was a tall woman. In the same room were mementoes of her descendants the Jacobite Kings James III and VIII, Charles III and Henry IX and I. 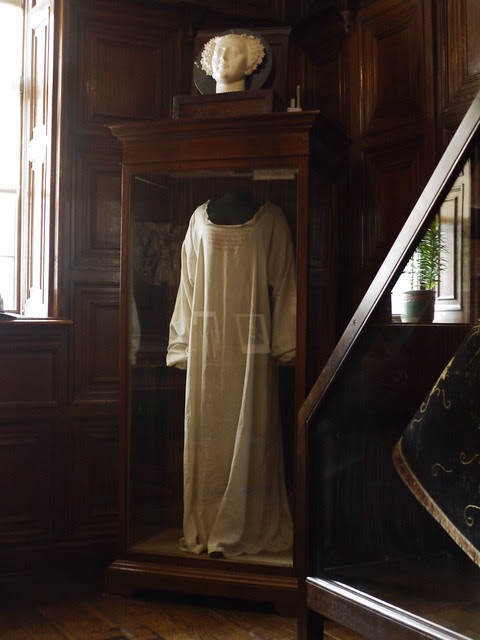 Chemise worn by Mary Queen of Scots at her execution
Image: Felicityfaery photostrean on Flickr

In the same room, but rather difficult to appreciate because of the necessarily low light levels and the case in which it was displayed, was a cope which is associated through its pomegranete motifs with Queen Catherine of Aragon. This photograph gives a better idea of the vestments which has been restored in recent years. It is, I think, Sarum blue rather than purple, and is a very fine piece of early sixteenth century work. 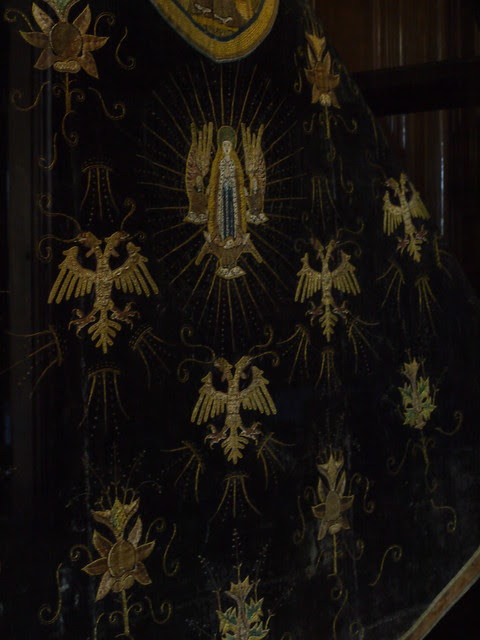 The Catherine of Aragon cope

In the same room were a selection on manuscripts on display, including a late medieval priest's manual in which the clause giving the Pope's name could be seen to have been blotted or smudged out from the canon of the Mass as directed by King Henry VIII in the 1530s.

Elsewhere I was interested to see the possessions of a female members of the Throckmorton family who had been a lady-in-waiting to the Empress Elisabeth of Austria, including photographs of the Empress and the young Crown Prince Rudolf and the insignia of the Orders of the Starry Cross and of St Elizabeth.

We did not really have enough time to explore fully the gardens which have been developed by the family in the last fifteen years, but as well as the nineteenth century Catholic church built by the family we also looked in the late medieval parish church which adjoins the house, and contains many Throckmorton tombs. Like the gateway to the house it is a reminder of the prosperity of late medieval midland England.

The tombs include those of Sir George, the builder of the gatehouse, and his wife, of the last Abbess of Denny in Cambridgeshire, who, as a member of the family, returned to Coughton with two of her nuns to live out their lives, and, presumably, their vocations there. There is also the handsome tomb of Sir John Throckmorton(d.1580) and his wife Marjorie. A younger son he was alawyer and judge, apparently dismissed not long before his death by Queen Elizabeth I for his recusant sympathies. He lived at feckenham in Worcestershire, and his son Sir Francis gave the family name to the throckmorton Plot of 1583. I particularly liked this panel on the tomb base showing the sons as mourners and presumably including the conspirator Francis: 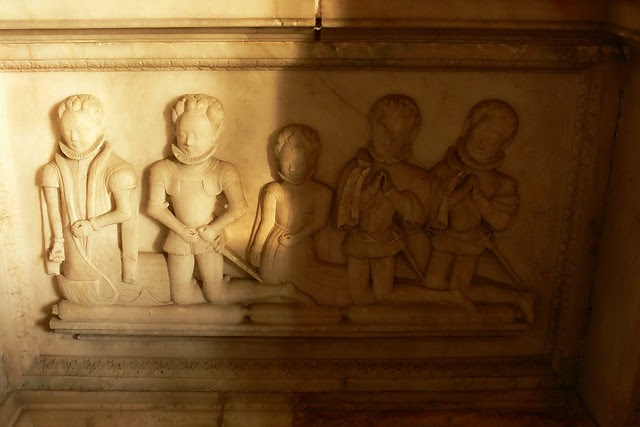 The mourners on the tomb base. 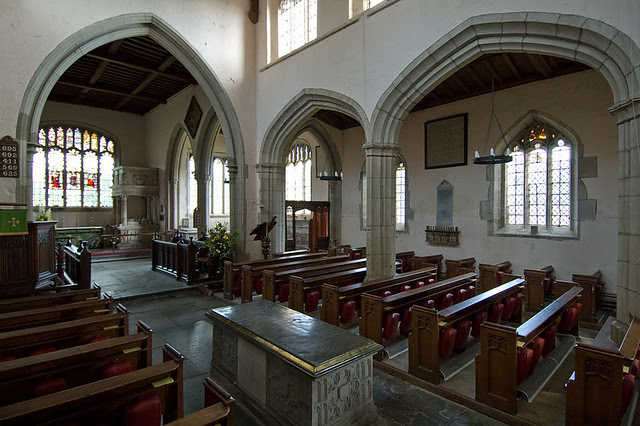 The interior of the church.

Sir John Throckmorton's canopied tomb is to the right of the altar.

The one in the foreground was intended for one of his ancestors who died on pilgrimage to the Holy Land in 1518.