This evening is the 125th anniversary of the death of King Ludwig II of Bavaria.

The story of King Ludwig is well-enough known, but there is a useful illustrated online biography, with references and links, here. There is a recent illustrated article here about the anniversary.

It appears clear that whatever the problems dormant in him, at his accession he was very popular, and indeed retained the affection of many until his death.

King Ludwig II in the uniform of a general and coronation robe.
Ferdinand von Piloty, Munich, 1865.

Whatever explanation there is for the King's eccentric behaviour - and it is not too difficult to see why many Bavarians had their concerns about their King - there is no doubt that his patronage of the arts, both in building, notably Neuschwanstein, Herrenchiemsee and Linderhof, and in music as the admirer and patron of Wagner, he left a spectacular legacy. 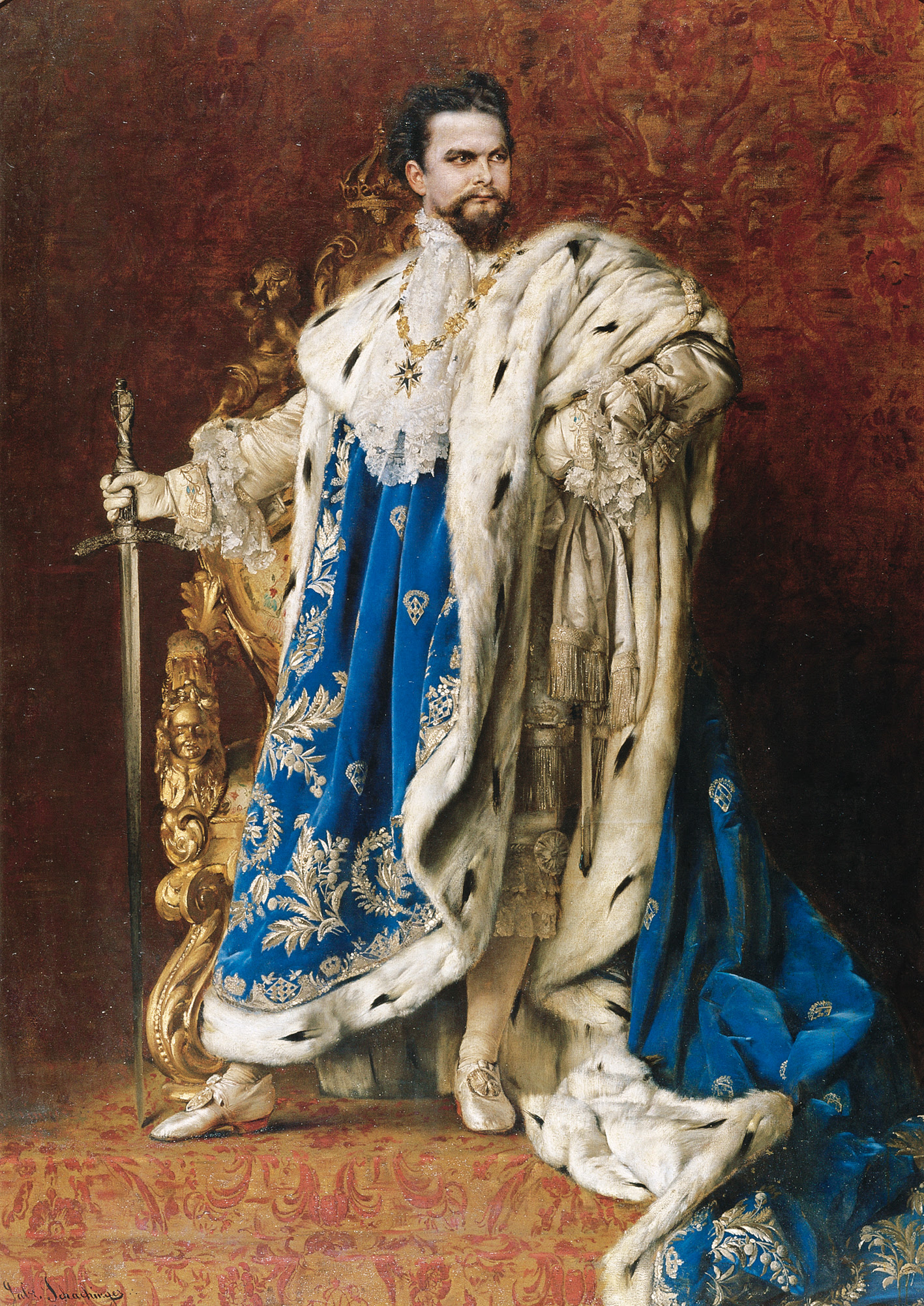 King Ludwig II in the robes of the Order of St George
by Gabriel Schachinger, completed in 1887.
Image: Wikipedia
As a monarch in his era he appears to have retreated from the mundane requirements of office into his own sense of what Kingship was about. Hence the delight in ceremony and the setting for monarchy, but not the practical necessities of sitting at the desk with state papers, or indeed, avoiding near bankruptcy for the dynasty.
He brought energy to realising his vision. Perhaps this was an expression of a frustration at being relatively powerless in what seemed a mundane, modern world.

In some ways he is reminiscent of some modern figures in the world of entertainment who have everything and lose it all in a whirl of indulgence and eccentricity. The phenomenon may not be unique - what marks out "Mad King Ludwig" is who he was, and the wonderful legacy he left to his country and the world.
That said, King Ludwig was not as unusual as a builder as he might appear in some accounts of him. His building enthusiasm is only the ultimate in such activities. Nineteenth century Britain saw the re-medievalisation of the castles at Windsor and Arundel by King George IV and the Duke of Norfolk - the latter also built three future cathedrals. A similar process happened wth the Duke of Rutland at Belvoir, There was also the Marquess of Bute with Cardiff Castle, Castell Goch and the only recently completed Mount Stewart, whilst one of the Dukes of Portand built a great series of undergroud features at Welbeck, and like King Ludwig was a recluse. By contast Queen Victoria's osborne and Balmoral are rather subdued, but monarchs were still builders. So too was the church - think of the Anglican or Episcopalian cathedrals in Truro or Liverpool, Cork or Edinburgh, or the neo-gothic cathedrals of North America or Australia. What marked out King ludwig Ii was the scale in a short time in a relatively small kingdom.
He also is a witness to the appeal of German Romanticism in art and architecture, in word and music, to the middle ages. In that he was by no means unique. Other memebrs of the House of Wittelsbach and rulers like King Frederick William IV of Prussia embraced that in their buildings and ideas.
King Ludwig II, along with Kaiser Wilhelm II, is a reminder also of the vitality, or indeed hyper-vitality, of ideas about Kingship in the German Empire of those years. Not all the royal houses were as prosaic as, for example, the Kings of Wurttemburg.

There is much that is tragic, or at least painfully sad, about his life and death, and one can at least remember him in one's prayers on this anniversary and pray for the repose of his soul.

The memorial chapel erected near where King Ludwig II drowned in Lake Starnberg in 1886. 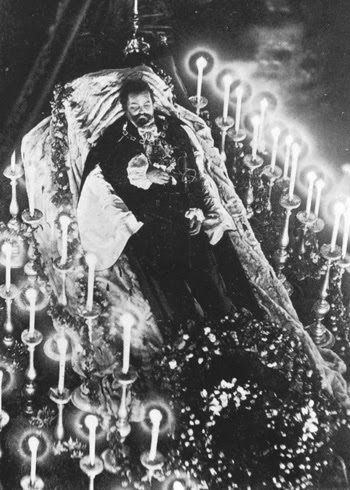 King Ludwig II lying in state in the Hofkappelle Munich in 1886.
He is wearing the robes of the Order of St Hubert.

Image: hansgreuner.de
Posted by Once I Was A Clever Boy at 14:28