Today is the anniversary of the assassination of Archduke Franz Ferdinand and his wife at Sarajevo in 1914. Please remeber them in your prayers, and pray for the peace of the world and deliverance from radical, purblind, extremists. My post for this day last year can be read at Sarajevo remembered.

The assassination and the circumstances and possibilities - the "what ifs", or to be smart, the "counterfactuals" - and its continuing impact exert a fascination on my mind, and should, I believe, on those of others. For all the work of historians in, quite correctly, discerning trends and patterns there are specific moments when change occurs, events which do, literally, change the world. The Sarajevo assassination is one of them.

Looking at whatI wrote last year the only change I would really make would be to be firmer in my repugnance at the fate of the Archduke and his wife, and the consequent fate of us all - we all live in a world that came into being that sunny summer morning.

Dedijer's book remains the classic account, although it can be supplemented by later books. It was inevitably constrained by its author's background and the times in which he wrote, but it is agreat piece of work. One question I would have asked him, had I the possibility, was how many Bosnians were so taken up with violent revolutionary nationalism. Dedijer writes of all these groups - Pan-Slavs, South Slavs and Pan-Serbs - with precision and knowledge, but I do wonder to what extent they and their more passive supporters were a minority. They appear to share the same profile as other radical nationalist groups who, alas, manage to make the political running.

I have found some more images of that fateful morning, although they are refusing to expand to a larger size. Here then are the Archduke, the Duchess and Gen Potoriek, Govenor of Bosnia,
arriving at the city hall in Sarajevo:

The Archduke and the Duchess leave the city hall: The driver takes the fatal wrong turn on the Appel Quay and the Archducal car wheels can be seen to begin to turn to the right. The assassination happened seconds later:

I also found this picture, which is a reminder of the fact that Europe's reaction was to show solidarity with the Habsburgs in this assault on their Empire and dynasty: 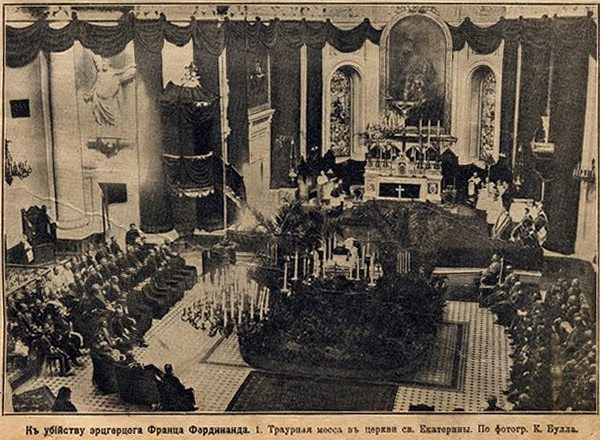 Requiem in the church of St Catherine in St Petersburg for Archduke Franz Ferdinand in 1914.