The departure of the Duke and Duchess of Cambridge on their first official overseas visit to Canada seems a suitable day on which to post my final set of reflections on their wedding. 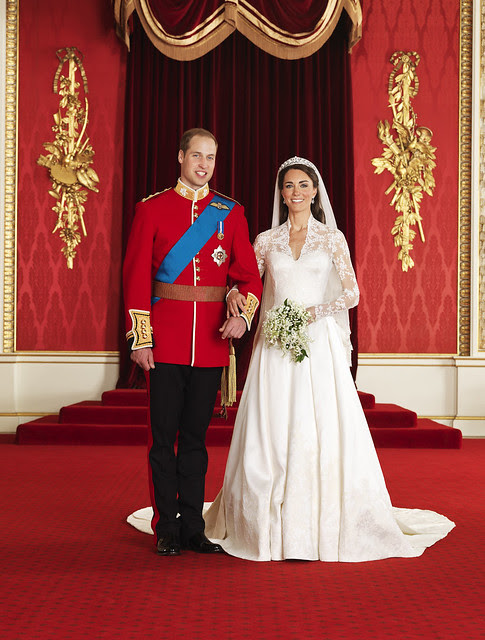 TRH The Duke and Duchess of Cambridge
One of the official photographs.

What struck me in particular about the wedding day was the sense that this was an event with a style and panache that was traditional, combining splendour with restraint. There was not the more elaborate or emotional style of the royal weddings of the 1980s, but an emphasis on traditional values and practice in both church and state. There was a real sense of being back on course, but with two new and attractive players centre stage. The best of the old and of the new.
The last time the sovereign's grandson in direct line of succession married was in 1893 when the future King George V as Duke of York married Mary of Teck. There is a description of that day in James Pope-Hennessy's wonderful official biography Queen Mary. That was essentially a private wedding in the Chapel Royal at St James's Palace. This time the scale was very different, and very much a public event as royal weddings have been since 1922. Nonetheless this seemed closer, in the best sense, to the certainties of the later years Queen Victoria's reign than some more recent marriages.
This emphasis on tradition, on service by the Duke and Duchess to the Crown and their prospective realms, the religious values stressed in the service itself, down to such details as the inclusion of the national flower emblems of the United Kingdom in the wedding dress of the Duchess, all indicate to me at least, a reassertion of a tried and tested way of doing things. The official photographs carried the same message - a happy young couple and their families, but also a real understanding of what monarchy is about.

Even within an institution based on the principal of continuity, we appear, to borrow a phrase, to be looking at a hermeneutic of continuity.

The new personal standard for the Duke of Cambridge for use in Canada.
The grant of this is in itself is both a new departure, and a reassertion of ancient tradition.
There is more about it here.