Today is the feast of St Alban, the protomartyr of Britain, in the current Roman calendar, although his dies natalis was June 22nd.

There is an account of him, and a discussion of the possible dates for his martyrdom in the third century here.

His status as protomartyr ensured the importance of the abbey which was founded over and around his place of martyrdom and burial at what became St Albans. The abbey church, now the Anglican cathedral, is a church which I find immensely moving - not only is it the shrine of St Alban, but as a building has suffered so many mishaps and accidents, as well as the dissolution and reformation, and a heavy handed restoration in the late nineteenth century, but has somehow managed to survive and still be in itself a witness to the enduring faith.

The martyrdom of St Alban by the abbey chronicler Matthew Paris c.1250.
Note the executioner's eyes falling out in retribution for his deed

For many centuries relics believed to be his have been preserved at the church of St Pantaleon in Cologne and in 2002 a scapula from these was presented to St Albans cathedral and placed in a restored shrine on the reconstructed medieval base. Cardinal Gasquet has an interesting article in his Monastic Life in the Middle Ages tracing the development of the original golden shrine which was destroyed in 1539. 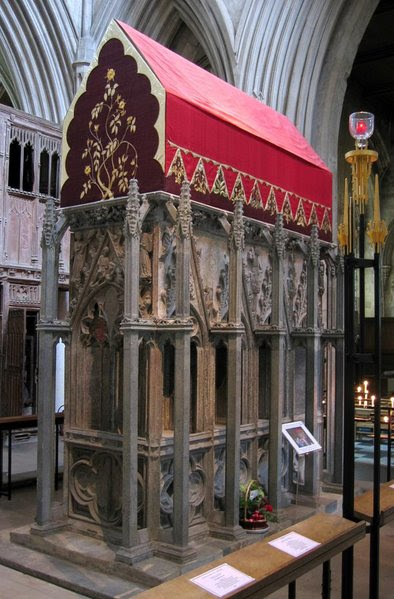 The restored shrine of St Alban


May St Alban continue to pray for us.