Traditionally today is the feast of St Matthias the Apostle, which was transferred in the 1970 novus ordo to May 14th. However as John Dillon pointed out on the Medieval Religion discussion group it is also a feast of St John the Baptist:

In Greek tradition the First Finding took place in the time of Constantine the Great (306-337) and was effected by two monks informed by John in a dream. The recovered head was brought in secret to another place where in time it came into the possession of an Arian who used its miracle-working presence to bring about cures for which he took the credit and who, having been exiled, buried the head against an intended return that never happened. Later, after a monastery had been built over the place where the head was hidden, John appeared to the monastery's hegumen Marcellus, apprised him of what lay beneath, and so put in motion the Second Finding. Coptic Orthodox tradition is very similar but identifies the churchman who effects the Second Finding as Martianus, bishop of Emesa. In the Latin tradition represented by the later ninth-century martyrology of Usuard of Saint-Germain the Finding took place in the time of the Emperor Marcian (450-457); this accords with the customary dates for the Second Finding (either 452 or 453).

According to its originally eleventh-century Hypotyposis (handbook of arrangements), at the Theotokos Evergetis monastery in Constantinople on only this feast and that of the Forty Martyrs of Sebaste would the monks break their fast during Great Lent.

Some medieval images of the First and Second Findings of the Head of St. John the Forerunner:

b) The First Finding (at bottom left) as depicted in an eleventh- or twelfth-century menologion of undetermined origin (Paris, BnF, ms. Grec 1528, fol. 216r):
http://tinyurl.com/ojwvlvo

d) The Second Finding (note the presence of the monastery church) as depicted in the St. John the Forerunner cycle in the earlier fourteenth-century frescoes (1330s) in the diakonikon of the church of the Hodegetria in the Patriarchate of Peć at Peć in, depending upon one's view of the matter, either Serbia's province of Kosovo and Metohija or the Republic of Kosovo:
http://tinyurl.com/83eevtp

e) The First Finding (upper register; lower register: the Entombment of St. John the Forerunner) as depicted in the earlier sixteenth-century frescoes (1545 and 1546) by Theofanis Strelitzas-Bathas (a.k.a. Theophanes the Cretan) in the chapel of St. Nicholas in the katholikon of the Stavronikita monastery on Mt. Athos:
http://tinyurl.com/6lgc36s

f) The First and Second Findings (bottom register, last two panels at right) as depicted in an earlier sixteenth-century icon, from Nyonoks in the Arkhangelskaya region, of St. John the Forerunner with scenes from his life, now in the Arkhangelsk Fine Arts Museum:
http://www.iconrussia.ru/eng/icon/detail.php?ID=5837
The Second Finding is represented by John's appearance to the hegumen Marcellus.

g) The First and Second Findings (bottom register, last two panels at right) as depicted in an earlier or mid-sixteenth-century Yaroslavl School icon of St. John the Forerunner with scenes from his life, now in the Art Museum in Yaroslavl:
http://www.icon-art.info/hires.php?lng=en&type=1&id=1128

h) The First and Second Findings (bottom register, last four panels at right) as depicted in two pairs of scenes (John's appearances; actual findings) in a mid-sixteenth-century Yaroslavl School icon of St. John the Forerunner with scenes from his life, now in the Museum of History and Architecture, Yaroslavl:
http://www.icon-art.info/hires.php?lng=en&type=1&id=1129

I will add that several places have claimed to possess the head. the best known in the west is Amiens cathedral, and there are articles about this relic at The Head of St. John the Baptist at Amiens Cathedral,at Priest Maxim Massalitin. The Untold Story of the Head of St. John and at The head of the Precious Forerunner in Amiens, France 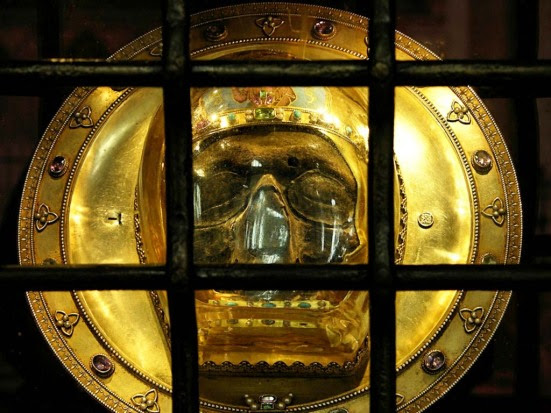 The Head of St John the Baptist at Amiens

The Shrine in the cathedral