I recently read the edition of Jocelin of Brakelond's Chronicle of the Abbey of Bury St Edmunds edited by Diana Greenway and Jane Sayers for the OUP World's Classic series. 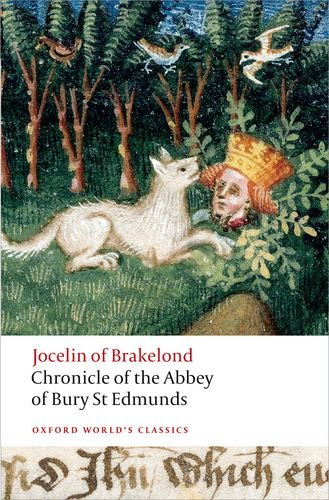 Like, I suspect, many people these days this famous Chronicle - often used to teach medieval Latin to undergraduates - is one that is more often cited than read through as a single text. Such was my knowledge of it until a few weeks back. Having found a copy of this excellent edition I sat down to read it for pleasure (yes, I am that sad a person). and it is indeed a pleasure to read.

What marks it out as a thoroughly enjoyable read is that Jocelin rises above the level of those monastic chroniclers who record abbatial elections and deaths and rebuilding programmes or news gleaned from the world beyond the enclosure as recounted to and by the community (however valuable that may all be to historians) to produce an account that is very much a memoir. It has a freshness and immediacy that is striking and entertaining.

We are provided with what might be termed real snapshots of life in the abbey, and there is a concern with detailed observation as well as details of the monastic estates and their vital role in supporting the community around the shrine of St Edmund.

The portrait given of Abbot Samson has made the Chronicle particularly famous.  I posted about the Abbot last year in Abbot Samson of Bury St Edmunds. Samson is often said to be the hero of the work, and Jocelin clearly knew and admired much in the Abbot. However it is also true that Samson is sometimes the anti-hero in his dealings with his monks and with others. Because these exchanges are so well recorded the reader really does see life as it was, and must have been, in not only the abbey at Bury but any monastic community. The monks discussing the suitability of various possible candidates for the abbacy is wonderfully human and a remarkable insight in itself - and there are many other such stories. In addition there are narratives such as that of the knight turned monk at Reading abbey and glimpses of the Angevin dynasty and their dealings with Bury.

Another feature which is noteworthy is the way in which Jocelin displays his learning by citing classical Latin authors - this was clearly a scholarly community as well as a praying one, and one determined to uphold the honour and authority of St Edmund, and the dignity of his shrine and church.


Maps and plans accompany the text plus a full set of useful endnotes which fill in the background to the events and places recorded by Jocelin. My post St Edmund and his abbey gives pictures of the site today and of the model of the buildings which can now be seen in the abbey grounds

It's a very interesting book that I enjoyed when I read it some years ago. Thank you for the links to the VR models of the abbey; I look forward to exploring them.