An English Alabaster of the Head of St John the Baptist

Following on from John Dillon's post which I republished in my post The First and Second Findings of the Head of St John the Baptist yesterday Gordon Plumb posted on the Medieval Religion discussion group this photograph of an English medieval alabaster from the Nottingham workshops: 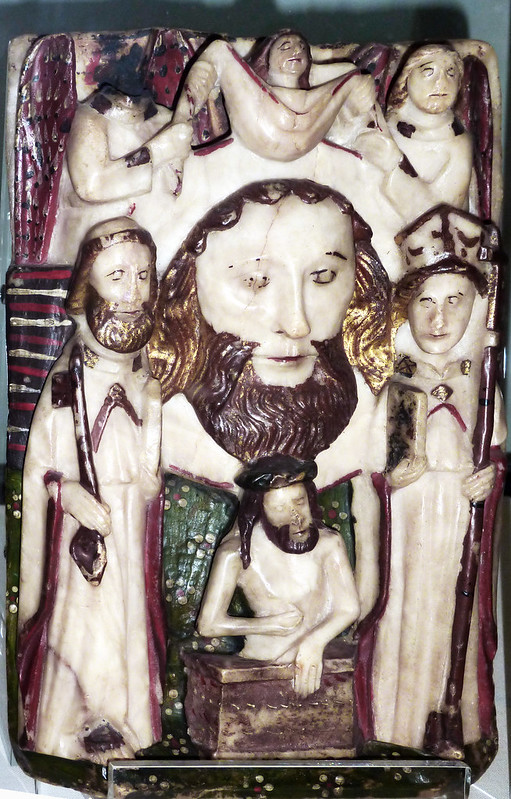 This panel, now in Nottingham Castle museum was purchased at Sotheby's in 1937. The head of John on a platter is central, flanked by St Peter and a bishop who is almost certainly St Thomas Becket. A Bury St Edmunds will of 1552 goes a long way to confirming this identification, for it speaks of "Seynt John hede of alabast wt Seynt Peter and Seynt Thomas and the figure of Christ". Prior to the date of this panel (c.1450-1500) we find the Agnus Dei beneath the head, but it later becomes replaced by the Christ of Pity. Above two angels hold the head in a napkin, symbolising the saint's soul being taken up to heaven. This subject is common in Nottingham alabasters, there being 20 Agnus Dei one and 45 showing the Christ of Pity. That is out of a total of 97 John the Baptist heads. The panels were designed for private devotion rather than fitting into an altar piece.

A similar piece from the Ashnolean can be seen in the Museum of the History of Science in Oxford.

Another example of this very popular medieval devotional image in a different design, and now in the Victoria and Albert Museum can be seen in my post The Decollation of St John the Baptist from last year.

John Dillon posted a further note about this and similar images of St John the Baptist, which I have slightly adapted:

Plastic images of John's head on a charger exist in media other than alabaster. Barbara Baert, "The Head of St. John the Baptist on a Platter: The Gaze of Death", Ikon (Croatia) 4 (2011), 1-12, is a useful discussion, nicely illustrated, of such images in late medieval thought and practice. It's available on the free Web at academia.edu:
https://www.academia.edu/533406/The_Head_of_Saint_John_the_Baptist_on_a_Platter._The_Gaze_of_Death_in_Ikon_4_Croatia_2011_p._1-12
TinyURL for that:
http://tinyurl.com/qagzhhe

A partial answer to the question about provenances occurs in the second paragraph of this discussion (also from 2011) of the late medieval English alabasters:
http://www.bowdoin.edu/news/archives/1academicnews/008214.shtml

Specimens of this craft were exported commercially in large numbers. Most of those that remained in England or went to Scotland will have been destroyed during the Reformation (or discarded then and destroyed later); most of those that one sees today in the Vand A (and, presumably, in the Burrell Collection as well) returned to the UK with modern travellers who had acquired them abroad.