Today being Shrove Tuesday seems a good day upon which to recommend a book for Lenten reading. I recently read a book which I would strongly recommend as suitable for this season, or for Eastertide up to Corpus Christi, or at anytime if you wish to reflect upon the theology, and reality, of the Eucharist. Jesus and the Jewish Roots of the Eucharist: Unlocking the Secrets of the Last Supper is by an American theologian, Brant Pitre, and published by Doubleday in 2011. 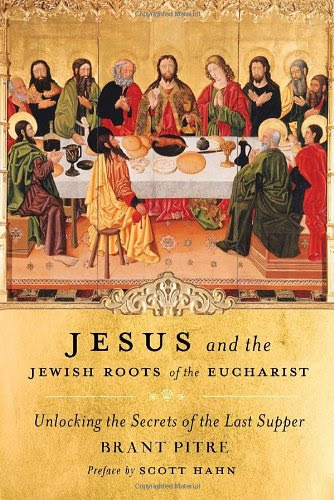 At first sight it suffers to a British reader's eye from being written in an at times conversational and somewhat popularist manner, but I assume Dr Pitre is aiming for a wide market in the US. Once you have got used to his style and as he moves to his main arguments the book is more useful and usable.

Using the Biblical narratives and contemporary Jewish commentaries and later Jewish traditions he examines in detail the actions and intentions of Our Lord at the Last Supper, as well as His self-proclamation and ministry, and how those actions accord with Jewish expectations of the Messiah and as to how literally the injunction to eat His Flesh and drink His Blood was intended.

In some ways I was reminded as I read it of Pope Benedict XVI's Jesus of Nazareth, and if readers found that a valuable guide, then I think Dr Pitre's book will also appeal. There is a similar attention to the realities of first century life and practice. The Jewish and Temple traditions are made available to readers who would in most cases  be unaware of them.


Some of the ideas he discusses I was already aware of (indeed he disarmingly points out inhis conclusion that much of what he says in not new), but I found many new insights in the book, and things I did not know - things which certainly augment my understanding of the institution of the Eucharist.

Having read this book I am reminded that I really must read some of the works of Margaret Barker who also looks to the origins of the Liturgy in the worship and life of the Temple. Lenten reading for me perhaps? In the meantime I do heartily recommend Dr Pitre's book.