Unto us a Son is Given


A Holy, Blessed and Joyful Christmas to you all 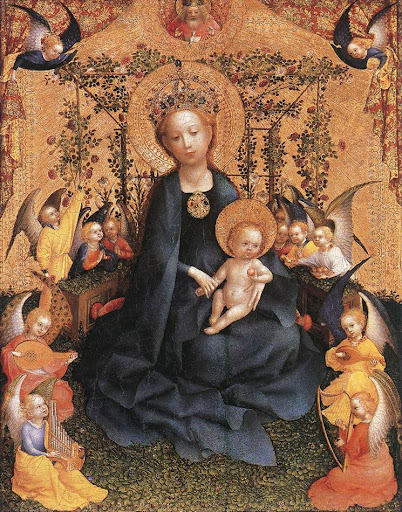 
This small panel which employs several iconographic models is an especially charming remnant of Cologne Gothic.

Image and Notes from the Web Galley of Art

This is, in effect a republication of the post I have produced for Christmas Day for several years, although last year I varied it with the equally fascinating votive panel of Archbishop John Ocko of Prague from circa 1370, which can be seen at O Come Let Us Adore Him.


Using it has become something of a tradition and Christmas is avery tradition-conscious time of the year. I particularly like this image of Our Lady and the Christ Child and I have also used it to decorate my Christmas letter to friends some years. As an image it combines great beauty and delicacy, the tenderness of the mother-child relatiomship, the joy and delight of the angel musicians, and the references in the rose bower to the rich biblical and liturgical horticultural images of new life and renewal. The notes accompanying the picture draw out the symbolism further. It is also a painting from a period of history which is of particular interest to me.

I hope it conveys some of the joy and hope as well as the delight of Christmas, and I wish that to all my readers.