Insignia of the Order of Malta


A friend, who frequently sends me such useful and interesting links, has sent me this photograph from a Bonhams auction catalogue from 2006 of some insignia of the Order of Malta which was due to be auctioned. 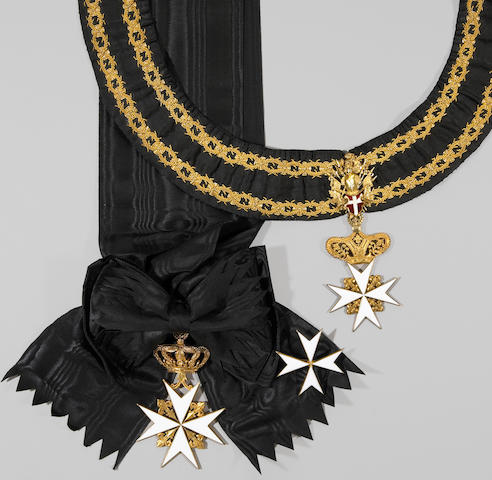 All contained in red leatherette cases with maker's stamp of Cravanzola/Gardino of Rome on interior lids.

The sash badge and profess cross are later manufacture than the neck badge, consistent with the progress of a single recipient through the ranks.

Condition: All extremely fine, (1) with old professional enamel repair on trophy of arms.

This combination of badges represents the rank of Bailiff Grand Cross of Honour and of Devotion with Profess Cross ad honorem. At present [2006] there are only two living holders of this rank: His Imperial and Royal Highness Archduke Otto von Habsburg-Lothringen as Head of the Austrian Imperial Family and His Majesty King Juan Carlos I of Spain.


My friend adds that what Bonham’s calls the ‘profess cross ad honorem’ is better understood when translated as ‘Honorary cross of profession’. Within the Order with its complex series of grades it is the cross worn by the professed, celibate, Knights of Justice, which can be awarded to Knights of Grace as an exceptionally rare honour. Honour and Devotion is the class with strict noble proofs, and he thinks that of the non-professed Knights only those of Honour and Devotion can be made Bailiffs.

Other person with the same grade was King Michael of Romania.