Our Lady of Guadaloupe

Today is the feast of Our Lady of Guadaloupe, the principal Marian patronage of the Americas. 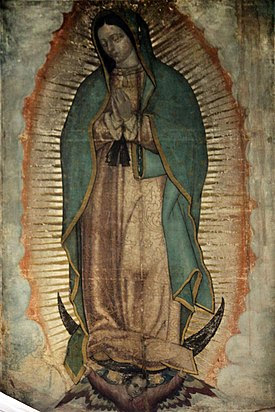 Our Lady of Guadalupe

There is an illustrated and comprehensive account of the story of the apparition, ther history of its reception as a devotion and details of the recent scholarly examination of the tilma of St Juan Diego at  Our Lady of Guadalupe
Very early one Saturday morning at the beginning of December of 1531, a poor but respected Indian called Juan Diego (born, it is said, in Cuauhtitlan and under the pastoral care of the religious community of Tlatelolco) was on his way to Tlaltelolco on a holy errand. When he reached the hill called Tepeyac dawn was breaking and he heard singing coming from above the hill. The singing stopped and was not heard again, but he heard a voice calling to him from the top of the hill. “Beloved Juan Diego,” it said. He responded at once, bravely climbing the hill towards the place where the voice was coming from.
When he reached the top he saw a Lady standing there, who called him to herself. When he came close to her he was stunned with how beautiful she was: her clothes shone like the sun. Then the Virgin gave him her command: “Know, beloved son, that I am the immaculate ever-virgin Mary, Mother of the true God who is the Origin of all life, who creates all things and keeps them in being, the Lord of Heaven and Earth. I greatly wish, I earnestly desire, that my house should be built in this very place. I will show him to you there and praise him as I show him, my Love and Compassion, my Help and Defence. For in truth I am your compassionate Mother, yours and of all who live together in this land and of any others who love me, seek me, and call on me with confidence and devotion. In that house I will listen to their weeping and their sadness, I will give them help in their troubles and a cure for their misfortunes. So that this desire of mine may be fulfilled, go to Mexico City, to the palace of the Bishop. Tell him that I have sent you to him to tell him how much I want a house to be built here for me, a church built here at the bottom of the hill.”
When Juan Diego arrived in the city he went immediately to the house of the Bishop, Juan Zumárraga, a Franciscan. But when the bishop heard what he had to say, he did not believe him completely and said “My son, come another time and I will listen to you then. Meanwhile I will consider what should be done about your wish and your desire.”
Another day he saw the Queen of Heaven coming down from where he had seen her. She came to meet him next to the hill, stopped him, and said “Listen, my beloved son, have no fear or anxiety in your heart. Do not try to do anything about your uncle’s grave illness or about any other trouble of yours. For am I not here with you, your mother? Are you not safe in the shadow of my protection? Am I not the source of your life and your happiness? Am I not holding you in my lap, wrapped in my arms? What else can you possibly need? Do not be upset or distressed. Climb again, my beloved son, to the summit of this hill, to the place where you saw me and heard me speak. You will find flowers growing there. Pick them and gather them and bring them down to me.”
Juan Diego came back down with the flowers he had picked. She looked at them, took them with her blessed hands and put them in his tilma, or cape. She told him: “Most beloved son, these flowers are the sign that you are to carry to the Bishop. You yourself are my messenger and I entrust myself to your faithfulness. I strictly command you not to unfold your tilma in front of anyone except the Bishop; but to him you should show what it is you are carrying. As you do so, tell him the story of how I asked you to climb to the top of the hill and pick the flowers there. Tell him everything you saw and marvelled at, so that he will believe you and undertake to build the church I wish for.”
Obedient to the command of the Queen of Heaven, he took the road to Mexico City. He went happily, confident that all would turn out well. Coming into the palace he prostrated himself before the Bishop and recounted all that he had seen and told him the errand on which he had been sent. “My Lord,” he said, “I have done as you asked. I went to my Lady, the Queen of Heaven, holy Mary, the Mother of God, and told her that you had asked for a sign so that you might believe me and build the church that the Virgin herself desires. I told her that I had given my word to bring you back some sign of her wishes. She heard what you had asked and accepted with good grace your request for some sign so that you could fulfil her will. Today, very early, she sent me back to see you.”
The whole city came running to see the holy image. They wondered at it, accepted it as the work of God and made prayers to him. And that day Juan Diego’s uncle, whom the Virgin had cured, told them in what way she should be revered and said that her image should be known as the ever-virgin Saint Mary of Guadalupe.


The first apparition was on December 9th, which is now the feast day of St Jan Diego, and the second, with its miraculous blooming of Castilian roses on a mountain top in mid-winter Mexico and the miraculous creation of the image was on December 12th 1531.


What is so remarkable about this apparition is the very tangible relic of the tilma of St Juan Diego with its image of the Virgin. Not only is there the question of how the image was created, but there is the fact that normally a tilma of cactus fabric would be expected to disintegrate in about twenty years - yet the vision was in 1531, when Mexico was ruled by the Emperor Charles V, King Henry VIII and Pope Clement VII were still arguing about the former's wish for an annulment, but were still in communion and contact, before the deaths of Queen Catherine of Aragon, of Fisher and More, or Anne Boleyn or Luther' and when the future King Philip II was only four and the future Queen Elizabeth I was not yet born.

This evening I am going with friends to an Extraordinary Form Missa cantata to celebrate teh feast at SS Gregory and Augustine in north Oxford.

Labels: Our Lady of Guadaloupe