Today is the 630th anniversary of the death of the English heresiarch John Wyclif at Lutterworth in Leicestershire. He had been living in the parish in his last years, effectively exiled from Oxford on account of the increasing hostility of the authorities in the Church and realm to his increasingly radical ideas. He suffered a stroke whist attending or assisting at the Mass in his church at Lutterworth on December 28th. He was buried in the church and had a tombstone - fragments of it were taken as relics by two Bohemian students in the years that followed. 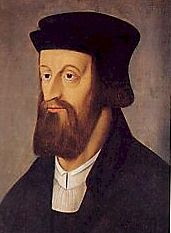 Lutterworth Church.
East view of the church where John Wyclif was rector from 1374 until his death in 1384.
The church formerly had a spire

Following the formal condemnation of his teachings as heretical by the Council of Constance in 1415 the Council orderd that his remains be exhumed and burned. At the tim eteh Bishop of Lincoln, in which diocese the parish lay, was Philip Repingdon, once a fervent admirer of Wyclif at the beginning of the 1380s, but who renounced his Wycliffite ideas in the summer of 1382. 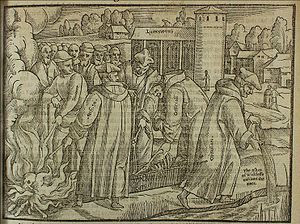 It was under his successor, Richard Fleming, that the remains of the founder of English dissent were exhumed and burned, the ashes being poured into the River Swift. Sympathisers ahve seen this as symbolic of the transmission of his ideas world wide.

One does not have to agree with Wyclif to recognise that in his own time, in the century and a half down to the reformation and then, held up as its great precursor, during the English Reformation, he was and is a figure of importance and with a legacy.