Yesterday I went on a pilgrimage to mark the Year of Faith organised for parishes from the North Oxford Deanery. The idea was to link together visits to places associated with, and indeed the relics, of St Chad, patron of the Archdiocese and cathedral, Bl. John Henry Newman,  and Bl.Dominic Barberi, and to see in them men who had lived by faith.
Our first stop was at the Birmingham Oratory. We joined member sof the congregation in saying the rosary before the  statue of Our Lady, splendidly coped and crowned for May, before Fr Richard Duffield C.O., the main organiser of the pilgrimage, gave a talk about the life of Bl. John Henry and the building of the church - the present structure was erected as a memorial to Newman in the early years of the twentieth century. 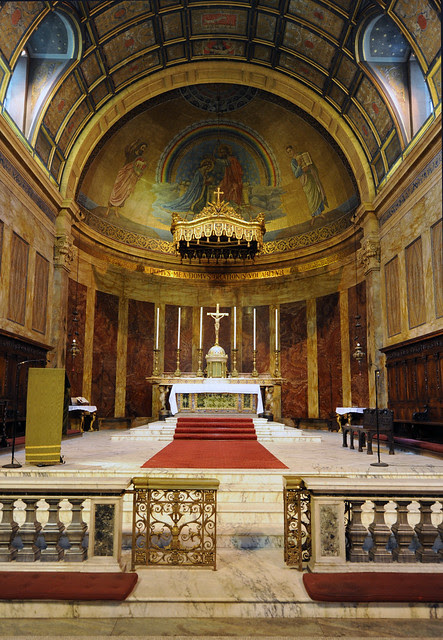 The High Altar at the Birmingham Oratory


We then went through to the shrine chapel, the only part of Newman's church to survive, and redecorated in advance of his beatification in 2010. Here we had atime to pray, to view some relics of the Cardinal, including his mitre and crozier and the bull creating him a Cardinal, as well as seeing the modern chasse that contains such few fragments of bone as were found in his grave at Rednall, and which also incorporates the original handles from his coffin. There are mounted so that pilgrims may indeed touch them to establish a tangible, tactile contact with him. 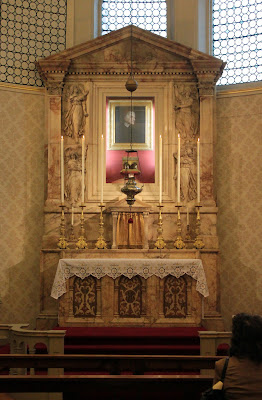 The altar in the shrine chapel of Bl. John Henry Newman


There were too many of us to visit Newman's room, which has been preserved as it was at the time of his death. I have been fortunate enough to do so on three previous visits to the Oratory, and that is very remarkable exprience indeed - it is not areconstruction or redecoration, it is a genuine, undisturbed nineteenth century room, and that of one of the great voices of the age.

I think we could all have spent more time exploring the Oratory church and the other displays about Bl. John Henry, but the exigencies of timing sent us on to the cathedral in the centre of the city for the next stage of our pilgrimage. 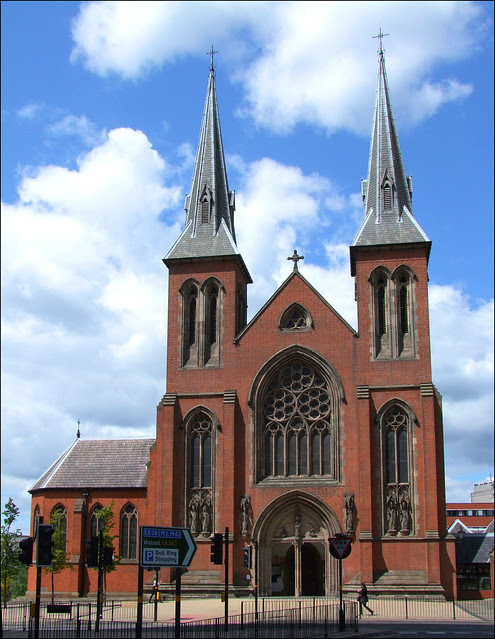 The Cathedral and Basilica of St Chad Birmingham

If the Oratory is wonderfully Philippine in its baroque style and decoration, St Chad's cathedral is one of the great workks of A.W.N. Pugin, and built in 1839-41. In recent years a lot of work has been done to restore and reinstate aspects of Pugin's scheme, and the interior is striking and beautiful. like the oratory church, very much a place of prayer. 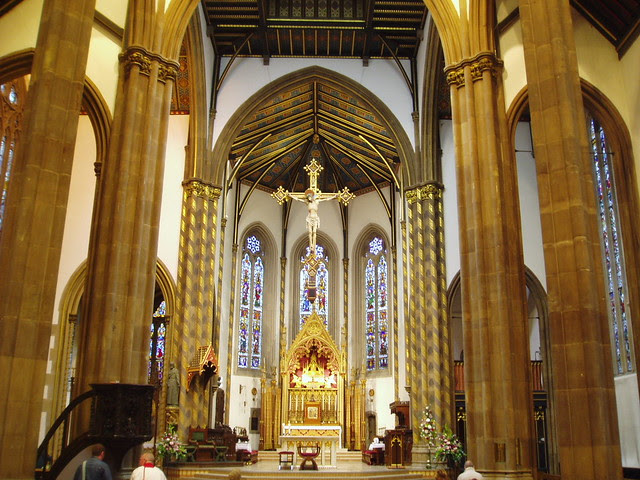 In the cathedral we had a votive Mass of St Chad, whose relics are preserved in the shrine above the High Altar. and time to look around before having our packed lunch and then back into the cathedral for a group photograph on the steps leading to the altar.

The cathedral has some splendid treasures amongst its furnishings, including late medieval items which were acquired from the Low Countries by Pugin. In the oils chapel is a reliquary with some hair of Bl.John Henry, one of his Cardinal's red zucchettos and his ring.

Either side of the steps leading to the altar are the Coenopium or Ombrellino and the tintinnabulum which indicate its status as a Minor Basilica, and honour granted to mark its centenary in June 1941, and about which there is more here.

The last stage of our pilgrimage took us north of the city centre to the inner suburb of handsworth and to the Convent of the Sisters of Mercy, and built by Pugin for them in 1841 on land given bt his collaborators the Hardman family. A daughter of the family, Juliana, became the first Mother Superior of the house, and in those early months the foundress of the Sisters, Ven. Catherine McAuley stayed there, before returning to Dublin to die the same year. 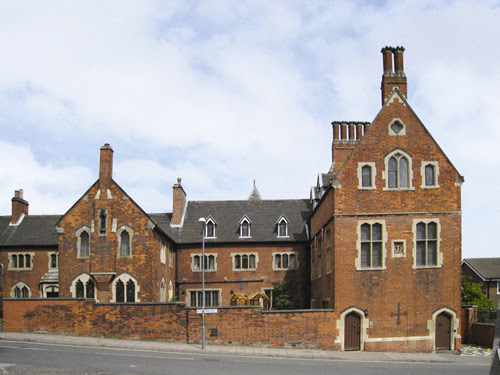 Image: birminghamheritage.org.uk
The convent is typical of Pugin, and was supported not only by the Hardman family but also by his great patron the 16th Earl of Shrewsbury. The church to the east which served as both the sister's church and as parish church was, alas, wrecked by a bomb in 1942, which also destroyed the House of Mercy which had provided shelter for vulnerable women. The descending cloister whuich linke dteh convent and church, atypically Puginesque feature, survives in part, and there are pictures of the lost church - rather like those he designed in Marlow and in Salisbury - on display in the extended house chapel, togetehr with examples of Hardman plate and furnishings.

In the chapel is a chair and table which were used by Bl. Dominic Barberi when he visited the Sisters as their Extrordinary Confessor. It is also known that Bl. John Henry Newman used to visit the convent as a place of quiet.

Today the conevent continues to work with the local community, serves as a focus for Mercy Associates, and also is a heritage centre, open to visitors, which recounts the history of the Sisters in Handsworth and in the life of the Church and country.

The whole pilgrimage was very enjoyable, and we were blessed with beautiful weather, and the sight of the countryside finally bursting into leaf and flower as we travelled to and from Birmingham.