Today is Trinity Sundaya day to celebrate and to attempt to reflect upon the ineffable nature of the Godhead.

This type of depiction of the Holy Trinity was very popular in the late middle ages, and popular in alabaster carvings for churches, tombs and domestic use. However it became the object of particular hatred to Lollards and other such heretics, who saw it as breaching the Second Commandment and as being idolatrous, and increasingly fell out of favour in the Catholic Church at Trent because it was open to such theological misunderstanding.

I have posted paintings by Robert Campin before, both because I like them as works of art and devotion and because they are works produced in a period in which I have a particular interest as a historian.

Three works by Campin - a Standing Virgin and Child, Saint Veronica, and Holy Trinity (all now in the Städelsches Kunstinstitut, Frankfurt) - were wrongly thought to have come from a non-existent abbey at Flémalle, near Liège giving rise to the creation of an anonymous Master of Flémalle. It is now generally agreed that this painter is identical with Robert Campin.
Campin's origins and exact date of birth remain obscure. In 1410 he acquired his citizenship in Tournai, where he was already working as a painter by 1405-6. He was dean of the Guild of Saint Luke between 1425 and 1427 and was elected to the town council. Probably the head of a large workshop, Campin accepted commissions from city officials, churches, and the bourgeoisie, made designs for banners, coats of arms, and costumes, and sometimes produced manuscript illuminations. He had two famous pupils, Rogelet de la Pasture (Rogier van der Weyden) and Jacques Daret, both of whom worked for him until 1432. The early works of Rogier and those of his master are sometimes confused.
A triptych with the Lamentation (Courtauld Institute Galleries, London) is considered the earliest of his works. Among the latest is the Von Werl Altarpiece, dated 1438 (Prado, Madrid), sometimes ascribed to Rogier. While the Annunciation Triptych has traditionally been viewed as a key painting by the master, its attribution within the Campin group, is a matter of controversy. Campin's influence was widespread, and some of his compositions were frequently copied well into the sixteenth century.

Here is an example of a textile of the Holy Trinity by Campin. Worked in  gold. silver silk embroidery, pearls, glass beads and velvet on linen it is dated to 1433 and is now in the Kunsthistorisches Museum Vienna: 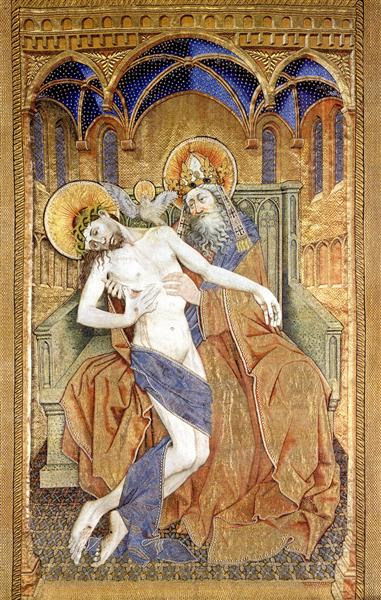 Here is a list of other paintings by Campin together with links to them: