Pope Celestine VAn early mural painting and the new face mask
Image:news.discovery.com
I see from a post on the Medieval religion discussion group that over the course of several months the remains of Pope Celestine V - St Peter of Morrone  - have been examined, and a new funerary mask has been created. Born in 1215, and a hermit-monk, he was elected as Pope in 1294, and abdicated later on that year, and died as, in effect, a prisoner of his successor, Pope Boniface VIII, in 1296. He was canonised in 1313, and his feast day falls on May 19th.
There is an illustrated introduction to his life here, and there is another one here, with some additional illustrations.  A further account, with amore hagiographic emphasis with more pictures can be found on the link to the blog post here.
The remains are preserved at L'Aquila and survived the serious earthquake there in 2009, and indeed were visited in its wake by Pope Benedict XVI, who have his inauguration pallium for his predecessor to wear: 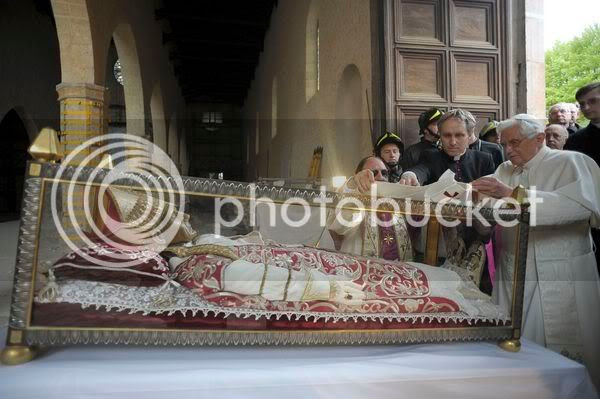 Amongst the results of this latest examination of the relics was  confirmation (not for the first time) that the hole in his skull was made after his death, and so he definitely was not murdered, according to legend, by having a nail driven into his skull.

The skull of Pope Celestine V
Image: archelaos.com
The examination also indicated his height - five foot five inches - and much of his medical history.
A careful study was done of his cranium, leading to afacial reconstruction. However this was of a fifty year old, so the artist who made the silver mask had then to interpret that to produce an idea of what he looked like at the time of his death, when he was eighty or thereabouts.


There is an account of the discoveries in English here and two more accounts, with different illustrations, in Italian here and here.

Fascinating. What was the purpose of this death mask? To replace the one currently on the Saint or was this just an academic experiment?

I gather the reason was that the previous mask was a face of Cardinal Confallonieri, sometime Archbishop of L'Aquila, and lastly Dean of the Sacred College in 1978. As a mask it covers the skull as shown in the photograph, and I assume the idea was to use modern technology to produce a face corresponding to that of Peter of Morrone/Pope Celestine V.