The Akathistos Hymn at Pusey House on May 28th

On Tuesday next week, May 28th,  Pusey House is hosting at 5 pm a joint event by the Ecumenical Society of the Blessed Virgin Mary and the Fellowship of St Alban and St Sergius when Bishop Kallistos Ware, Bishop of Diokelia  will give an introductory talk and lead the singing of the Akathistos hymn to the Most Holy Mother of God.

The text of this great sixth century hymn to Our Lady can be read in translation here.

Literally akathist means standing - this is a devotion during which one remains on one's feet because of its solemnity. 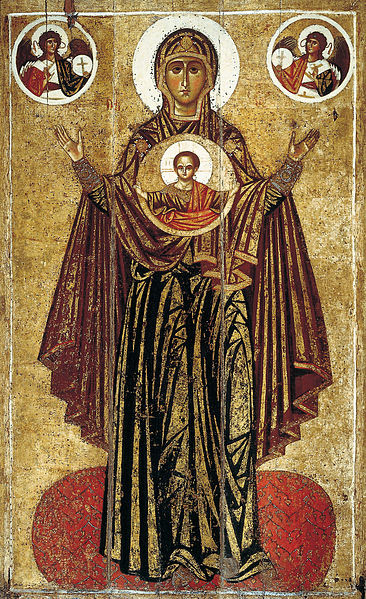 Image: Wikipedia
When the word akathist is used alone, it most commonly refers to this, the original hymn known by this name. This, the sixth century Akathist to the Theotokos , is attributed to St. Romanos the Melodist. The tradition is that the Theotokos appeared to him, gave him a scroll and commanded him to eat it. The result was a miracle: Romanus received a beautiful, melodic voice and, simultaneously, the gift of poesy.

This hymn is often split into four parts and sung at the "Salutations to the Theotokos" service on the first four Friday evenings in Great Lent; the entire Akathist is then sung on the fifth Friday evening. Traditionally it is included in the Orthros (Matins) of the Fifth Saturday of Great Lent, which for this reason is known as the "Saturday of the Akathist". In monasteries of Athonite tradition, the whole Akathist is usually inserted nightly at Compline.

The four sections into which the Akathist is divided correspond to the themes of the Annunciation, Nativity, Christ and to the Theotokos  herself.
The hymn itself forms an alphabetical acrostic—that is, each oikos begins with a letter of the Greek alphabet, in order—and it consists of twelve long and twelve short oikoi. Each of the long oikoi include a seven-line stanza followed by six couplets employing rhyme, assonance and alliteration, beginning with the greeting Chaíre and ending with the refrain, "Rejoice, Bride without bridegroom!" (also translated as "Rejoice, thou Bride unwedded!") In the short oikoi, the seven-line stanza is followed by the refrain, Alleluia. The Salutations to the Theotokos service, often known by its Greek name, the Χαιρετισμοί/Chairetismoí  (from the Χαίρε/Chaíre! so often used in the hymn), consists of Compline with the Akathist hymn inserted. It is known in Arabic as the Madayeh.

As next Tuesday is the eve of 560th anniversary of the fall of Constantinople in 1453 this seems a not inappropriate day on which to celebrtae the glories of Byzantine liturgy and culture.

In the Arabic-based Greek churches, the Melkite Catholics and Chalcedonian-Orthodox in Antioch, they sing "Hail, oh Virgin and Bride ever pure!" as the refrain,