The reception of Newman in France

Earlier this evening I went to the annual Oriel Newman lecture in the college. The speaker was  Fr Keith Beaumont of the Oratory of France, an organisation inspired by that of St Philip, but established on rather different lines in 1611.

His subject was the reception of Newman in France since the 1840s. This was an excellent talk by an expert, and it contained too much to give here at length - we were provided with a full and useful set of notes t accompany the delivery of the elcture - so I will confine myself to a summary. 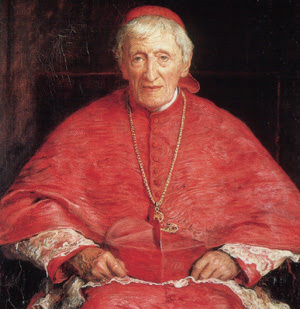 Fr Beaumont saw three main themes or views in the French awareness of Newman. The first was of the brilliant and indeed controversial Anglican don who converted to Catholicism in 1845. Many of his works were translated - in some cases very badly indeed - in these years, and his particular appeal was as an apologist, someone the French church could enlist to reconvert a nation that was still recovering from the serious attempt to de-Christianise it during the worst excesses of the French Revolution. After 1870 the French were too preoccupied with their own internal turmoils to pay as much attention to the works of Newman,and his later writings did not attract translators.

The second themes was in the misunderstanding of Newman in the Modernist crisis. Those rightly or indeed wrongly accused of those errors could look to some of Newman's ideas, or at least their expression as a seemingly kindred spirit. Newman himself believed in a continuing tradition that developed so as to remain faithful to itself, not as Modernist apparently did, in one that merely developed as a historical process. In this matter Newman was unfortunate in attracting the interest of Fr Henri Bremond, who wrote extensively about Newman but, in Fr Beaumont's view, in a very flawed way, as one who saw Newman only in terms of his psychological insight and not as a defender of  received truth. The result was to associate Newman in the eyes of many in the Vatican with Modernist tendencies. This was despite Pope St Pius X's explicit exoneration of Newman in a letter to an Italian bishop of any charge of Modernism, but that remained little known at the time and for along period afterwards.

The third, contemporary view can be seen to derive from the work of Fr Louis Bouyer of the French Oratory in the 1950s. This re-established Newman's coherence as an orthodox thinker worthy of interest, and led to a group such as the Amies de Newman who publish a journal of studies and encourage work on the Cardinal.

Fr Beaumont thought part of the limiting factor in the French perception of Newman was a failure to understand the complex nature of Anglicanism, either in the era of the Oxford Movement or today.  There are also humorous misunderstandings, such as publishers who seek to Germanisize him as  John-Henry Newmann...

In his view the point that was often missed about Newman was that people concentrated on one aspect of him rather than the totality - they saw the theologian, the pastoral figure, the preacher, but not that all were one and the same man, integrated around his essential faith.

Fr Beaumont expressed his personal prayer  for the canonisation of Bl. John Henry, so that he could be also proclaimed eventually as a Doctor of the Church.

Following the lecture there was a lively and interesting series of questions to the speaker - including references to Newman's own attitude to France, notably travelling across Paris in 1833 with the carriage blinds down so as not to see the hated tricoleur, symbolic of the 1830 revolution, which had so concerned him and others as a warning to the British estabishment.

As is the custom on these occasions there was a reception afterwards and the chance to meet both Fr Beaumont and others, many of them old friends from Oriel or the Oratory.

Hi Keith
Your comments are, as always, true to your own faith. Wonderful to see. Have finally found you again on the Net and was showing the children your picture.
Love
your sister
Christine