Twice yesterday in Oxford I was able to attend celebrations according to the Extraordinary Form of the Feast of Corpus Christi on its traditional day.

At 12.15 I attended the Low Mass at the Oxford Oratory celebrated by the Provost Fr Daniel Seward. He was wearing a particularly fine golden chasuble, in a Roman cut but with orphreys bearing embroidered figures of saints in the  late medieval style. I do not think I have seen this vestment in use before at the Oratory - it is certainly a handsome addition to the collection.

The Mass attracted a reasonable number in the congrgation, with wide selectioon of ages, toddlers through to the elderly, although I think numbers were reduced by the fact of there being the evening Mass at SS Gregory and Augustine, which I was also due to attend.

After a session in the Oratory lodge and shop as a porter, a voluntary activity I always enjoy, I went with a friend for afternoon tea at a nearby restaurant - a civilised way of celebrating the feast we thought.

Thus replenished we got the bus up to SS Gregory and Augustine in north Oxford in good time for the 6pm Mass, to be celebrated by Fr John Saward, and at which I was due to serve.

This, it emerged was to be a Missa cantata, and indeed a Mass in the Presence of the Blessed Sacrament Exposed. Much work had been in preparation, with the cghurch handsomely decorated with flowere in the style the church usually adopts - an emphasis on small scale, country flower arrangements. My eye was especially caught, as was no doubt it was intended to be, by the ears of wheat flanking the monstrance containing the Blessed Sacrament, and above it a crown of thones decorated with tiny red flowers. In front of the altar there was a carpet of flowers representing a host and chalice, and one which managed to survive surprisingly well the passage of the celebrant's feet.

There was a good congregation, making for well filled church, drawn from the parish and from wider afield, and fine music sung from the west gallery.

I was a torch bearer at the Mass and for the procession. The  weather was kind, and so,  unlike last year, we were able to process around part of the grounds of the church, with a station at an altarino set up in the baptistry at the west end.

Oriel was well represented with a member of the SCR as an acolyte, myself from the MCR as a torch bearer and a JCR member as thurifer - a fairly unusual coincidence I should think.

Afterwards there was a reception in the parish hall and an opportunity to catch up on news from friends, before agroup of us returned to the city centre for coffee and further refreshment and talk. All round a very good celebration of this feast day.

The parish website has some pictures of the Mass: 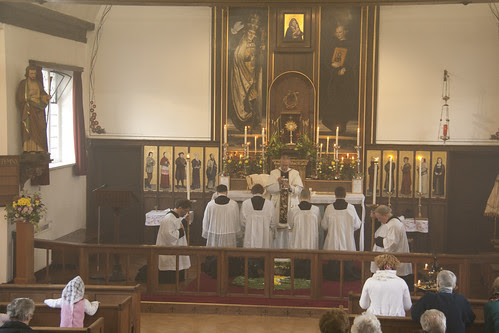 Rather unfortunately the Clever Boy is all too prominent on this other photograph, but ignore me and admire the carpet of flowers: 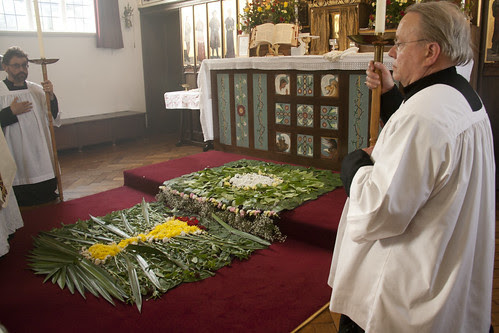 The carpet of flowers for Corpus Christi, and the newly painted Altar Frontal.

For more photos of the Mass and Procession click here.
There are three Extraordinary Form Masses this coming week at SS Gregory and Augustine: Wednesday June 5th and Friday June 7th at 6 p.m. as usual, and the First Thursday Votive of Our Lord Eternal High Priest at 12 noon on June 6th.  The latter, inspired by the teaching of Pope Pius XI, gives a monthly opportunity to pray for priests.
The following Sunday, June 9th, (this month the second rather than third Sunday) there will be a Sung Extraordinary Form Mass at 12 noon.