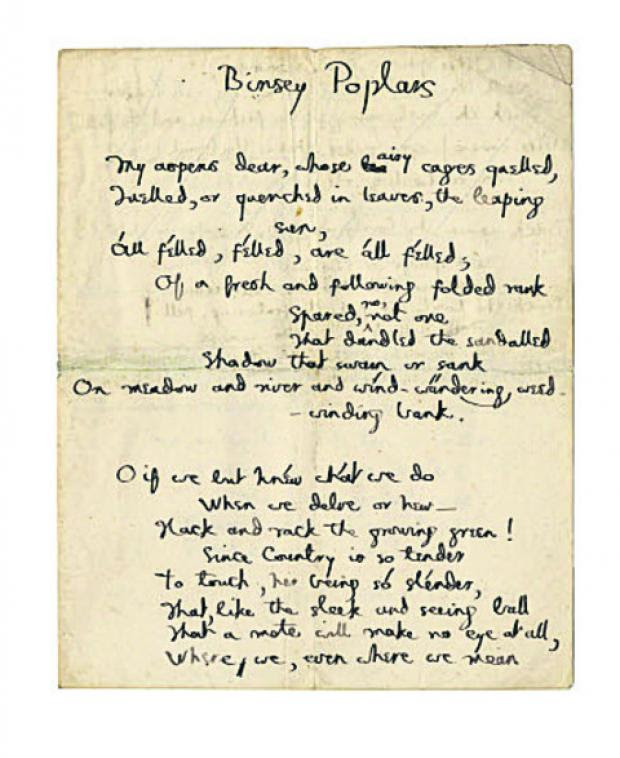 The last known major Hopkins manuscript to have been in private hands, ‘Binsey Poplars’ is the most significant Hopkins item to have come to the market in over forty years.

A Balliol man who converted to Catholicism whilst at Oxford, Gerard Manley Hopkins (1844-89) is regarded as one the Victorian era's greatest poets. Very few of his poems appeared during his lifetime, and he owes his posthumous reputation to his friend the poet Robert Bridges, who edited a volume of Hopkins' Poems that first appeared thirty years after his death in 1918. His revolutionary ‘difficult’ style, characterized by new rhythmic effects, influenced the work of Modernist and later writers. 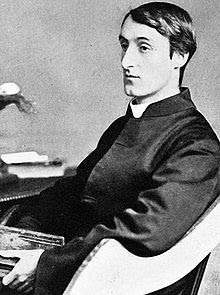 'Binsey Poplars' was written in response to the felling of trees running alongside the Thames in Binsey, a village on the west side of the city of Oxford. Hopkins was a curate at St Aloysius Church in the city when he wrote the poem. The trees were replanted after the poem was first published in 1918 (the poem seems to anticipate the ravages of the Great War), and there was an outcry which I recall when they were felled again in 2004. The poem formed part of the successful campaign to replant the trees. The poem has a very particular local meaning but speaks to a much broader audience in its plaintive evocation of spiritual desolation through the destruction of nature.

The only other known manuscripts of ‘Binsey Poplars’ survive in four copies kept in the Bodleian. The Library stresses that the textual importance of this newly acquired manuscript cannot be overstated. It has never been properly studied and presents critical evidence of the evolution of one of the most celebrated poems in the modern English literary tradition. It includes important unrecorded and unpublished reconsidered readings, with extensive autograph deletions, revisions and repetitions.

Dr Christopher Fletcher, Keeper of Special Collections, Bodleian Library, said: "The Bodleian holds the world’s most important collection of manuscripts by Gerard Manley Hopkins. It is wonderful to be able to add this draft of one of his most celebrated works to that collection. The various revisions in the draft, particularly when studied alongside the other drafts, give us a remarkable insight into how the poet crafts his passionate lament on man's disregard for the sanctity of nature. It’s an enduringly relevant poem everyone should know."

I studied Hopkins for A-level English, and whilst I did not get a lot out of him then I recognised that in him and T.S.Eliot were the two amongst the poets we studied in whom I was aware of something powrful and insightful. I am still, forty years on, meaning to return to studyin them properly... Occasionally I do a little, and find them to be a very rich vein to explore. Anyway, worshipping at Hopkin's former church and a member of a college adjacent to Eliot's Merton I really have no excuse - other than laziness - for not looking further at these two writers.