Yesterday I went up to London to meet a friend and go the see the National Portrait Gallery exhibition The Lost Prince about the life and death of Henry Prince of Wales. I posted about him in November 6th with Henry Prince of Wales on the 450th anniversary of his death. 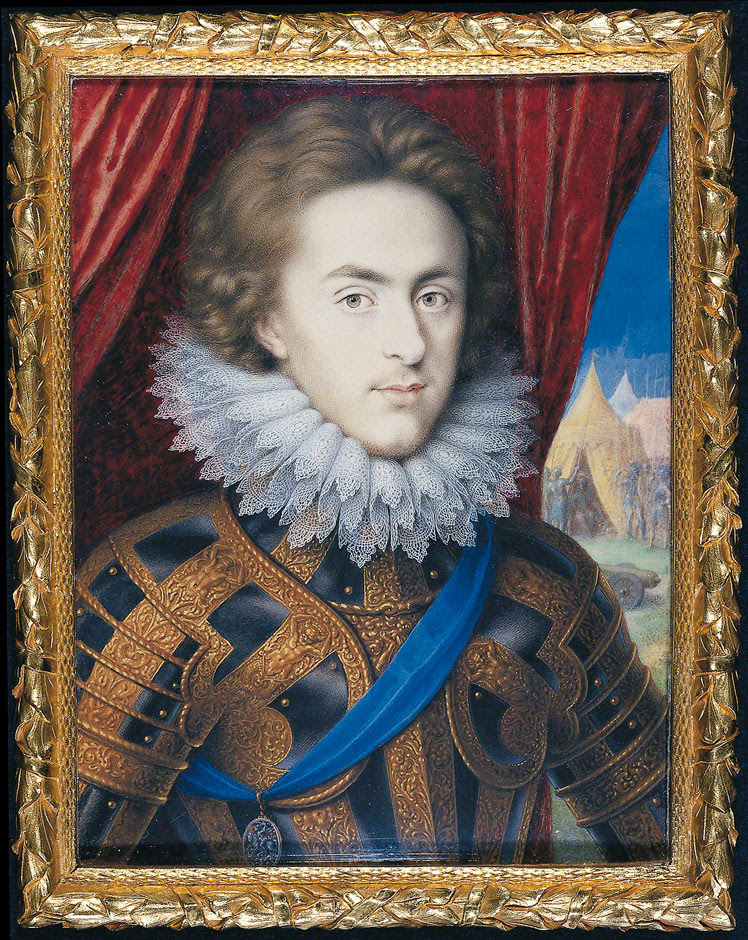 Henry, Prince of Wales by Isaac Oliver, circa 1610-12
Miniature in the Royal Collection

We began by looking at the Tudor and Stuart portraits in display in the permanent collection in the gallery. Shame to tell I had not visited the collection before, and it was a genuine delight to see pictures one knows so well from photographs in books in reality. What was especially impressive was their superb condition and lighting, as well as the presence of some less well known portraits or personalities.

The exhibition on Prince Henry was very well worth seeing, with portriats and artifacts from the Gallery, the Royal Collection, the Naval Museum at Geenwich and the British Library and other collections.

In addition to portraits of the Prince, his immediate family, Danish relatives and his courtiers items on show included two of his suits of parade armour from the Royal Collection, some of his letters and exercise books, books presented to him, texts and illustrations for masques which celebrated the Prince and his part in national renewal and works of art he had collected. There were examples of the numerous memorial pieces in literatrure and music producedin the widepread grief at his death and the remains of his funeral effigy from Westminster Abbey. This was made to be dressed in the robes he had worn as Prince of Wales at his Investiture in 1610 - the splendidly illuminated Letters Patent showing the Prince receiving his symbols of rank from his father was also on display -  and suggests that he was of middling height rather than tall. Also in this section was the portrait commissioned by King Charles I as a memorial to his brother and copied from the miniature reproduced above which hung in the King's bedchamber at Whitehall thereafter. That, and a small volume of advice presented to the future King Charles II  on the eve of the Civil War advising him to model himself on his uncle, indicated the posthumous presence of the Prince at the Stuart court.

Departing with acopy of the handsome exhibition catalogue we went for a leisurely lunch at the Oxford and Cambridge Club in Pall Mall before an excursion into terra incognita for me as my friend went looking for computer cablesand such like in theTottenham Court Road.

A thoroughly enjoyable and educationally informative day, and it is to be hoped that this exhibition helps to reinstate Prince Henry in the national historical conciousness and understanding.