Today is the appointed feast day for St Charlemagne. You did n't know he was a saint?
He was canonized by the Anti-Pope Pascal III at the behest of the Emperor Frederick I (Barbarossa) on December 29th 1165 and despite being elevated by an Anti-Pope enjoyed a modest cult in the middle ages - particularly in the area around Aachen, but in other parts of Germany as well. He was certainly esteemed by the Holy Roman Emperors as their saintly patron, in a way analogous to the respective devotion to St Edward the Confessor, St Stephen of Hungary, St Olav of Norway, St Weneslaus of Bohemia and later St Louis in France. 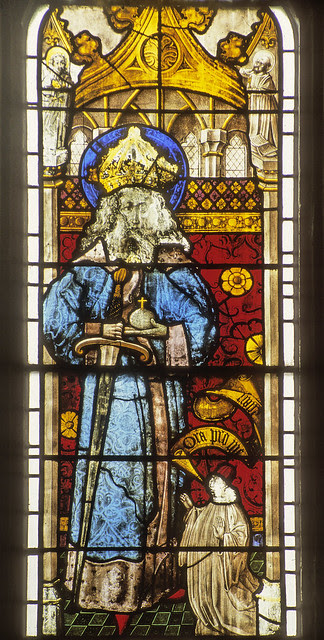 The Emperor Charlemagne shown as saint with a blue nimbus.

This panel of 1479 originates in the cathedral of Trèves or Trier. It is now in the church of St Mary in Shrewsbury- south aisle of nave, easternmost window.

Note the red pileus (biretta) of the donor. In my post Another red pileus I comment about this type of headdress as shown in another of these German panels in Shrewsbury as I do also in Conferring the Diaconate.

There is an English glass figure of St Charlemagne of the period 1500-17 in the clerestory of the nave of Fairford church in Gloucestershire.